Hotel Majapahit Surabaya – Worth The Trip To East Java

I stumbled across this hidden gem of a hotel in a non-conventional way. I was doing research for an article about the cheapest 5-Star hotels in the world, and the Hotel Majapahit came up.

I instantly fell in love with everything about it, from it’s rich history to it’s unique architecture, not to mention it’s value.

Early that year I had toured all through the island of Bali, but my knowledge of Indonesia stopped there. I started researching Java,  the island that the Majapahit Hotel is located on, and realized just how much of Indonesia’s culture I had been missing out on. I sat my husband down, pointed at some photos of the Majapahit and said “This place is calling our names. We have to make a trip to Java!” An off the beaten path luxury pick? He was instantly on board.

From Bali, you can fly direct in under an hour to Surabaya, Indonesia’s 2nd largest city and home to the Majapahit Hotel. But of course we didn’t want it to be that easy. Instead we decided to drive from Bali to Surabaya. 1 ferry ride, 2000 potholes and 14 hours later, we arrived at our unbelievable destination. 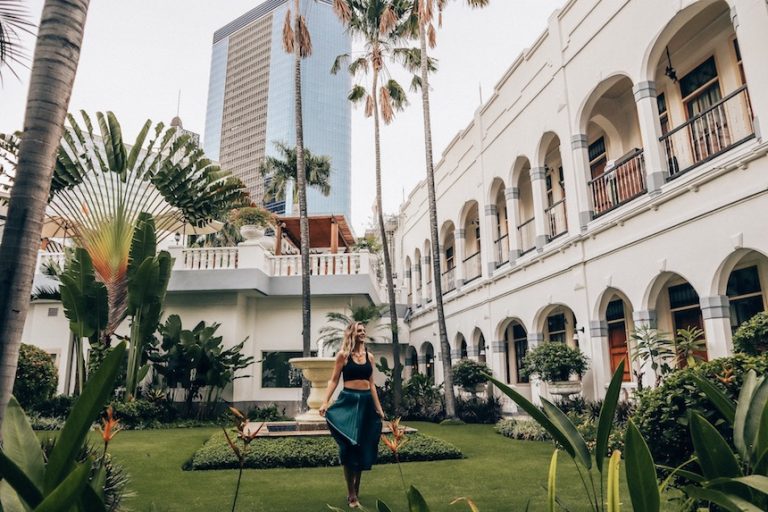 Review of the Majapahit Hotel Surabaya

If you can appreciate the good old days, the Majapahit Hotel will be the highlight of your trip to Surabaya. For some hotel lovers, it might even be reason enough to make the trip in the first place.

We recommend the Majapahit Hotel to travelers who: 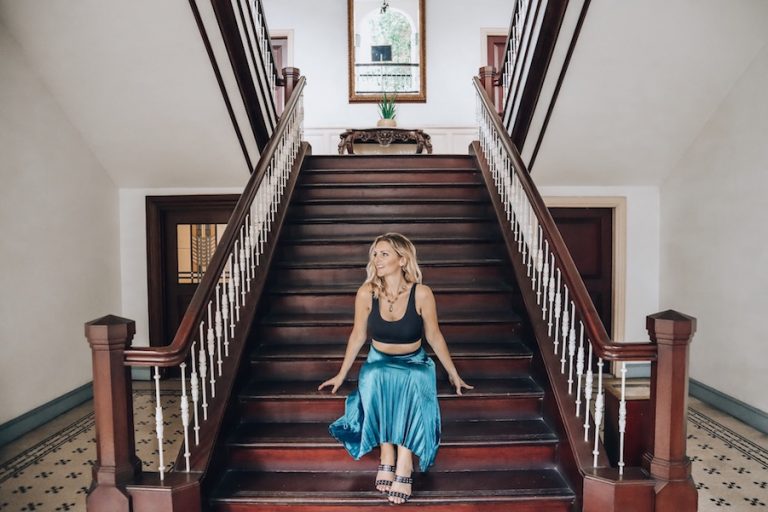 History of the Majapahit Hotel

‘Hotel Oranje’ as the Majapahit was originally called, was constructed in 1910 during the Dutch occupation of East Java. The Sarkies brothers, who were Iranian born hoteliers, built the Hotel Oranje, adding yet another luxury property to their South East Asian hospitality empire.

The entire project cost about $5 million dollars converted into todays currency, which is a steal of a deal considering how massive the grounds are.

Throughout the entire 20th century the hotel was expanded, renovated, occupied, sold, bought, and renamed many times. Expansions were made in the 20’s and 30’s with a new Art Deco flare that brought in celebrities and royalty from across the world, including Charlie Chaplin. In the 40’s the Japanese occupied Surabaya, renamed the building ‘Hotel Yamato’, and used it as their headquarters. In 45’, just after the war ended and the Japanese fled, the hotel was renamed once again to ‘Hotel Merdeka’, meaning ‘independence’. The Indonesian people of East Java didn’t want the Dutch rulers gaining back control after the Japanese occupation. They tore down the dutch flag and erected their own red and white flag, taking back control of the hotel. Throughout the 50’s until modern day, the hotel went through Dutch and Indonesian ownership, renovations, and was eventually made a National Landmark of Indonesia as the ‘Hotel Majapahit’.

The Majapahit Hotel is now an award winning destination resort managed by Accor Hotels, and will always remain an important part of Java’s rich history. 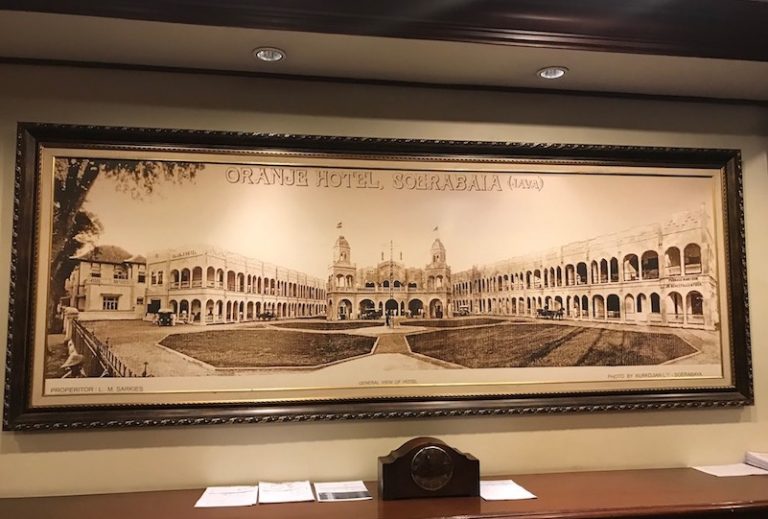 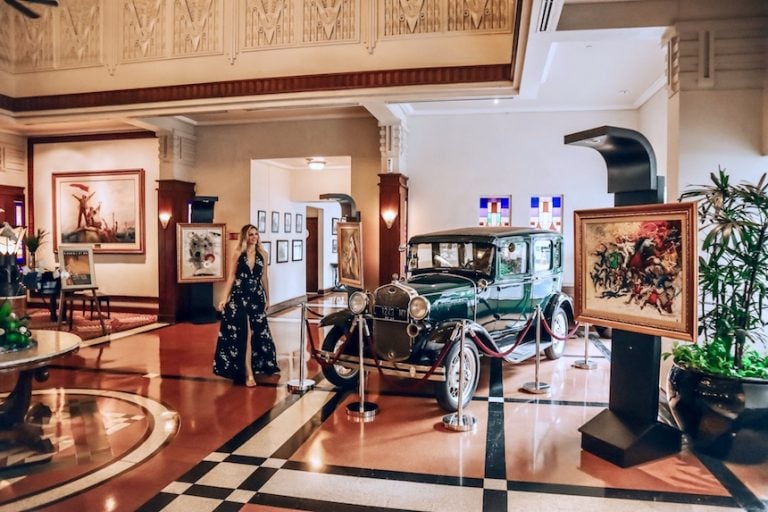 Why We Stayed at the Majapahit 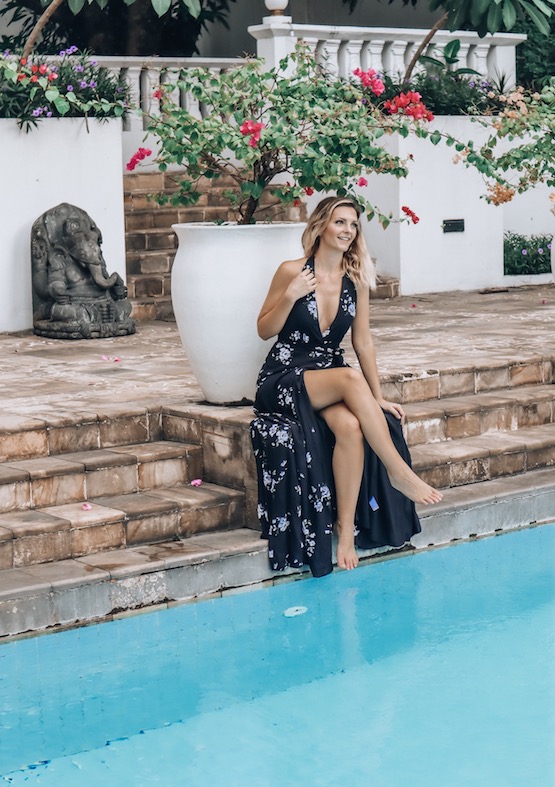 The Majapahit Hotel has 143 rooms in 4 categories.

Rates start at only $58 for standard rooms at this iconic property. That makes it one of the cheapest 5-star hotels in the world!

The hotel gave us a complimentary upgrade to the Presidential Suite….ha! In my dreams they did! This suite goes for about $2000 USD per night, so not something you can score an upgrade to. But do you blame them? I mean, just LOOK at this place!

While we didn’t get to STAY in the palatial presidential suite, we did get to tour through it. It is, without a doubt, the most enormous hotel room I have ever seen in my life.

At almost 9,000 Sq Ft and sprawling to entire levels of the hotel, this suite is certainly fit for royalty. 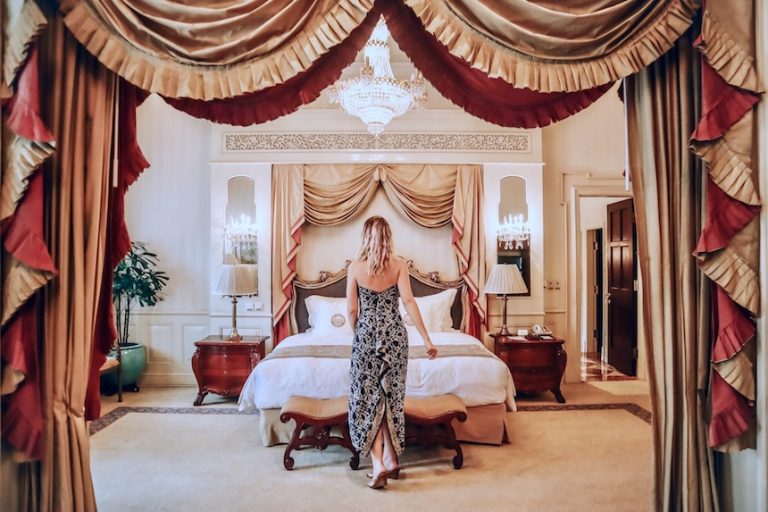 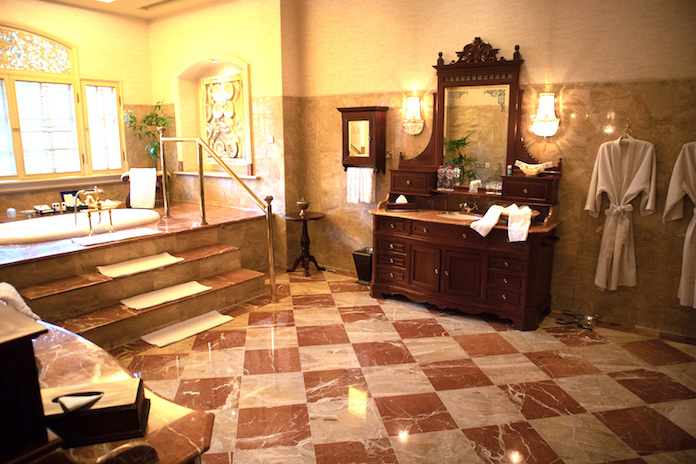 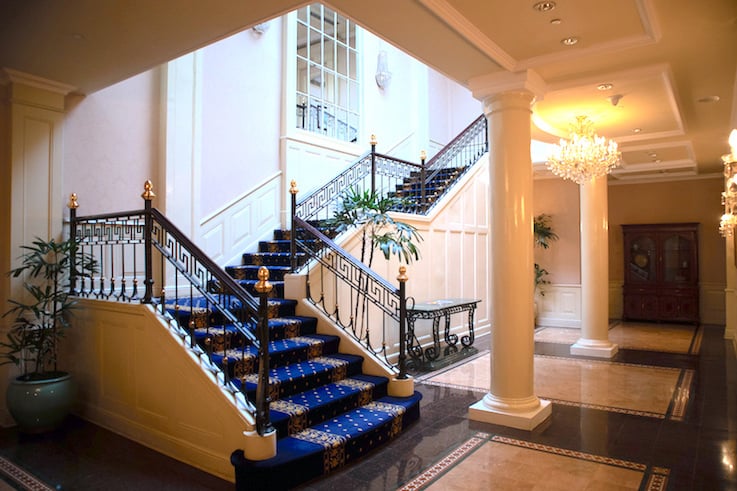 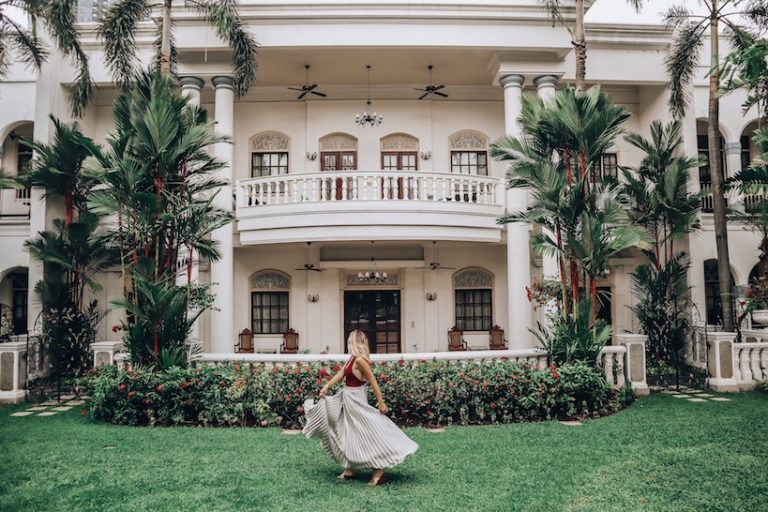 … Yes the entire building behind me is the Presidential Suite!

Okay, now that we are back down to Earth, here is the room we actually stayed in, the Heritage Suite.
This is a step up from their standard ‘Classic’ room and very spacious for a downtown hotel.
Rates for this suite start at a modest $69 USD per night, making this a luxurious steal of a deal.

This suite had a separate sitting room beside the bedroom, which made it grand and extra comfortable. The bathroom has every woman’s stamp of approval with a soaker tub on one side and a marble shower on the other.
One of my favorite parts of the room was learning that most of the furniture was from the 1930’s. I am a sucker for antique desks and solid wood wardrobes.
Outside the front door we had a small patio that overlooked the grounds, as well as the monumental presidential suite. 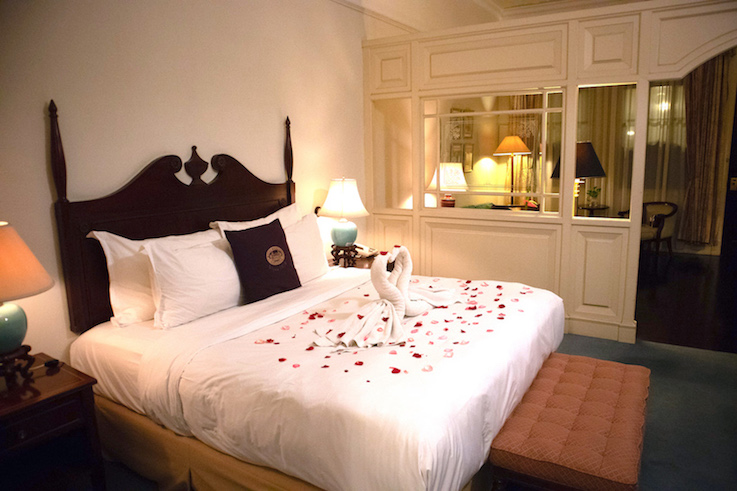 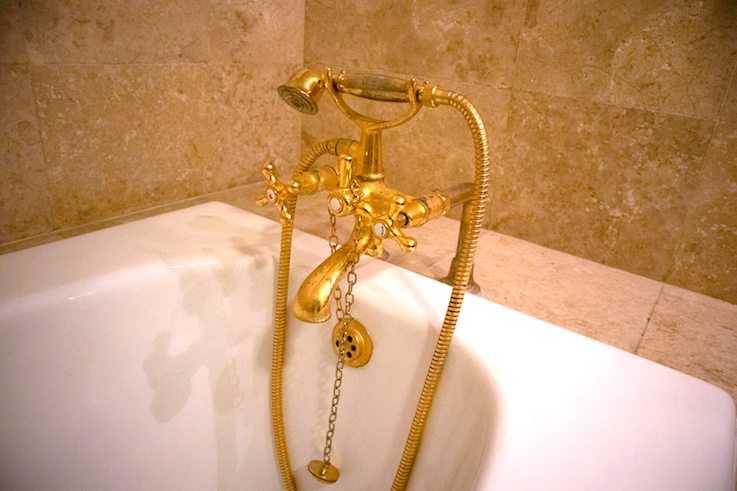 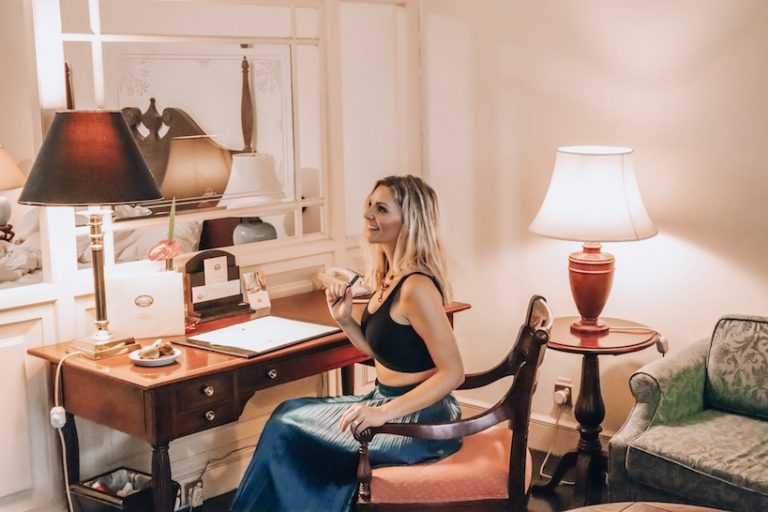 There were many things that impressed us about this hotel, but here is some insight on our favorite bits:

You will never realize how vast these grounds are until you see them for yourself! What a rare and unique feature to have lush gardens and sprawling square footage in the middle of the city.
My husband has a major fear of elevators which always has us in search of low rise hotels. Usually that means we have to sacrifice location, as most inner city hotels are towering skyscrapers.

The Majapahit Hotel is a one in a million chance to stay downtown without a massive tower. Instead, you get a view of the modern city that has grown up around it, while staying in the calm retreat of the estate-like grounds.

Around every corner we found a jungle like courtyard, romantic garden or perfectly manicured lawn. The entire property is an immaculate work of art that made us feel like we’d time traveled to another era. 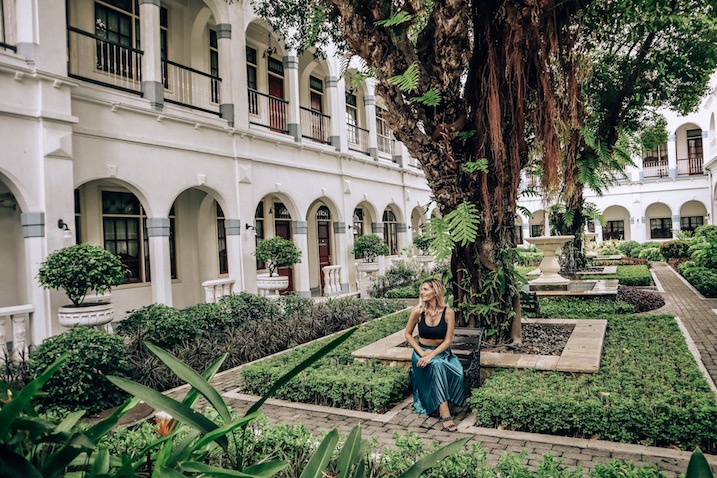 I gave a brief summary of the history above, but it goes so far beyond a short synopsis. Just walking through the corridors and preserved lounges is a history lesson in itself. There was one room in particular that had a picture on the wall, showing it still looked EXACTLY the way it did back in the 1920’s.

The hotel gives 2 tours a day that divulge all the hotels secrets and tales of the past. I highly recommend joining in on a tour, as it enhances the experience of the stay!

The Pool
The Majapahit isn’t joking around when it comes to their swimming pool. Just like the rest of the property, the ‘go big, or go home’ size of the pool is ultra luxurious!
It’s enormous size and perfect temperature is the best way to cut the Surabaya heat.

The Spa
Full disclosure, we did not go to the spa, but that doesn’t mean I didn’t want to. In order to get to the pool, we actually had to walk through the spa and it looked wonderful! I read through some of the reviews on TripAdvisor and most rave about the treatments. I have to admit it would have complemented our stay, but we ran out of time.

The Gym
In the past 12 months, we’ve spent 4 of them touring Indonesia. I’ve only come across 1 gym nicer than this one in the whole country. Very well equipped! 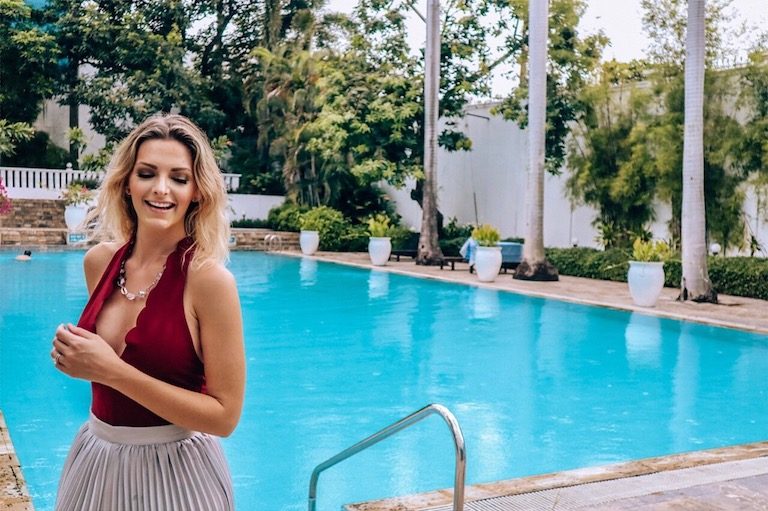 There are a ton of restaurants within walking distance, but we spent most of our time dining in.

The Majapahit has a few different places on-site to choose from.

Sarkies is a more traditional dining setting with a great dim sum menu. The night started off with steamed peanuts, fried wontons, and red bean paste rice balls. Next we had noodles, spicy chicken Chinese style, and cashew veggies in a taro bowl.

Indigo is s great spot for lunch, offering both Western and Indonesian food.
Mid-day we ordered pizza, shrimp cocktail and some delicious mocktails.

The Maj bar is the perfect pub to grab a drink and some comfort food.
Our first night we arrived at the hotel late and grabbed some burgers, wings and potato wedges while a live band played.

And of course, their rooftop restaurant has the biggest and best breakfast spread I have ever seen!
Literally the biggest.
So much selection and choice I don’t know where to start. I can guarantee, if you like to eat it for breakfast, they have it! 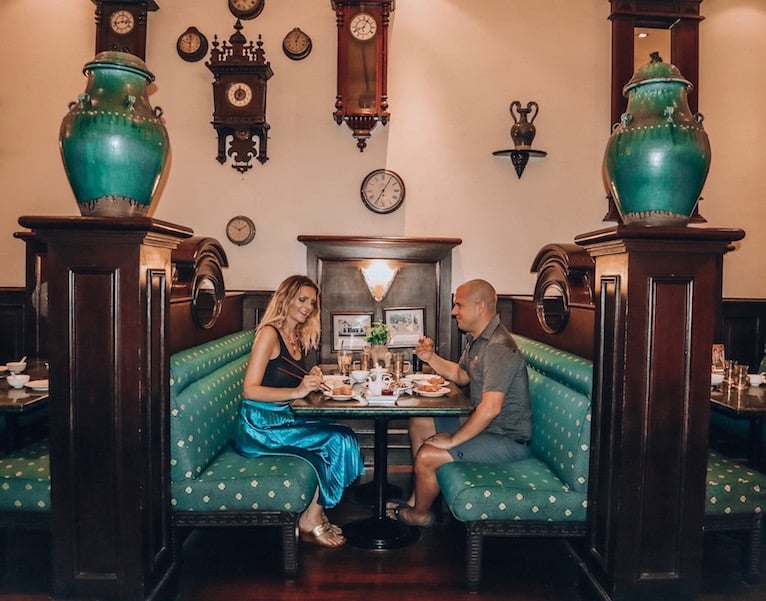 You couldn’t get any more downtown if you tried! That is the true benefit of staying in a historic hotel. The land was bought a century ago and the city grew up around it.
Staying here gives you access on foot to many attractions, restaurants and shopping malls. If you rented a car to take day trips to the surrounding area, they do have a parkade on site.

We loved being able to stay downtown but still feel like we were staying in a tranquil retreat. Such a great mix!

The WiFi could use an upgrade. I don’t really blame the hotel, as old buildings were constructed with heavy and quality materials that are the enemy to internet connectivity. However, there are some modern workarounds the property should take into consideration. The WiFi worked, but just not very well. Speeds were slow and inconsistent.

One other thing I didn’t like: They allow smoking INSIDE in The Maj restaurant. With no open windows, it was (to me a non-smoking Westerner), disgusting. Even though we were enjoying the live music and our food, once people lit up, we took our plates and moved to the lobby. Thankfully, all the other restaurants, along with the rooms, are non-smoking! 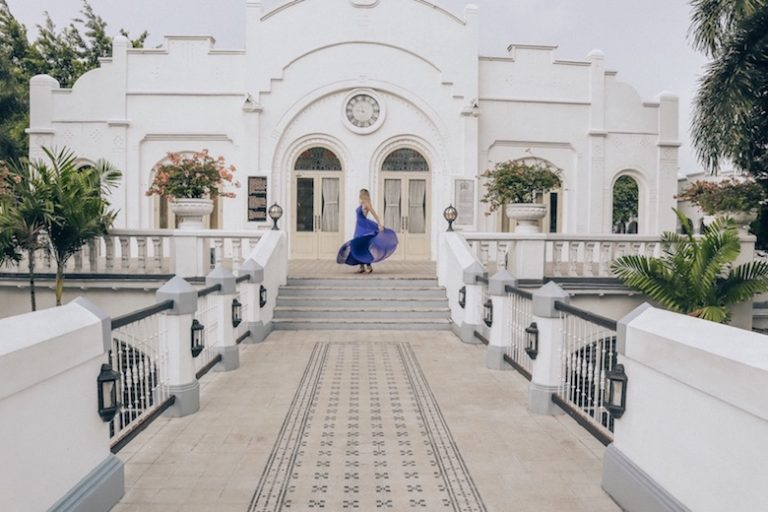 What’s Around The Majapahit

At The Hotel:
Sarkies
Indigo
The Maj
Toko Deli

The Majapahit was charming, nostalgic and an unusually wonderful hotel stay. I can say with all certainty you will never stay anywhere quite like this Javanese hidden gem.
Instead of just another ‘hotel stay’, I felt my time there enlightened and educated me on the unique culture of Java. After all, what is the point of travel if you can’t immerse yourself inside it’s alluring past. 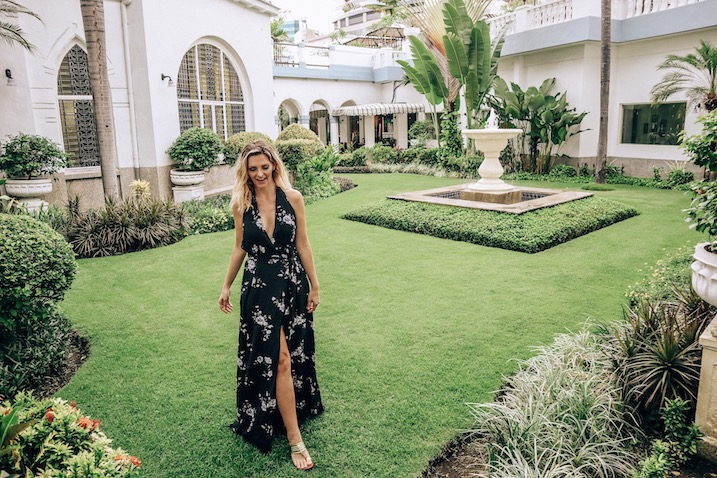 Thank you to the Majapahit Hotel for hosting our stay to make this review possible. However, this review only contains our honest and unbiased opinion. We only agree to recommend brands and properties we actually love. Nobody likes a false review! 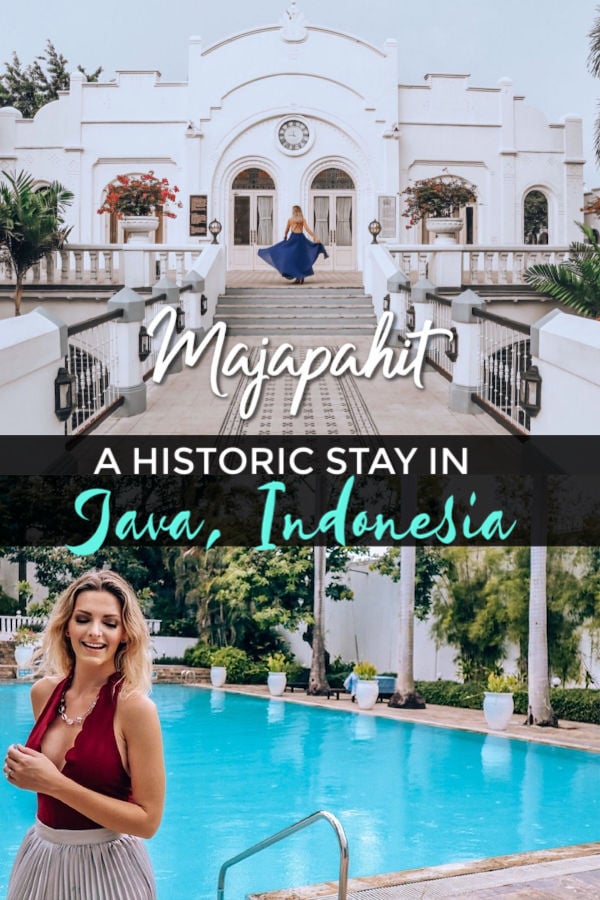 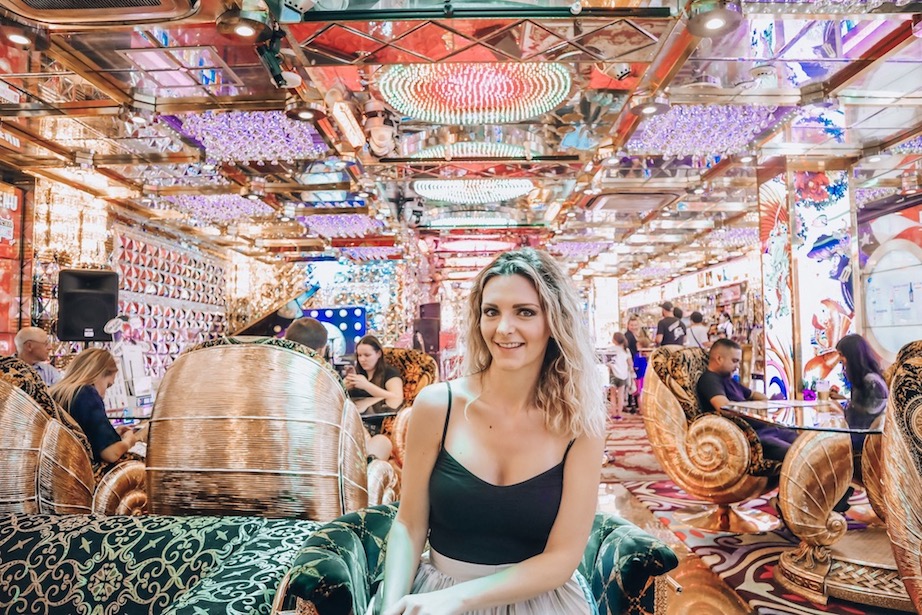 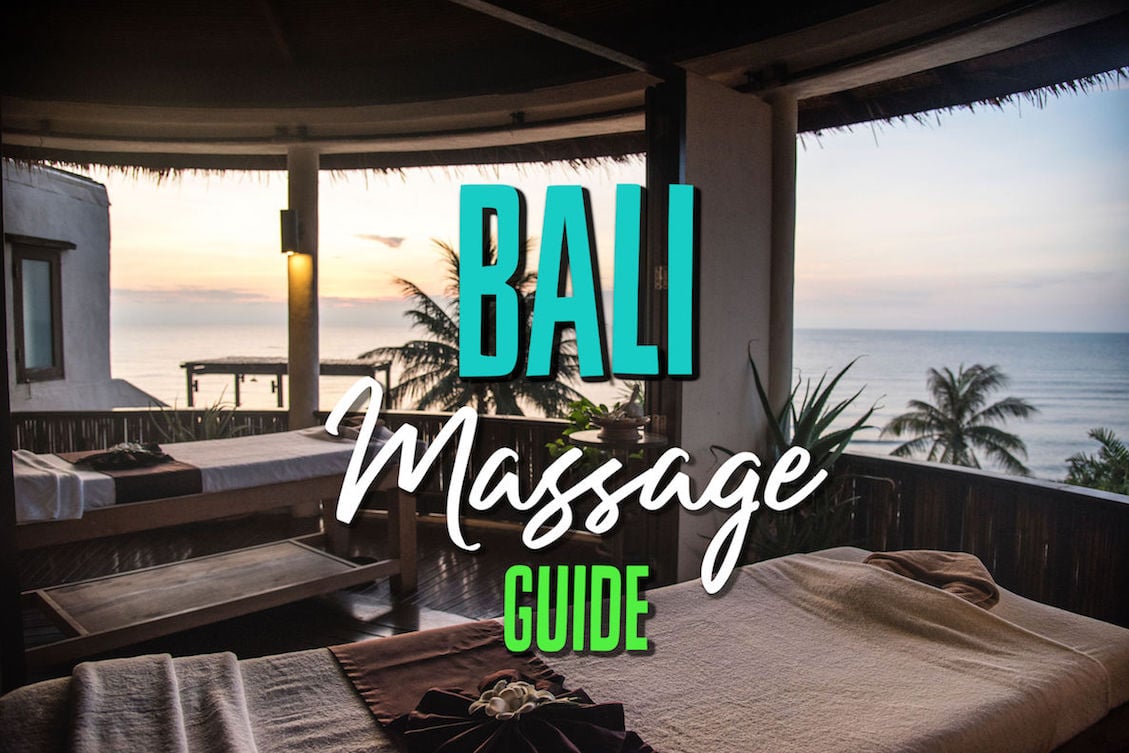 Next
Bali Massage - Everything You Need To Know (With Prices!)
Click here to cancel reply.