U.S. air carrier JetBlue has announced that they will start direct service from New York (JFK) and Boston (BOS) to Paris (CDG) beginning in the summer of 2023. Tickets will go on sale sometime this winter. The official announcement comes three months after JetBlue CEO Robin Hayes hinted that the company will take on another transatlantic route as part of its expansion efforts into Europe.

The New York-based company took its maiden voyage across the Atlantic in April 2021 when it launched its transatlantic service from New York to London. Currently, they operate five daily nonstop flights between the U.S. & U.K.

The Paris route will mark JetBlue’s first presence in continental Europe, and their aim is to offer affordable flights between the U.S. and Europe while introducing a higher level of service that is often lacking from transatlantic budget carriers.

Core offerings include the most generous amount of legroom in coach, fast complimentary Wi-Fi, seat-back entertainment, live TV, and unlimited free snacks. Also available on transatlantic routes, as an upgrade, is the Mint premium experience which offers travelers a fully lie-flat suite that is competitive with other major carriers’ business class offerings.

In a press release earlier this week, JetBlue CEO Robin Hayes said, “The response to our London service is proof that combining great service with low fares works. We can’t wait to bring our reimagined Mint and core offerings to Continental Europe’s most visited city.”

How Will It Compare To Other Options?

In order to compare the value of JetBlue transatlantic flights to others, we pulled sample roundtrip fares for the same week in February 2023 across different carriers in both business and economy classes. Because flights to Paris are not yet on sale, we looked at flights to London and made comparisons between four airlines. What did we find?

There was a $464 price difference between the most and least expensive option for non-stop service from NYC (JFK) to London (LHR) in upgraded service with lie-flat seating.

The price difference was not as sharp with economy fares for the same flights, with a mere $68 difference between the most and least expensive options. JetBlue was tied for the most expensive economy option.

But Price Isn’t Everything!

While ticket prices certainly are a driving force behind why passengers choose a particular airline, it is not the only thing to consider. Many airlines offer services or amenities that might make the extra cost worth it. So how does an actual transatlantic JetBlue flight compare?

For that, we turn to our Managing Editor, Tyler Fox, who recently had first-hand experience with the JFK to LHR JetBlue flight.

Where did you fly from and to last week?

How was your overall experience?

Tyler: Overall, I was really impressed with JetBlue, and I will definitely be flying with them again, especially if flying in economy. I flew economy for this trip, and the seats were noticeably larger than any other U.S. carrier I’ve flown with in the past. I also got really lucky on my first flight and had an empty seat next to me.

JetBlue has unlimited Wi-Fi during its flights, which was great for my trip back from London, but I wasn’t really able to take advantage of it on my other flights. From Grenada to New York and back, there was only about an hour of the flight that was within the service area. From London to New York, I tried to sleep, but on the way back, I took full advantage of the connectivity, which was great for catching up on work.

Additionally, the entertainment on board was great. The touchscreens worked really well, and the selection was really good (everyone knows the kids’ selection has the best movies).

I rarely sleep on flights, but I was able to fall asleep for about 4 hours heading to London, which is a personal record on a plane. I am quite confident this is because I had enough room to stretch my legs out, which has never been the case in the economy for me.

How would you compare this flight with other transatlantic flights you’ve taken on other airlines?

Tyler: I’ve flown with several airlines, specifically to London, in the past. These include WestJet, WOW Air, Virgin Atlantic, and now JetBlue. I would say that JetBlue is definitely my favorite of the bunch, with Virgin Atlantic close behind.

WestJet was technically a better seat, so it’s hard to give a direct comparison. My wife and I got bumped to first class after missing our connection in Toronto and losing out on a whole day of our trip. Still, I got more sleep during my JetBlue flight, though I’ve had a bit more practice sleeping on planes since the WestJet flight!

You live in the Caribbean. Do JetBlue’s new routes make Europe a more attractive destination for you?

Tyler: London is one of my favorite places on earth, and Paris is close behind, so this new route definitely makes me want to visit more! Having a quick connection from Grenada to New York makes the trip pretty painless, and Paris will definitely be on my mind now that I know it is an option with JetBlue.

Where would you like to see JetBlue fly to next?

Tyler: I would love to see JetBlue begin offering flights to Dublin. Ireland was a blast to visit, and I’m looking forward to going again! It’s easy to see the whole country if you rent a car, and I’d like to be able to visit for a month or so to really take everything in. 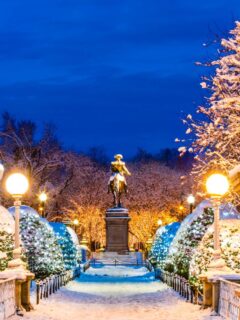 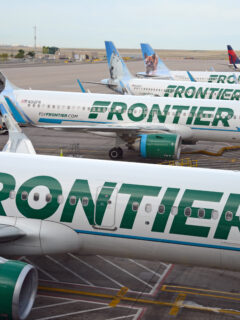 Next
Is $599 Worth It For One Year Of Unlimited Flights On Frontier?
Click here to cancel reply.