The oldest and most luxurious travel brand in the world, Orient Express, has announced its move into the cruise industry with the unveiling of the world’s largest sailing ship. Named the Orient Express Silvenseas, this iconic European brand, which was credited for starting the age of luxury trains and grand hotels 140 years ago, will be bringing its take on luxury to the seas with two ships, expected to set sail in 2026.

Inspired by the French Riviera during its Golden Age, a glitzy and glamorous time when movie stars, writers, artists, and royalty paraded around French hot spots such as Monte-Carlo, Saint-Tropez, and Cannes, this ship is promised to be “a journey beyond your wildest dreams” with “spectacular” interiors.

According to an Orient Express press release, Georges Nagelmacker, the founder of Orient Express, initially took inspiration from transatlantic ships during his travels between Europe and America and went on to create his legendary train, the Orient Express, in 1883 after his experience. Nagelmacker was captivated by the ships’ grandeur, the social scenes in the restaurants, and the atmosphere of the lounges, libraries, and entertainment areas, so it is only fitting that the brand returns to where the dream first began.

“With Orient Express Silenseas, we are beginning a new chapter in our history, taking the experience and excellence of luxury travel and transposing it onto the world’s most beautiful seas,” said Sébastien Bazin, Chairman, and CEO of Accor. He further stated that the sailing yacht will include spaces designed in a way that will remind passengers of the “golden age of mythical cruises” while still providing modern amenities and technologies that passengers are used to.

Orient Express has partnered with well-known hospitality brand Accor and French shipbuilding company Chantiers de l’Atlantique to bring these extraordinary ships to life. Taking the title of the world’s largest sailing ship, it will measure 220 meters (720 feet), the equivalent of two and a half football fields long, while weighing almost 22,300 tonnes (25,000 U.S. tons).

The ship will feature three rigid sails, known as a ‘SolidSail’ design, which are 100 meters (328 feet) high and hoisted on a rig, allowing the sails to give propulsion on weather-relevant days. This design enables the ship to use a hybrid of wind power and engine, with plans to use green hydrogen when approved.

What Will The Orient Express Silenseas Include?

The ship will contain 54 Suites, with one oversized Presidential Suite, which includes a large private terrace. Guests will be able to enjoy two swimming pools — one where they can take morning laps — and then later dine at two restaurants or enjoy a legendary cocktail at the speakeasy bar.

Keeping to its artist and cultural references, the ship will host shows in its Amphitheater-Cabaret, and the ship will tempt musicians with its own private recording studio. If you’re more in the mood for relaxing, you can enjoy spa treatments and meditation sessions.

Where Will The Ship Go?

At this stage, no further information has been released since the ships won’t be setting sail until 2026, but the press release states the ship will include “stopover explorations to discover cultural treasures that allow guests to completely unplug from reality and stop time.”

Judging by the Orient Express’ earlier history, the ships’ cultural references, and the French company ties, ports in Europe are most likely. While you’re waiting, you can check out Club Med’s new all-inclusive sailing yacht or get a taste of Orient Express’ timeless glamor aboard the Venice-Simplon-Orient-Express luxury train, which services famous European cities such as London to Venice or Paris to Verona. In 2024, Accor will also be launching its new service in Paris, where the brand has restored the interiors of 17 original Orient Express carriages from the 1920s to 1930s and turned them into stunning designs. 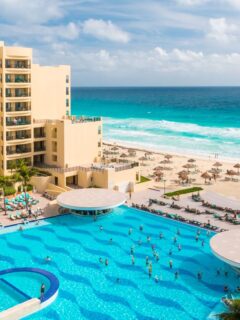 Previous
All Resorts, Beaches, And Public Spaces In Mexico Will Be Smoke-Free 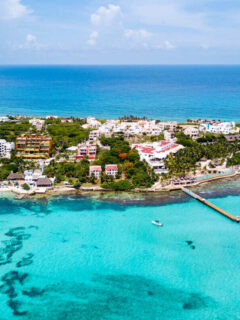 Next
This Tropical Island Near Cancun Is Your Best Bet For No Sargassum Seaweed
Click here to cancel reply.