It’s taken a while, but things are looking up for the cruise industry. Where once cruise lines were forced to keep their fleet docked with little end in sight, many have now begun sailing once again, with cruise vacations a viable option once more.

However, the resumption of cruises across the US hasn’t been without its problems – and many of the problems facing the industry are coming from the cruise capital of the US, Florida. Despite the state’s ban on asking for proof of vaccination, some cruise lines are determined to ask for the vaccination status of their passengers. Here’s a look at which cruise lines are affected.

The state of Florida introduced a ban on businesses asking for proof of vaccination that became effective from July 1st. Championed by Governor Ron DeSantis, he said:

“In Florida, your personal choice regarding vaccinations will be protected and no business or government entity will be able to deny you services based on your decision.”

However, the ban on vaccine passports threw a spanner into the work of the cruise industry’s long-awaited return to action. The resumption of cruises was dependent on them restarting with a high number of vaccinated passengers and staff, as outlined by the CDC. However, under Florida’s new law, asking for the vaccination status of a passenger would leave each cruise line liable to be fined, causing a standoff between the state, the CDC and the cruise industry.

Cruise Lines To Ask For Vaccination Status – What Travelers Should Know

Despite the threat of being fined, some cruise lines intend to go ahead with their plans to ask passengers in Florida for their vaccination status. Two of the largest cruise lines operating in the US, Norwegian and Carnival, will not be budging when it comes to asking for proof of vaccination for passengers – despite facing a penalty of up to $5,000 per violation.

Other cruise lines have already changed their requirements specifically for cruises departing from Florida. Celebrity Cruises dropped the need for Florida passengers to present proof of inoculation, whilst Royal Caribbean will be asking for proof at all ports except for Florida, in order to comply with the law. Royal Caribbean has also announced that unvaccinated passengers who are sailing with them must have their own insurance, and that those who refuse to present evidence of vaccination will be prohibited from accessing many areas onboard the ship.

Addressing the stance taken by the likes of Norwegian and Carnival, a spokesperson for Ron DeSantis said:

“No corporation is above the law. A couple of the biggest cruise lines have revised their policies, and we expect others to follow their example.”

Norwegian’s first sailing from Florida is scheduled for August 15th, by which the situation in the state could have changed and it may become a non-issue for the company. However, Carnival’s first departure from Florida is on July 18th, leaving little time for either the state or the cruise line to back down from their current stance. In just two weeks’ time, the eyes of the cruise industry will be on Carnival to see how their stance is handled, with several other cruise lines with departures slated from Florida later on in the year yet to change their vaccination requirement. 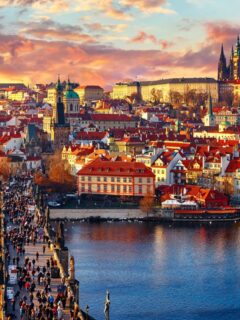 Previous
10 Things To Czech Out On Your Vacation in Prague 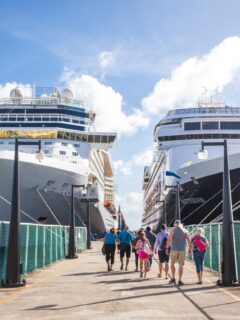 Next
Tips For Booking Your First Cruise
Click here to cancel reply.

The cruise port and the ship are under Federal jurisdiction, like the airports. If airports in Florida can require vaccination proof for international flights to countries that require vaccination, why not cruises? At least, have passengers upload their vaccination cards. That gets around the law.

Lots of respect for DeSantis. I will never cruise on any cruise lines that force customers to prove their personal medical records. If one is vaccinated or not is a private medical matter. I travel in large extended family groups and our entire group will boycott those cruise lines that force personal medical records. It is likely we will sale with Celebrity if they keep the laws of the state of Florida and respect our rights.

@Paul, You're comparing apples to oranges. When you're putting others in unnecessary danger, particularly the elderly that frequent cruise ships and are at the highest risk category, your "personal medical matter" argument becomes moot and irrelevant. There is no way DeSantis will pay and take responsibility for any hospitalization and emergency airlift costs that will certainly occur because of his unscientific policies.

It always amazes me that we Americans have become so individualistic and nearsighted that a sizable portion of the population have become totally incapable of doing any sort of collective action that benefits the greater good.

@Paul, You who are unvaccinated should be restricted from doing anything around other people who have been vaccinated. You should be banned from going to sports games, concerts, cruises, anything that has more than one person you. You who are unvaccinated should be banned from everywhere on earth until you get vaccinated!!!! You have no rights under our constitution to kill other people!!!!! DeSantis can't keep private businesses from requiring vaccines for going into their business. The first time he fines them it will go to court.

sensible and everyone wins

Required vaccination for cruise ships is a total no-brainer. Cruise ships are floating petri dishes and an outbreak from just a single person would be a total nightmare. This has nothing to do with "freedom", it's just common scientific sense.

@john, have you ever cruised the ships are very clean and cleaned all day and night hotel,restaurants,rest rooms (airports rest rooms are the worst) are cleaner than most homes I feel very safe on a ship they are well organized and run well

These Private run businesses should move their ships to ports outside of Florida! Government should not be dictating the policies of private entities! And am I to assume DeSantis is taking ownership of any desths or issues that occur due to Not having protocols and policies in place to protect the cruise lines from liability??