I stumbled across Agatha Kitchen Bar on my very first day in Mazatlán. I was walking down Ave Playa Gaviotas and it couldn’t help but catch my eye. Here was this sleek and modern restaurant that looked more like something you’d find in Vancouver instead of a coastal city in Mexico.

Now, it could have been very easy of me to assume Agatha was just another fancy place. We’ve all seen our fair share, you know the kind – lots of great décor, but little to offer on the menu or in terms of personality. But let me tell you, after experiencing Agatha first hand I can tell you it’s FULL of heart and soul. 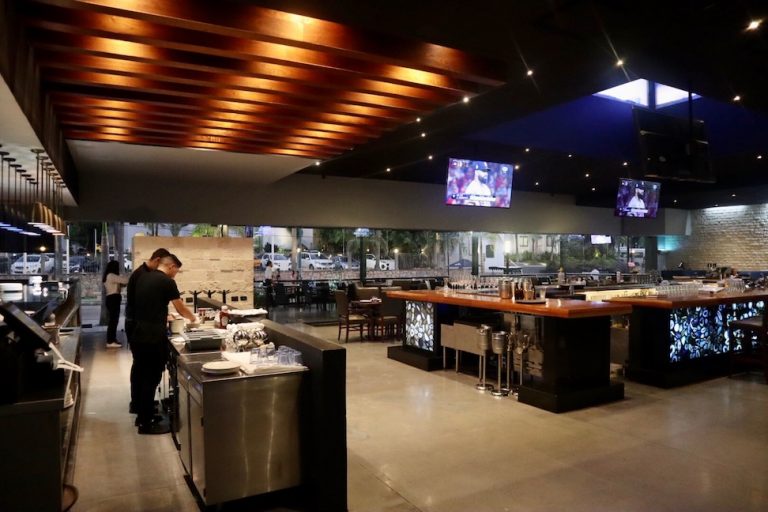 No matter if you are a tourist visiting Mazatlán for a week, or if you’re an expat who is retiring in the city, Agatha is a restaurant you need to experience for yourself.

I met Agatha’s corporate chef, a talented guy named Miguel Angel Alvarez, who prepared a multi-course meal for us to sample.

He has been cooking for 16 years and is passionate about every meal he prepares. I’m always curious about what drives a person to be a chef, so I asked him what he loves most about it. 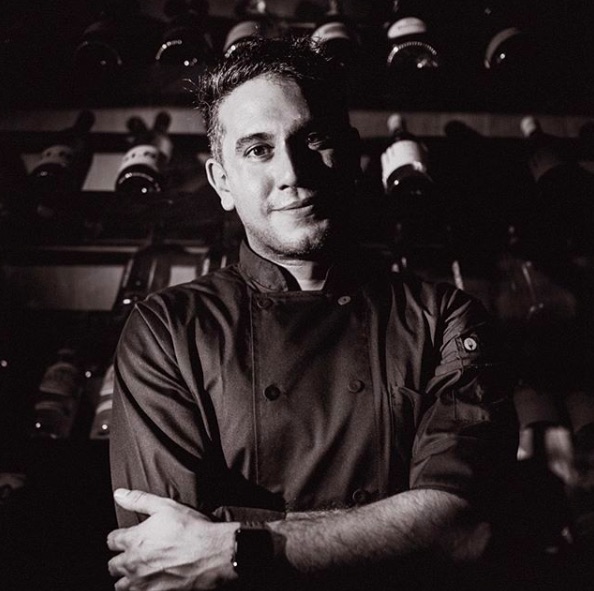 “I love to host people, not only cook for them. People nowadays don’t take enough time to enjoy themselves, so it’s a lot of fun to take care of people and watch them have a whole new experience while dining.”

The Vibe at Agatha

One of the first things I noticed about Agatha was the other people dining. It was a complete mixed bag. There were a few business men with suits on at the bar, a table of tourists with their young kids, a booth with a local family celebrating a birthday, and a group of women having a girls night out. There were people in jeans and sandals and some with platforms and sequin dresses. The crowd was as diverse as you could imagine, and not something I expected to see. 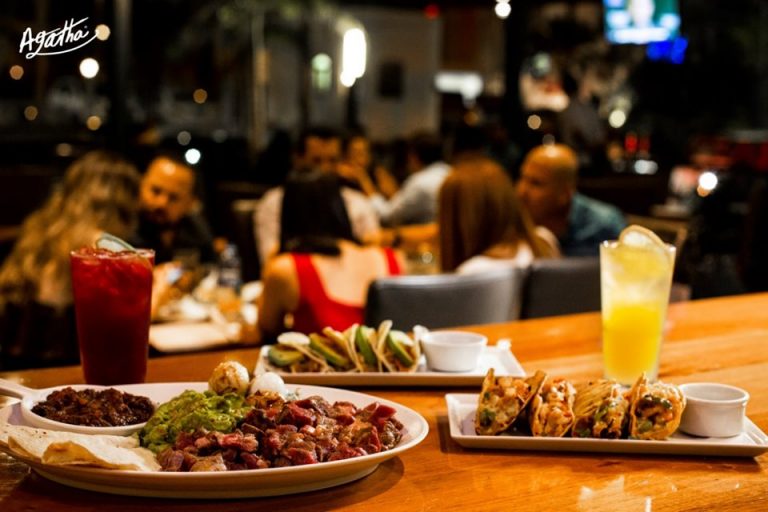 When I asked Miguel about this, he mentioned it was something he wish more people knew about the restaurant:

“What we have created here at Agatha is a place for everyone. We are not a pretentious or snobby establishment, even if the restaurant might look polished and high-end from the outside. We’ve taken great care to ensure that Agatha can be as casual as an everyday hangout, but exceptional enough for special occasions.” 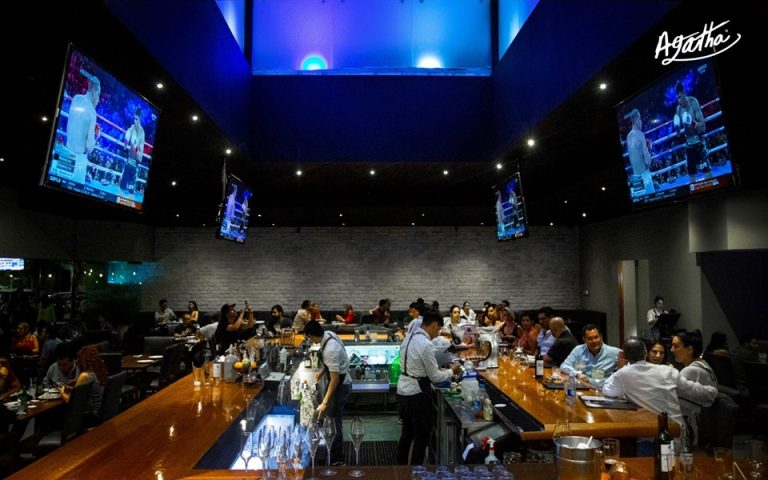 The FOOD at Agatha

What kind of food to expect

Here is what you can expect to eat at Agatha: High quality steaks, delicious sea food, fresh salads, shareable plates and even made-on-demand sushi. It’s not your typical fine dining place. On their menu you’ll find fusions of dishes you’ve never thought of before but will be dying to try.

We took a tour of the kitchen and noticed that not only are their health and safety standards out of this world, but they do things right down to the last detail. Even all their bread is made daily in house.

“We are really proud to enhance the wonderful ingredients our farmers, fisherman, butchers and other producers bring to our door every day. We’re always after the highest quality food possible so our guests can be assured they are only eating the best.”

What impressed me the most was how every dish seemed to have a entire story around it. It made me realize that this wasn’t the kind of place that just threw whatever dish would make the most profit onto the menu.

In fact, while we’re on the subject of money, it’s important to talk about menu prices. You might think that such a posh place would come with sky-high dining costs, but that assumption would be wrong. Agatha has priced themselves extremely fairly, especially when you consider quality, and has made a point to keep it that way. 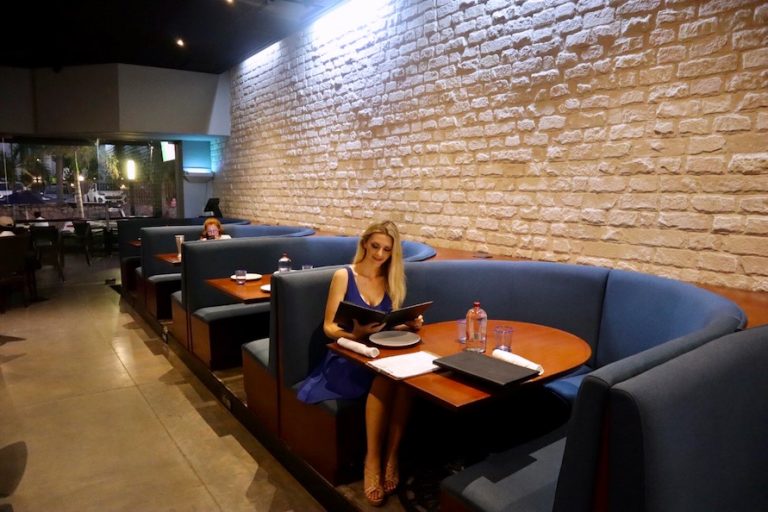 Some of Agatha’s Dishes

Here are some of the starters we personally sampled at Agatha. 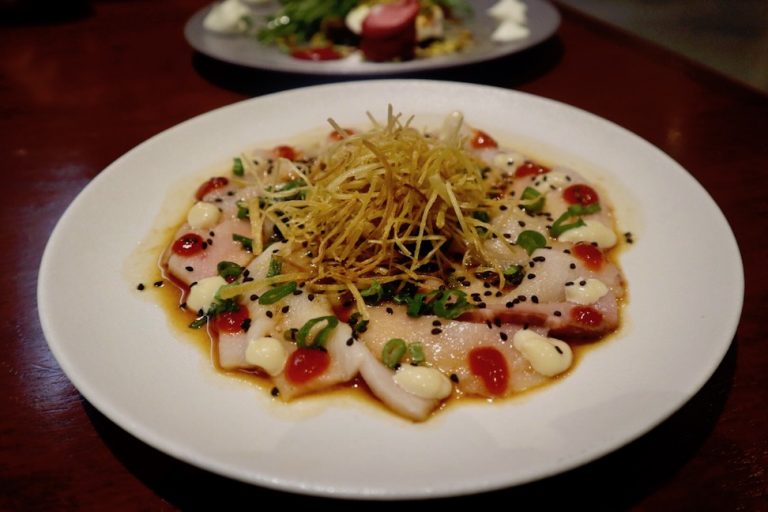 So good! Hamachi is a tuna-like fish and this one was raw, drizzled with a ginger miso serrano sauce and topped with crispy onions. The fish was such good quality and almost had a buttery texture to it. 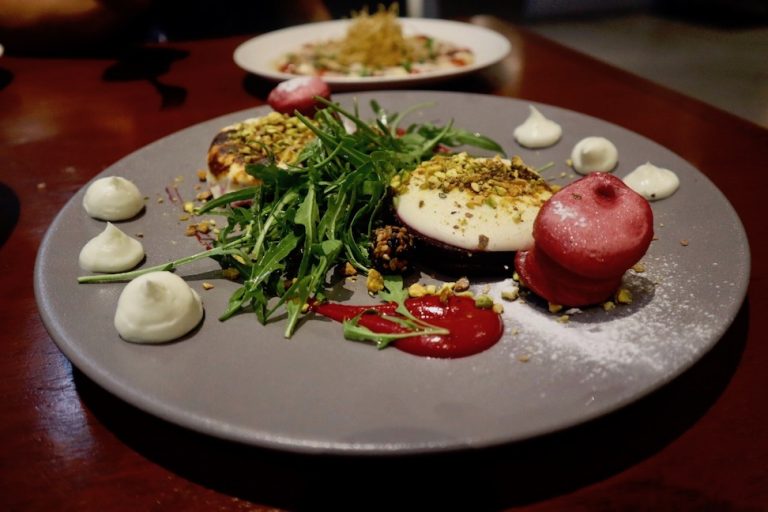 We loved the flavour and texture combos with this dish. They started with thick cooked beets and topped them with marsh-mellow and crumbled pistachio nuts, sitting amongst arugula and goat cheese with seeds. The plate also had dabs of marsh-mellow and sweet sauce on it, making it quite a savoury starter. 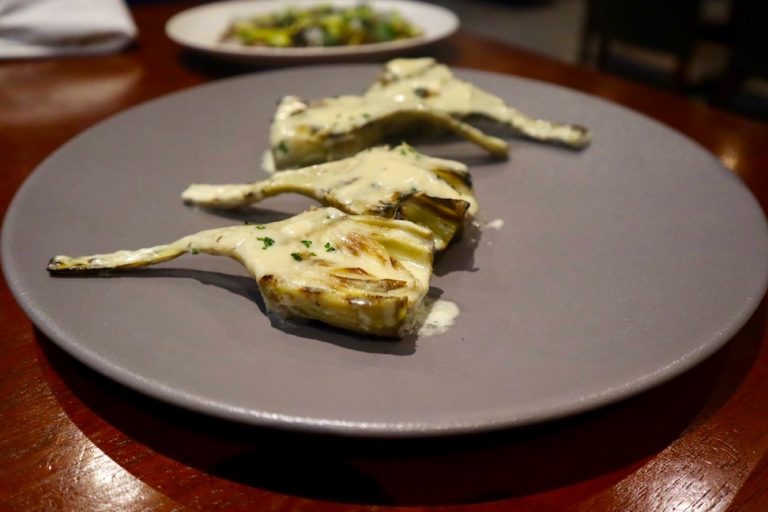 These artichoke hearts aren’t officially on Agatha’s menu, but can be found just next door at their sister Italian restaurant, Vittore. I learned that the restaurant in fact gets its parmesan from Parmigiano-Reggiano, Italy which makes this yummy dish taste even better. 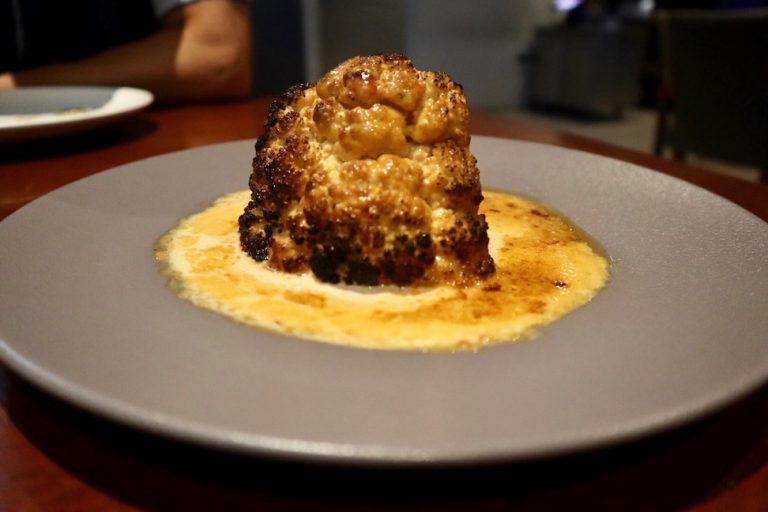 Roasted cauliflower soaked in zarandeado sauce. One of the most surprising dishes we tried. Miguel explained to us how they wanted to take the most humble, common and unassuming vegetable they could find, and make it into a great appetizer. He applied a cooking trick he picked up while studying in India to this vegetable to make the texture and taste just perfect and topped it with a rich and almost cheesy sauce. 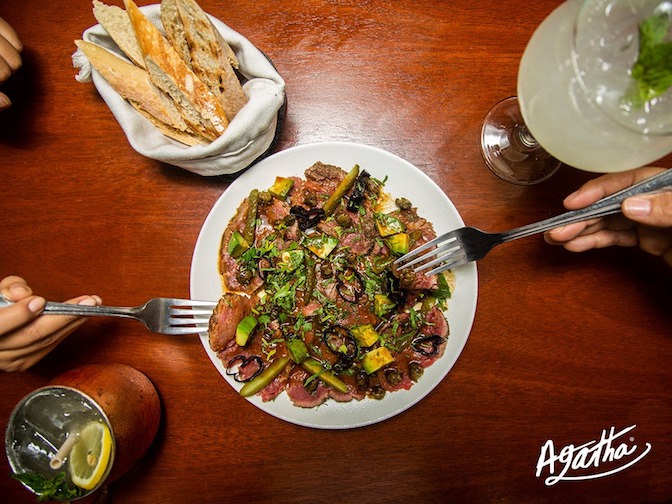 Thinly sliced and lightly seared beef topped with avocado, pickles, capers and pasilla peppers with a beef sauce reduction. My husband says it’s an absolute melt in your mouth burst of flavour.

Miguel wanted us to try out a few dishes on the new winter menu they are creating, of which we were happy to oblige.

“Our goal is to debut our winter menu at the end of November. We will create over 30 new dishes in total, but only about 10 of them will make it to the new menu.”

One of the contenders for the new winter menu is his Beef Wellington. 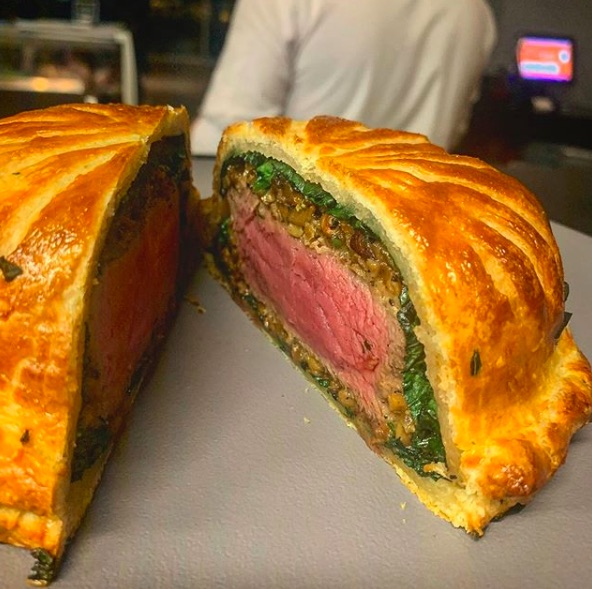 Miguel had put this creation on his Instagram stories and my husband was immediately intrigued, especially when he saw how much work went into it. Light flakey pastry wrapped around mushrooms, herbs, spices, garlic and of course, a tender and juicy tenderloin. My husband said it was one of the best steak experiences he’s ever had.

Another winter menu contenders is this Seared Tuna with an Asian Grapefruit Salad and Wasabi Potato Puree. 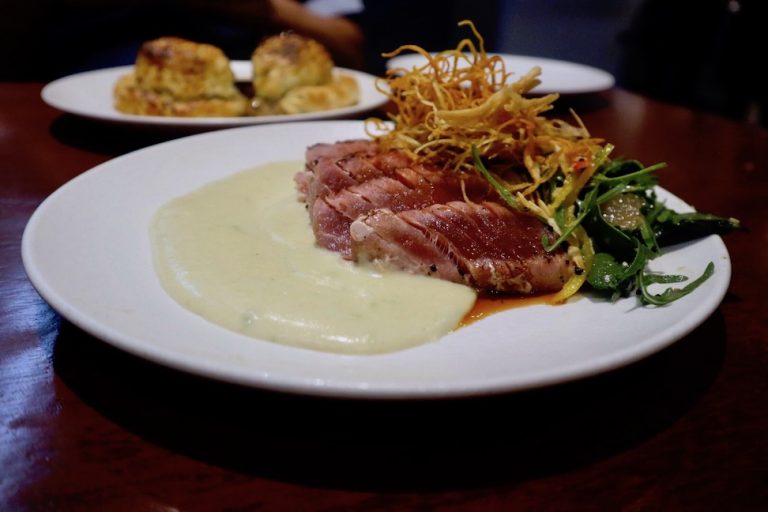 I like to think of myself as a tuna connoisseur of sorts and it’s one food I always look forward to eating. This was definitely not a let down. The salad was cool, light and refreshing with a citrus punch and went perfectly with the incredibly satisfying cuts of tuna. I’m not sure I’ve ever had tuna with potato puree before, but it actually paired wonderfully and gave the dish some weight.

Something else coming to the new winter menu will be more plant-based options.

“We are trying to place more vegetable based dished on the menu in order to promote a healthier, greener lifestyle.”

Miguel mentioned how even though many people still love their meat, the world is quickly waking up to how much damage the industry is taking on our planet. He is happy to introduce more plant-based dished to help turn people on to eating more fresh produce. 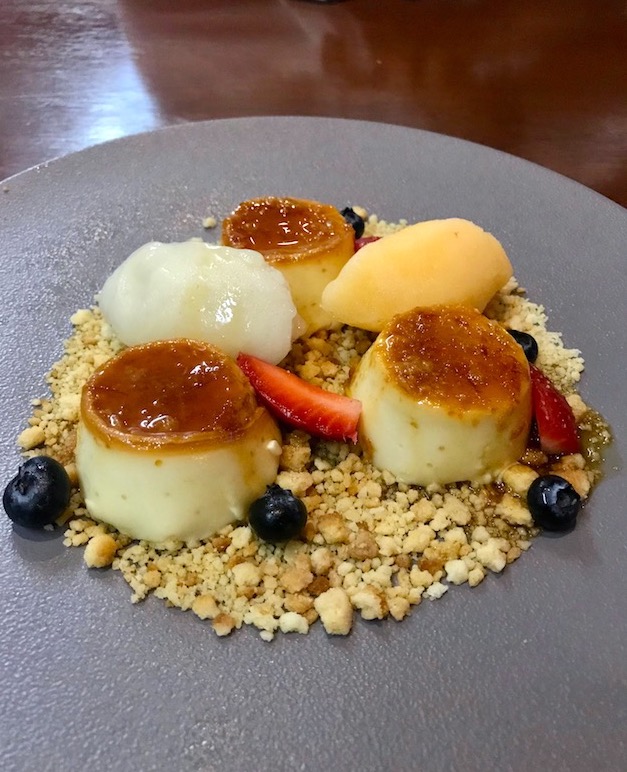 Any flan fans who are reading, cover your eyes…. I have to admit I have always disliked flan. Something about the texture has never convinced me it’s a dessert I want on my plate. I know it’s been a long-standing hit in Mexico for decades, but I still never grew accustomed to it.

When Miguel brought out this flan, at first I was worried, but that was until I tasted it. It’s not your typical tasteless flan. Plus the texture is heavenly! Put together with crumble, fresh fruits and some of the best fruit sorbet I’ve ever had…it was exquisite. 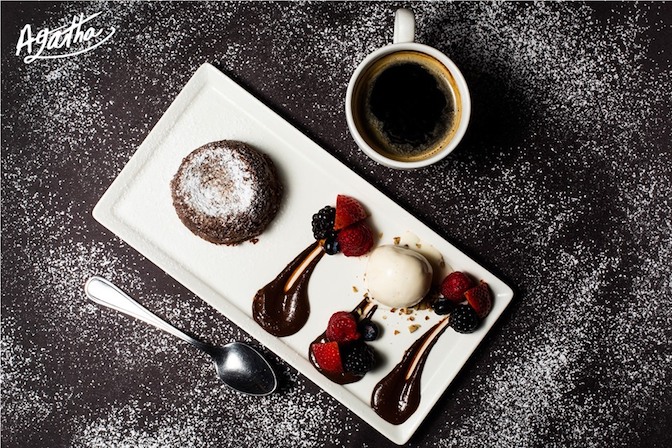 Miguel told us a story about the old kinds of hot cocoa you’d find in Mexico back in the day. It was pretty strong, gritty and cheap, and the flavour wasn’t all that refined. To combat that, people used to add spices like cinnamon, chile and cardamom to the drink to make it more palatable. This chocolate lava cake is a representation of that tradition, with an almost christmas-y taste to it.

The Drinks at Agatha

One of the things you’ll notice while dining at Agatha is the beautiful bar in the centre of the restaurant with skilled bartenders creating sophisticated cocktails. 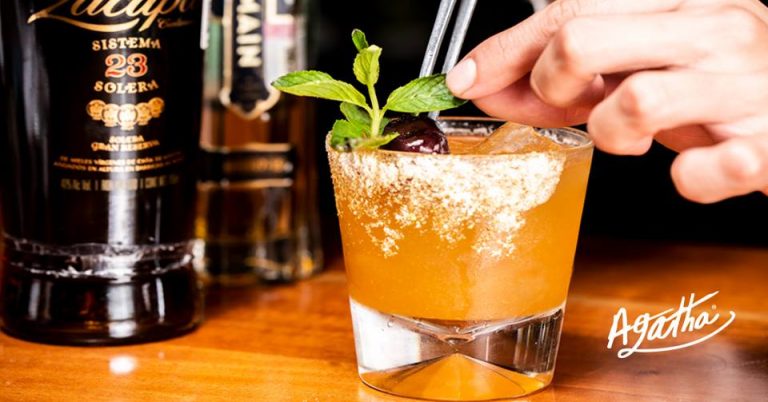 “We pay careful attention to the drinks we serve. Every cocktail you see being made at this bar is made from scratch. We don’t use any powders or simulated flavours, only high-quality ingredients that you can really taste.”

Instead of seeing bartenders using artificial mixes and generic bases to create any old drink, you’ll see them grinding up fine herbs and squeezing fresh fruit to make each cocktail a work of art. 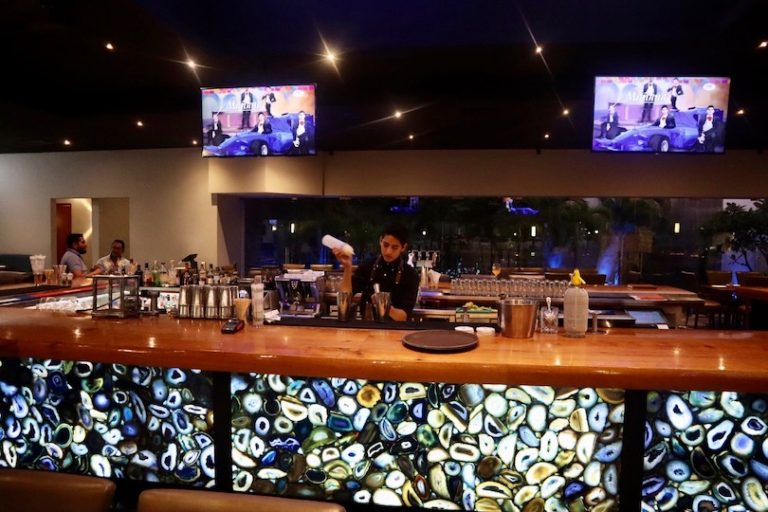 “I’ve been cooking for the last 16 years of my life and each time I’m getting closer to the people I cook for. It has become a way for me to meet new outstanding friends and bring joy to them. This is the reason we pursue to be better every day.”

Personally, I’m in love with Agatha. After seeing first-hand how much effort and care they put into even the tiniest detail, I couldn’t imagine not being a raving fan.
Book a table, you’ll be glad you did!

Here’s where you can find Agatha: 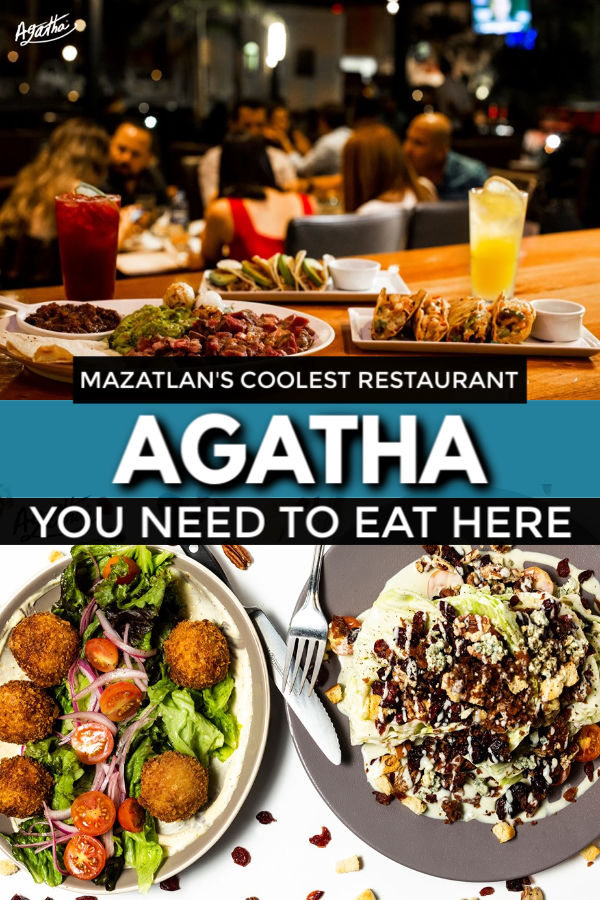 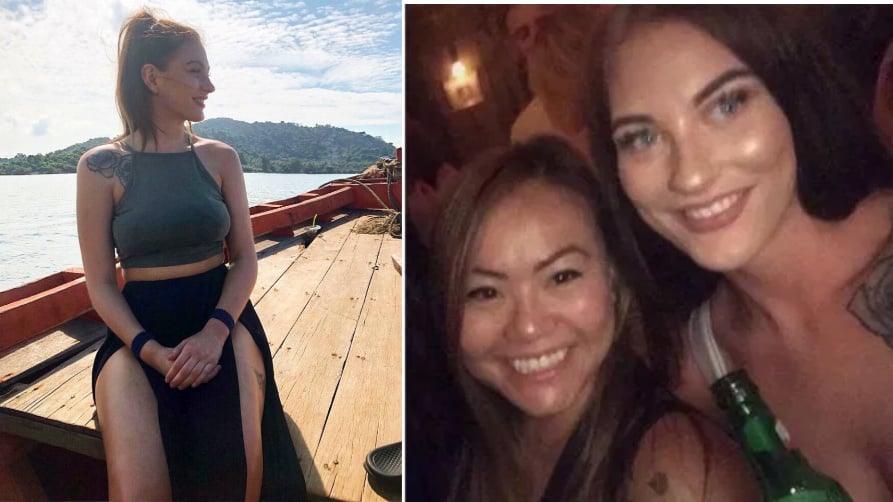 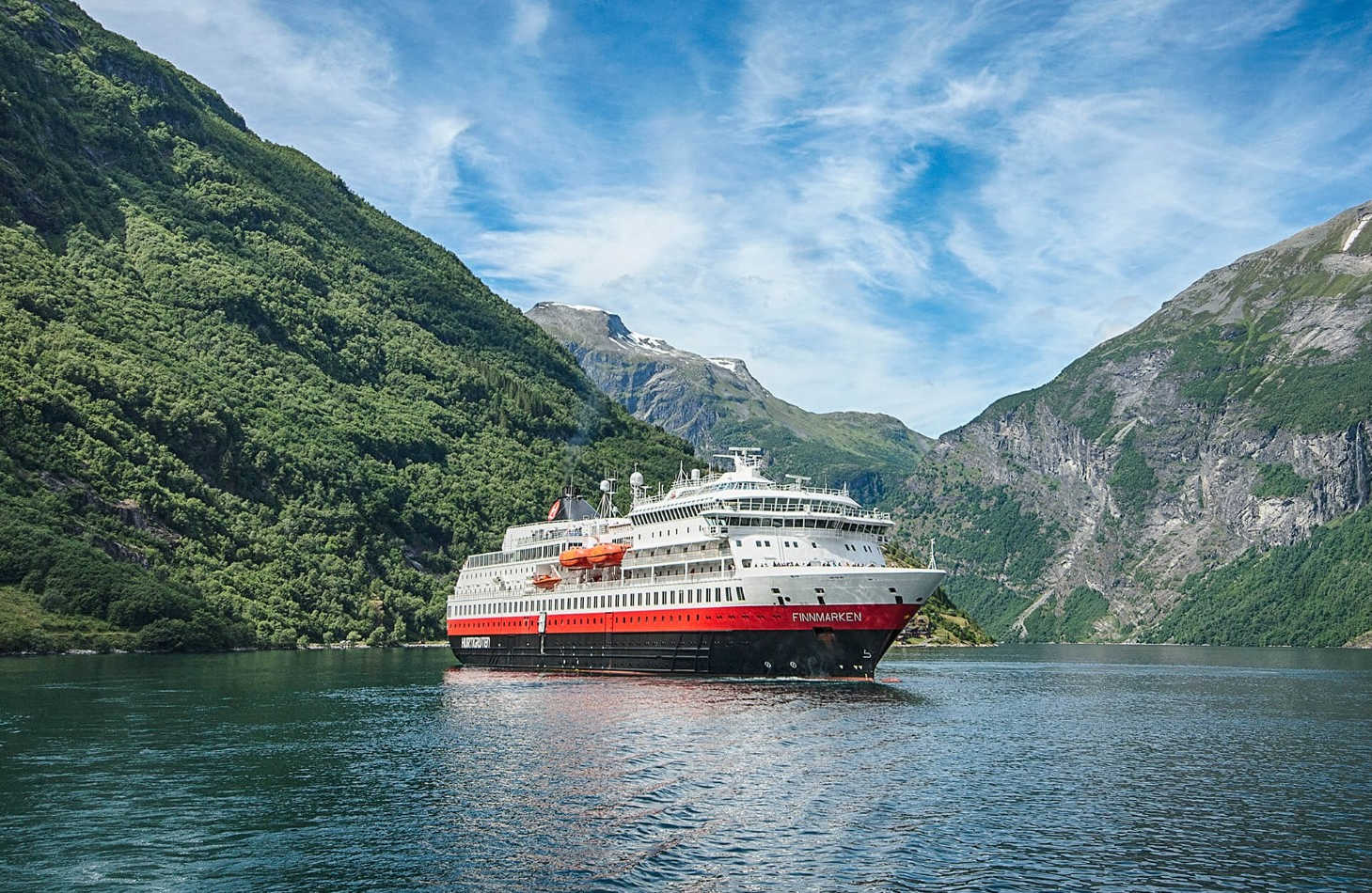 Next
Passenger Falls To Death From Cruise Ship In Norway
Click here to cancel reply.

Is Agatha the trendiest restaurant in Mazatlan? - The Mazatlán Post

[…] CLICK HERE FOR FULL ARTICLE ON TRAVEL OFF PATH […]

We're excited to try this new place when we arrive in Mazatlan!

you're going to love it! :) Enjoy your trip!