Amsterdam No Longer Wants Travelers To Connect Through Its Major Airport

How The Netherlands Shift Might Affect Your Travel Around Europe

The Netherlands is set to transform its air travel sector in the wake of the announcement that Schiphol Airport will be operating under a cap from 2023. The decision is multi-faceted, attempting to tackle both climate change and a shift from the airport’s reputation as a transfer hub.

Schiphol Airport, the Netherlands’ busiest airport and one of the busiest in the world, announced last month that it would begin capping the number of flights flying to and from the hub. The figure released suggested that no more than 440 thousand flights a year would be allowed to leave from Schiphol.

The move is mainly geared at climate change, and the figure corresponds to an approximate twenty percent decrease in the airport’s pre-pandemic figures and is a first for any major airport in the world. The decision was met with celebration from environmental activists but frustration by several airlines and other airports who will now feel pressure to react in a similar manner.

In a direct manner, passengers may be affected by sudden rising costs as the supply decreases, but the decision is also part of a broader change in direction from the Dutch Government.

Schiphol is known for its calculated role as a connection hub airport. Millions of passengers move through the airport every year, attracted by comparatively low costs and high connectivity. Recent figures place it as one of the most connected airports in the world.

Many travelers purposely reroute their travel through Schiphol instead of taking direct flights from their home airports or routing through other major airports that are often more expensive. The UK, in particular, uses the Dutch hub as a cheap alternative to Heathrow, owing to its close proximity to the country. A tourist traveling from a city like Newcastle in the north of England would see far more value in a cheap flight across the channel than dealing with Heathrow.

KLM, the largest airline presence at Schiphol, says this position is now untenable in light of the caps.

It appears the move was a government-wide plan, as country officials have already raised the flight tax for the Netherlands. Schiphol took similar measures and increased taxes for the airlines themselves, putting more pressure on airlines to avoid cheap routes and maximize the type of flight they offer. One member of parliament said of the taxes, “Through these measures, you know that Schiphol will no longer be a cheap island.”

How quickly changes are likely to be seen is hard to tell, but regular travelers who often utilize Schiphol should anticipate a shift in its connectivity, especially for cheaper short-distance flights around Western Europe or for longer-haul flights connecting through the airport.

The airport is also currently operating under a separate, unrelated cap owing to the travel chaos seen across the world. Again, Schiphol’s hub reputation has made the problems more acute, with massive lines, significant delays, and baggage problems forcing the airport’s hand. American Airlines even made the decision to stop operating in Schiphol Airport until the problems lessen.

It joins Heathrow, Gatwick, and Frankfurt in capping summer flights in an attempt to alleviate the pressure on handling staff while they attempt to fill positions vacated during the pandemic. The cap being brought in 2023 will be a larger one.

Although Schiphol is the first major airport to change its policies so drastically for environmental reasons, changes are being seen across the industry. In 2021, France took the bold step of banning short-haul flights if a bus or train was available as an alternative.

Under the rule, any flight where someone could get a bus or train to the destination in two and a half hours or under was no longer allowed. Other countries are mulling similar rules but will most likely wait until the industry has settled into a more typical routine once again.

Routes between 3000km and 5000km are generally viewed as the best for the environment. 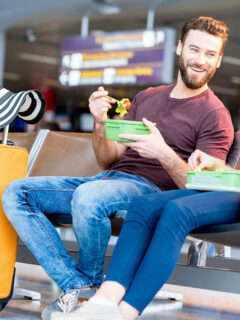 Previous
Food Delivery To Your Gate? Mobile Ordering Is Changing Eating At Airports 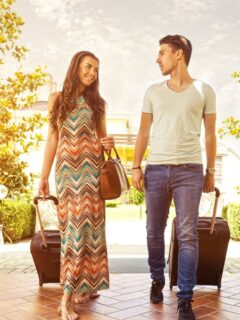 Next
Use This Instagram Trick To Knock Up To 75% Off Your Next Hotel Stay
Click here to cancel reply.

These type of governments and the environmental movement should be charged with genocide for the energy poverty and fertilizer poverty which will create food poverty and famine in other parts of the world. Of course when they create it and it happens they will blame climate change because they don't do science very well.

@John, sure, eliminating transfer flights for the rich western world is exactly the same as genocide.

"Climate change" hahaha. For real. First govs instruct police to beat you up on the street because you didn't get a jab - it's for your protection. Then they tell you to stop flying because it's bad for climate - at the same time they keep flying all over the place. WEF just wants a clear distinction between pleb and ruling class. I guess all those trolls supporting Schiphol restrictions don't hear the noise when a plane with WEF lands or takes off but they can't stand it when working class wants to take a break after working their guts off for the whole year.

@Adam, ah so everybody that is not afraid of WEF is a 'troll'? I'm a dutch citizen living in Amsterdam (so very close to the airport) so I have every right to support the Schiphol restrictions. I can't wait! (Believe me: our government doesn't give a **** about climate change.)

Obviously better for the environment but I'm sad to read this; I've changed flights between Bangkok and the UK several times in the past 18 months and the KLM Business Lounge there is incredible! 😕

@Oohlalad, If it is better for the environment, why are all the climate agenda pushers jetting around the world spreading their fearmongering. Co2 represents 0.04% of our atmosphere. Of this 0.04% 3% is our responsibility. And for those 3% of 0.04% society needs to be put upside down ? Do you know that optimum co2 range for plant life is between 350 and 450 ppm, where at 441 aprox. now, so in ideal range. Who owns private jets, big super yachts and super ? Not us common folk, but we are the ones blamed for climate change. Which by the way is driven by the sun. This has nothing to do with environmentalism.

FINALLY!!! I live close to Schiphol and I'm absolutely fed up with all these noisy planes flying over every 5 minutes just because the richest part in the world wants to travel 'cheap'. Also: the 'pro-farmers' should be very happy with this decision as not only their sector but also the dirty airport(s) now have to limit their emission. Hooray!

@Jack, you're right, moving to Amsterdam ten years ago was a stupid idea. What was I thinking?

@Schmedley, because in the whole country it's impossible to NOT live close to an airport haha. It's a very small country you know ;-). I'm superhappy that Schiphol won't be expanding in the near future, it doesn't make any sense that such a small country has such a big airport (and several smaller ones throughout the country).

@Traveluxx, unfortunately the Netherlands is way too small to avoid hearing and seeing planes, they are really everywhere. You live in a big(ger) country I guess, so yes, then it's easy to just move but the Dutch unfortunately don't have this luxury :-(. (I still live 30 km from Schiphol but in NL everything is closeby)

@Elisa, you could just move instead of sounding so bitter.

@Elisa, if you don't like the noise, why did you choose to live near the airport?

It is really interesting that there is only conspirasits gathering and posting on a TRAVEL website. Always thought there were people with a broader horizon who are able to think at least a little bit out of the box rather than those who are scared by "THEM" (whoever "THEY" are) and think someone is inventing fake pandemics, fake climate changes and fake election results in western democracies. Just wake up. If you feel your freedom is being threatened, how about going to Russia or China and experience, what "freedom" really means. Can't believe all the stupidity.....