CDC Issues Travel Advisory Traveling To These Countries Due To Monkeypox

Are we in the early days of a new global health emergency? After several monkeypox outbreaks were registered across Europe this week, and Belgium going as far as imposing a strict 21-day quarantine for travelers with a confirmed infection, the CDC has now issued a travel warning to a number of destinations due to the emerging threat.

Monkeypox is a disease classed by the World Health Organization as being of ‘global public health importance‘. Although it mostly affects countries in West and Central Africa, it is also present in other parts of the world, and the identification of new clusters in Europe and North America, where it is not yet endemic, is worrying health experts.

Adding weight to the other health warnings issued by countries like the UK, the U.S. Centers for Disease Control and Prevention – CDC has formally recognized monkeypox as a potentially disruptive pathogen, and emitted its own travel alert to a number of destinations in Europe and beyond. According to the CDC, cases have been reported in the following states:

Besides the above, monkeypox has already reached the United States as well, less than a month after the first infection clusters were identified in Europe. For that reason, the CDC has added the affected countries to the Level 2 category, stopping short of slapping a Level 3 travel warning due to monkeypox.

This means that, when traveling to all European countries listed, as well as Australia, Canada and Israel, U.S. citizens should now ‘practice enhanced precautions’ to avoid monkeypox. This is a first for these destinations, as monkeypox had been mostly limited to a number of African nations up until recently.

Out of the CDC-flagged countries, Belgium has been the first to act, enacting a mandatory 21-day quarantine requirement for travelers with a confirmed monkeypox infection. The ECDC, the European equivalent to the CDC, is also monitoring the situation closely, as the case count across Europe exceeds 100 – with a large concentration of those in Spain and Portugal.

Curiously, recent cases have not been linked to travel to Central or West African countries, ‘where monkeypox usually occurs’, such as the Democratic Republic of the Congo and Nigeria. This is a strong indication there is community transmission within Europe and North American continents.

LGBTQ+ Americans Should Exercise Increased Caution When Traveling From Now On

Corroborating other findings by health authorities in foreign countries, the CDC mentions a considerable portion of cases have been reported among men who have sex with men, as sexual interaction with an infected individual increases transmission dramatically. In fact, the first European clusters were likely spread by risky sexual behavior at 2 raves.

Because of early infection trends, gay travelers should exercise increased caution, considering Spain happens to be one of the safest destinations for them, and thus a leader in LGBTQ+ tourism. That said, anyone can be infected, regardless of gender or sexual orientation, as ‘cases were also reported in people live in the same household as an infected person’.

How Is Monkeypox Transmitted And What Does The CDC Now Advises?

All it takes is coming into close contact with a person with an active infection, and particularly visible rashes and scabs caused by the disease. It can also be transmitted via bodily fluids such as pus or blood from open lesions, which are common throughout the course of infection. Scientists have not yet established whether it can be passed on through semen.

While most patients will recover without any long-term complications, monkeypox scabs can leave scars behind once they fall off, and seriously disrupt travel plans. Following in the steps of Belgium, the Dominican Republic, one of the preferred vacation spots for Americans, has also issued a preventive alert due to monkeypox.

As the World Health Organization states, people are most infectious when they have symptoms, much like Covid, and ‘normally for between two and four weeks’. Touching clothing, bedding, towels and contaminated objects such as cutlery and dishes have been equally recognized as precursors to infection.

When visiting Spain, France, Portugal, or any other destination on the list, the CDC now advises travelers to avoid:

Risk To The General Public Remains Low As Of Now

Despite the warnings, the CDC maintains that the ‘risk to the general public is low’. Regardless, travelers are advised to seek immediate medical attention when developing any known monkeypox symptoms. Those can manifest through fever, chills, tiredness and new, syphilis-like lesions on any part of the body.

The latest CDC advice deals a fresh blow to Europe, which only recently started reopening following the Covid crisis. While monkeypox is not a novel virus like Covid, it has the potential to spread quickly and trigger a new era of tightened health protocols for travelers. So far, the World Health Organization has not declared it a global health emergency.

Record Number Of Direct Flights Happening Between The U.S. And Greece This Summer 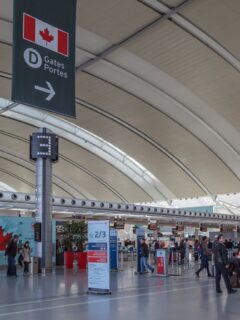 For a disease that’s been around for 60+ years…is there an inoculation such as is available for chickenpox (similar symptoms)?

Here we go again. What's next, monkeypox jab to be able to travel?

You've got to be kidding. A new pandemic to save the planet from overpopulation?

The CDC is not a credible authority. Do not take them seriously.

Meanwhile in ALL these countries: life as usual with exactly zero point zero attention to whatever this latest thing is. All these "health" authorities have lost their minds ca February 2020 and apparently not gained it back. Get over your paranoia, it's embarrassing.