Flight Alert Sites – The Best Ones To Find The Cheapest Airfare

“Kashlee, how on Earth did you find a flight to the Caribbean for $188!?”
…my inbox goes crazy asking for tips whenever I post about cheap airfare deals I find. Like the time I found business class seats on Qatar for the price of economy. Or when I found a round-trip premium economy flight to Mexico for the same price as a one-way ticket.

I am a skilled hunter in the art of cheap flights and I like the thrill of the chase. But if you’re new to finding flight discounts and don’t know where to look, I’ve got you covered. Here are all my tips for finding the best deals on flights.

There are THREE ways I find these cheap flights: 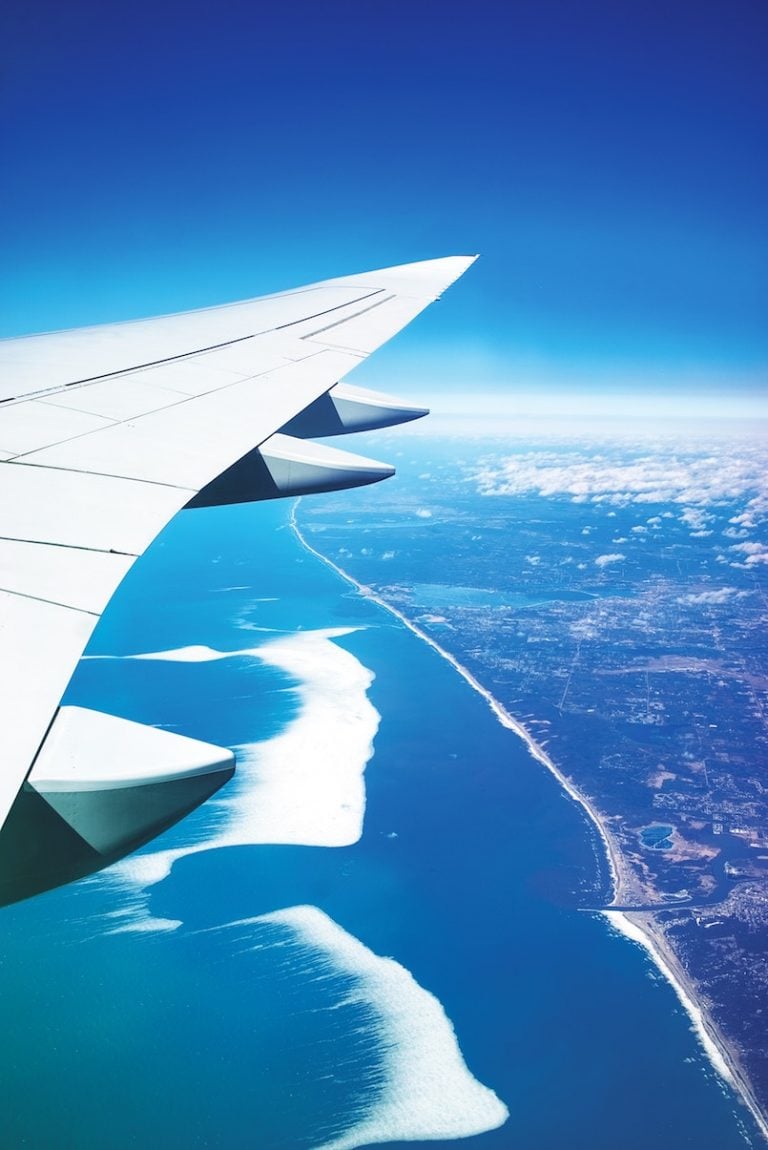 Quite frankly, most people don’t like doing #1 or #2, and I don’t blame them. Even though I love the hunt, constantly searching on Google Flights and blogs can be really time consuming and doesn’t even guarantee you will find a deal at all.

This is why I always recommend that people use #3 – Flight Alert Sites. They are the easiest way to have cheap, custom deals delivered right to your inbox, without having to spend any time looking. Think about it… while you are hunched over your desk at work you might get a ‘ding’ into your inbox with a sweet $400 round trip deal to a tropical island. You didn’t have to do any of the work, but you’ll have the chance to reap all the rewards.

This blog isn’t going to focus on which sites allow you to SEARCH for cheap flights, but instead which ones send flight alert deals to YOU.
There are many flight sites and apps that claim to have the best ‘airfare alerts’, but some take more work than others. Also, EVERY flight alert site works well for airports in the United States, but not all of them work well in Canada or Europe.

Here are some of the best and easiest flight alert sites to use:

In my opinion, Airfare Watchdog is the BEST flight alert site out there.

First off, it’s Canadian friendly (as many flight alert sites only work well in major US cities) and they even have deals in smaller city airports. Like my hometown airport for example, Kelowna, BC.

Airfare Watchdog allows you to get flight alerts in three different ways:

This flight alert option is great if you already know where you are going and it’s set in stone. You put in the departure airport and the arrival destination and it will keep an eye on all flights for you while you sleep.

If a cheaper than normal deal is found for that specific route, it will email it right into your inbox.

Departures FROM a certain airport to ‘ANYWHERE’

This makes it really easy for the dreamers. You simply put in your hometown airport and set up an alert for ‘anywhere’. Whenever there is a super cheap flight depaturing from your airport, it will email you. Those flights could be to a nearby city, down to Mexico, or maybe even South East Asia. There is no rhyme or reason for when low airfare happens. This way you can play flight roulette! Just see what cheap deals come to you and book your destination based on that.
(Highly recommended!)

Arrivals TO a certain airport from anywhere

This is a VERY cool option that I have only seen with this site. It allows you to search for cheap flights coming INTO a certain airport. This is great if you have family or friends that want to visit you, but can never find a cheap enough flight to do it.

We are moving to Mazatlan in Mexico this winter for 6 months, so I already have my ‘arrival alert’ set up. This way if I get an email about a really low-cost flight coming in from Halifax, I can tell my parents to jump on it and come see me!

Scott’s Cheap Flights is another great flight alert site, but it does have some limitations.

It doesn’t work for smaller city airports (like my hometown airport in Kelowna), but has Vancouver and Calgary, which are the next major airports to me. I have my alerts set up for those closest major airports, as I can usually get to them easily for the right flight deal.

Scott’s Cheap Flights isn’t as robust as Airfare Watchdog for settings, but it still sends out some rock-solid deals. This flight alert site is best for setting your departure airport and letting it email you flights to unknown and random destinations.

In the last week I’ve been emailed about cheap flights leaving from Calgary and Vancouver to: Lima, Mexico City, Sao Paulo, Brazil, Costa Rica, etc all for prices between $250-$550.

They say it lists 5x’s more flight deals than the free account does. It also publishes mistake fares (when an airline accidentally prices a flight too low) and deals that are during peak holiday times. If you are going to be taking a LOT of flights on your own dime, the premium might be a good idea. However, if you are just looking for a one-off cheap flight, stick with the free account.

Okay, Hopper isn’t a flight alert site, but instead an app.

If you are looking for an easy way to find cheap flights on your mobile, this would be your best bet. The only catch with Hopper is – you need to have a specific destination in mind, as you cannot set your flight alerts for ‘anywhere’.

When you put in your departure airport and destination airport, a colorful grid will pop up, visually showing you which days are the cheapest to fly. Once you select dates, you can set up price alerts that will watch the fare for you and send you a notification if/when it gets cheaper. 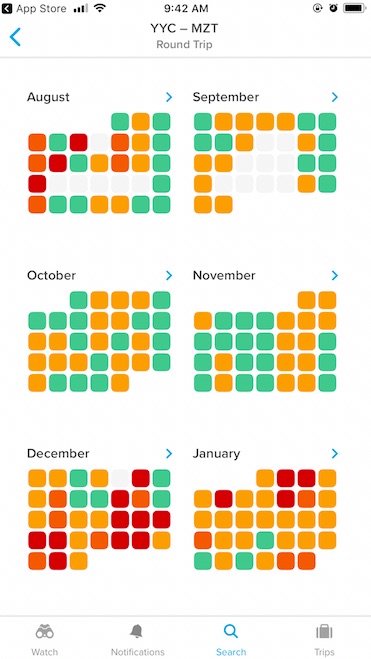 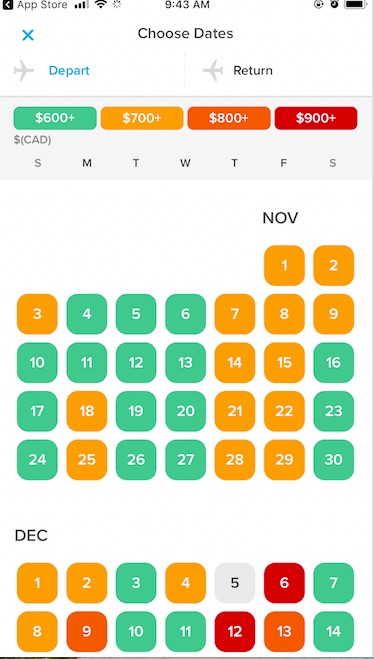 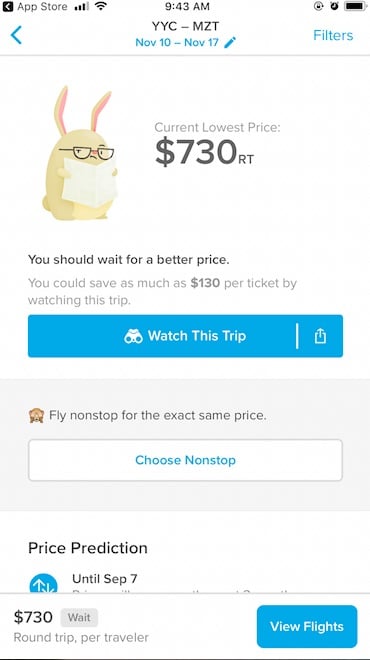 The two things I like about the Hopper app are:

Sky Scanner is one of my favorite sites to search for random flights on, but they now have a ‘Get Price Alerts’ button for when you want to watch a specific flight.

Traditionally I would use Sky Scanner for the freedom of their ‘Everywhere’ button. I would go to the site, put in my departure airport and select ‘everywhere’ for the destination. I like how I don’t even have to commit to a date during the search either. I can put in the entire month of July for example, or even the entire year. Since I can be a super flexible flyer, I like being able to search a wide variety of dates and destinations at the same time, as it gives me more ideas on where to go next!

If I do find a cheap flight I want to watch, that is when I can set up a price alert right on the site. It will email me and let me know if that flight goes up in price or down in price.

Thrifty Traveler is a great flight alert site for travelers living in the US, but not so much Canada. (That is unless you are living close to the border and can cross over to take advantage of cheaper flights!) It’s not as custom as some sites but is easy to use and has an affordable premium option.

Here’s how it works:

You sign up to their daily newsletter on their website and each day they email you flight deals from across the US. Most of these deals are domestic, with the occasional international flight.

If you want access to great international deals and ‘mistake fares’, you can sign up to their Premium membership, which is a reasonable fee at only $40 per year. 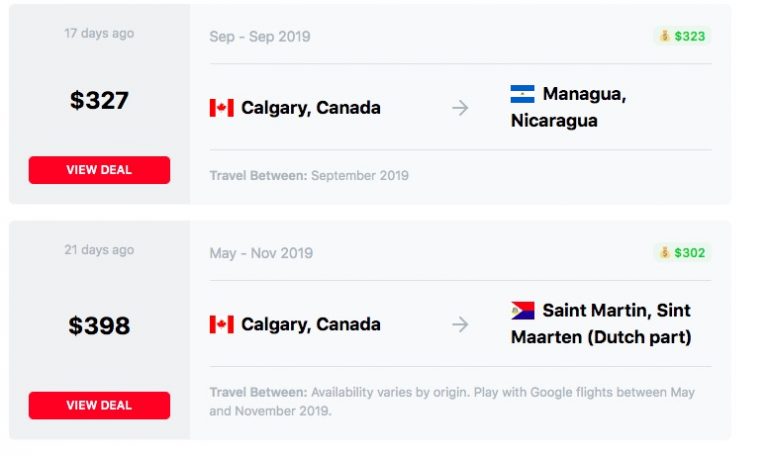 CheapFlightAlerts.Net is very much like the ones I’ve already talked about above, but has a few other small features I wanted to mention.

When you get to the site and put in your depature airport, it will auto-load all of the sweet deals leaving from that airport in the next year. You can also toggle to JUST show only those fares that are business class, which is a great feature. Many of the other flight alert sites are only dealing with economy flights, so I like the ability to check what business class deals might be available.

Deal flight alert emails can also be set up to ONLY email out business class deals.

Like Scott’s Cheap Flights, I cannot choose my hometown of Kelowna, BC (too small), but it does work for larger Canadian airports like Calgary and Vancouver.
Cheap Flight Alerts also has a Premium Membership for $49 a year which sends out deals sooner and more frequently.

Deal Ray is a premium membership site ONLY. It does not have a free membership with an option to add on premium features like Scott’s Flight Deals. Personally, I have not tried their membership, as they primarily focus on flight deals originating from US airports.

They offer the first month free and after that it’s $9.99 per month to be able to receive their low-cost flight alerts.

Since they don’t offer any kind of peek into their flight deals without signing up for premium, I’m not sure how good their deals are.

Have any Flight Alert Sites you want to add?

If you found a new flight alert site we would love to hear about it! Let us know in the comments below. ↓

→Carry On Luggage Guide- Sizes, rules and best ones to buy
→How to avoid catching a COLD on a plane
→Qatar business class review 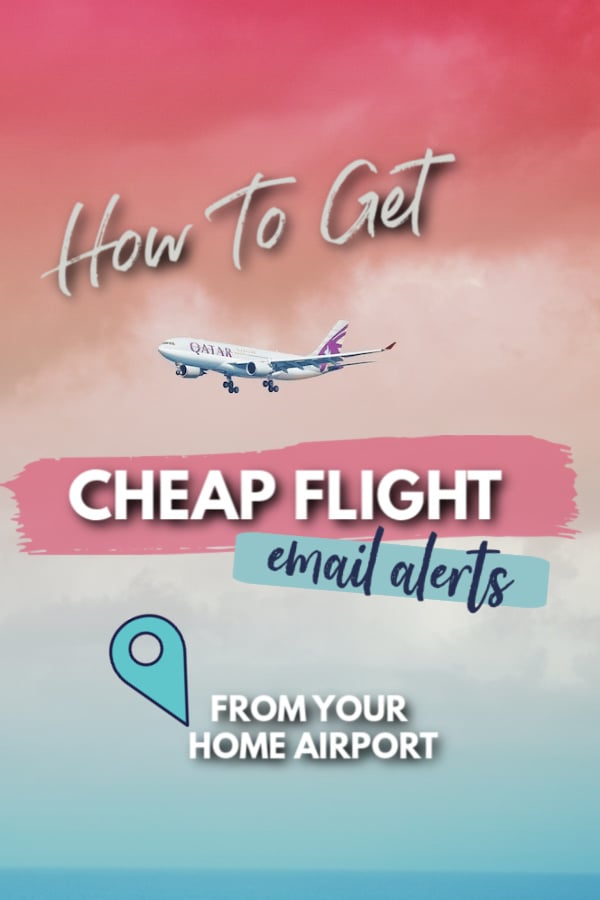 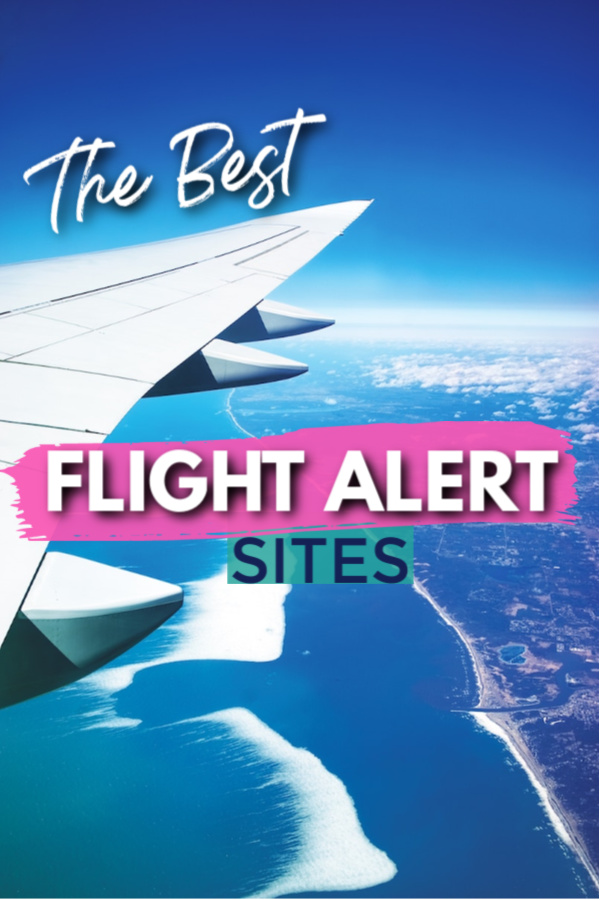 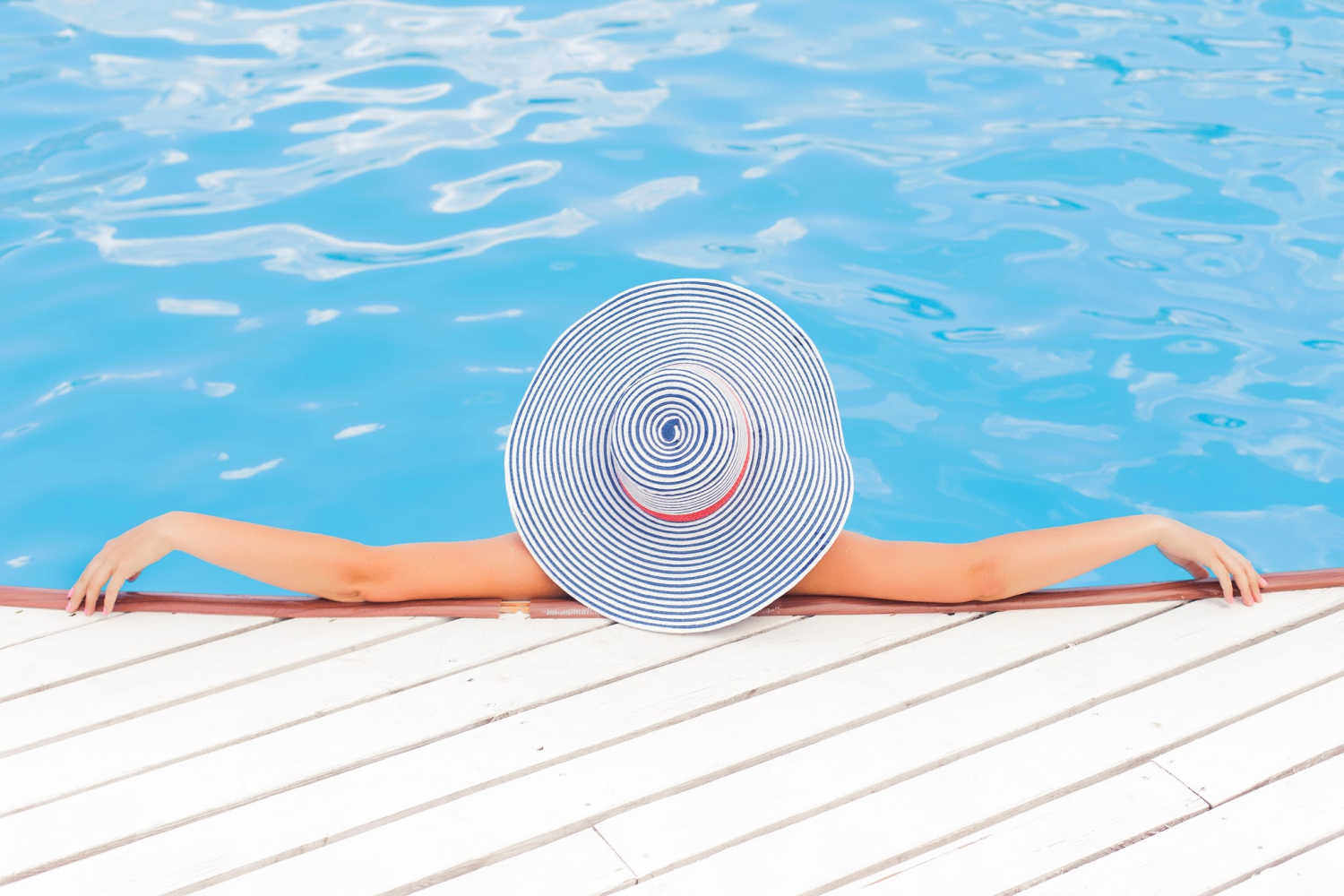 Previous
The BEST Summer Job in the World! Get Paid $10K to Lounge by EPIC Pools 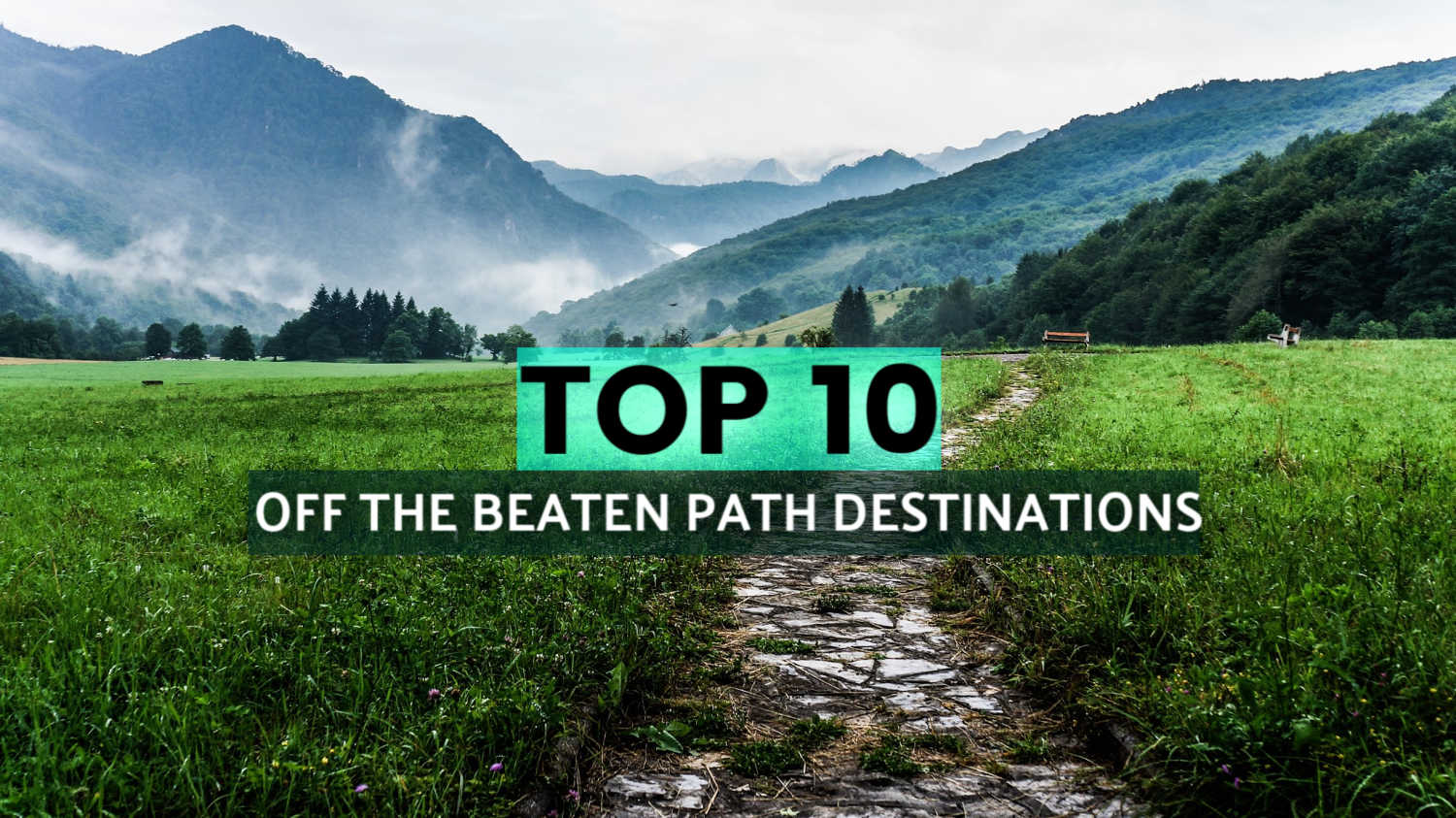 Next
Top 10 OFF THE BEATEN PATH Destinations
Click here to cancel reply.