Now that Greece has fully reopened and normality has been reinstated, a surging crowd is taking over the narrow streets of Mykonos and Santorini once again. Fearing a re-enactment of 2019’s disruptive overtourism, authorities are reminding tourists it is not all about ‘sun and beach’, and asking them to explore other off-path destinations instead.

A leading Mediterranean hub this year, the nation owes its enduring success to a host of UNESCO-listed monuments and islands surrounded by the clearest of waters. On top of its unrivaled beauty, both natural and man-made, it has scrapped restrictions in a timely manner and recently began offering long-term visas for eligible American expats.

All of these factors have contributed to a stellar resurgence following Covid, but this unprecedented demand comes with a cost Greece is not willing to pay:

Tourists are back to flocking the alleyways of Plaka, in Central Athens, while Instagrammers wait in line for hours on end for Oia’s signature blue dome church, sunset shot. While this is certainly great news for an economy heavily reliant on American dollars, the Government has been adopting a more sustainable approach to tourism this time.

After experiencing record lows in 2020 and 2021 as a result of the pan-European health protocols, tourism in the Hellenic World is predicted to grow this year, with 19.12 million visitors being recorded between January and August already – far below the historical high of 2019, which peaked at 31.3 million, but an indication Greece is returning to form.

In spite of the strong rebound, the local Government has expressed concerns mass tourism could have a serious impact not only on the environment itself, but livelihoods. Earlier this year, the capital of Athens joined 22 other European cities in urging the European Commission to limit short-term stays in order to combat gentrification.

The locals’ disliking of the phenomenon has been addressed by Dimitris Fragakis, Secretary-General of the GNTO (Greek National Tourism Organization). Like the Italians and the French, where strict regulations aimed at curbing overtourism were put in place, Athens is fighting to retain the traditionalism of its Old Town and central district.

Greece Wants You To Go Off Path

According to Mr. Fragakis, the entity’s new sustainable goals are not restricted only to the environment or preserving natural resources: they want people to be ‘close to tourism’, not against it. He then proceeds to reassure Athenians, and all of the Republic, they do not face the same fate as Venice, Paris, and the like:

‘There are some bad cases here in Europe of countries facing overtourism, where the locals are kicked out from their houses or their neighborhoods. We don’t want that‘, he acknowledged. Contrary to the aforementioned Venice, however, their solution is not a complex ticketing system, much less a controversial daily cap for visitors.

As Fragakis states, it is ‘not just sun and beach, and it’s not only the islands.‘ Drawing attention to the mainland, the Secretary-General pointed out that beaches in the North are equally beautiful and that ‘nobody knows these kinds of places’. In his view, it is still possible to have a quality vacation without flying to the saturated, influencer-colonized Cyclades.

Occupying the southernmost tip of the Balkan Peninsula and home to a maritime zone with 227 islands, the Greek Republic has a lot more to offer than simply whitewashed houses and Mykonos’ seasonal beach party soundtracked by Paris Hilton’s pre-recorded DJ sets. In fact, the GNTO is hoping more guests will see the beauty of it in winter as well.

The bliss of summer may be behind us, but some of our favorite places to explore right now in the continental part of Greece, where the weather is still pleasant enough for late-night strolls, some lemon gelato by the seaside and alfresco dining, and the atmosphere is so relaxed you’ll feel like the only foreigner in town are:

Only an hour and a half away from Thessaloniki, in the heart of the Eastern Thrace/Macedonian region, Kavala is characterized by a medieval fortress perched on a hilltop with sweeping views over the Mediterranean, a charming old town (Panagia) and golden sand beaches. The city itself serves as the main gateway to Thasos, one of the most recluse islands.

A small town in the hinterland of Thessaly, Kalabaka is best known for providing access to the six Meteora monasteries, translated into English as ‘suspended mid-air’. These Orthodox enclaves, built between the 12th and 14th centuries, sit atop unique, free-standing geological formations, providing near-total isolation from the outside world.

Famous for its panoramic views and numerous artisan shops, where traditional black wine, handmade rugs, and woodcut religious icons are displayed, Arachova is a quaint mountain town conveniently located on the road to Delphi, the seat of the Oracle in Ancient Times. Needless to say, the whole area feels more ‘Greek’ than any Aegean tourist trap.

Perhaps Greece’s most overlooked city, Ioannina is bordered by lush green areas and the mesmerizing Lake Pamvotis, the most scenic in the Epirus region. Due to its close proximity to the Albanian border, it also has a distinct pan-Balkan architecture compared to other parts of Greece, housing its best-preserved buildings from the Ottoman period.

To discover other jaw-dropping attractions on the mainland that are not nearly as popular as the islands, yet just as beautiful, click here. 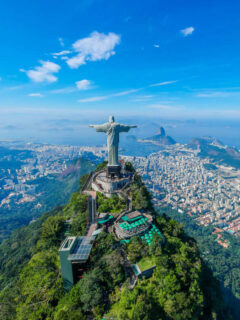 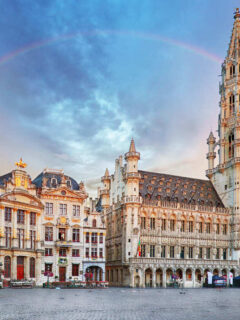