The world’s largest passenger aircraft is making a comeback in the post-covid world, as travel demand is skyrocketing.

It wasn’t too long ago when the A380 was officially retired by Airbus and airlines pulled the aircraft from its networks as the pandemic wreaked havoc on the travel industry.

Over the past months, travel demand has been at an all-time high, in some instances surpassing pre-covid levels. Even with airlines selling their seats at record prices, consumers are not slowing down.

The overwhelmingly consistent travel demand is unlikely to dissipate anytime soon airline executives believe. This has resulted in some airlines bringing back the glorified superjumbo A380.

With its large seating capacity, airlines can maximize the high demand for seats, while operating a moderate network with limited staffing caused by the lingering effects of Covid.

An unlike return of the A380, but not for everyone.

No one could have expected that there ever would be travel demand high enough to justify bringing back the A380. After all, many airlines decided to retire the jumbo jet early in 2020 when the pandemic first hit.

The enormous aircraft was simply not economically viable for any airline operation. Despite the popularity amongst travelers from all over the world, its 4 large engines created astronomical fuel consumption.

Then the pandemic hit and travel was virtually brought to a complete stop. The A380s were pulled from service almost immediately.

During the pandemic, Qantas Airways gave their 12 A380’s a long break in a remote desert in California when the pandemic first hit. They thought they wouldn’t need the long-haul aircraft for another 3 years.

Etihad Airways wasn’t hopeful for a return of their superjumbo fleet at all.

No airline was as relentless as Air France when it came to the decision to remove the A380 from service. Air France announced during the middle of the pandemic that they would retire their A380 fleet entirely – 2 years earlier than anticipated.

Air France ended up being the first airline to retire the A380.

Lufthansa who operated 14 A380s before the beginning of the pandemic also announced that they would retire the jumbo jet completely. Their 14 aircraft were stored in Spain for over 2 years before most of them ended up being sold off.

Travel has gotten a lot worse since the beginning of the pandemic.

For the past months, the travel industry has been in shambles – the aviation industry in particular. Plagued with severe staffing shortages that affect every part of the airline’s day-to-day operation.

From ground crews, and cabin crews that sanitize aircraft, flight attendants, and of course, pilots.

The heart of every airline operation is its staff. Without it, there simply is no efficient way to operate thousands of daily flights. The majority only running minutes behind each other.

The results of low staffing? A slew of cancellations across the airline industry. Thousands of flights have already been canceled. It is so bad for airlines, that they are canceling flights preemptively weeks and months in advance because they know they cannot meet the crushing demand.

There simply aren’t enough airline employees to meet the needs of passengers who are more often than not, traveling for the first time since the beginning of the pandemic.

The Airbus A380 might bring some relief to the aviation industry.

There is a reason some airlines are bringing back the A380, and it’s to meet demand while being resourceful with its very limited amount of pilots. This particular aircraft is incredibly expensive to operate and airlines wouldn’t subject themselves to such expenses if they didn’t think it would work in their favor.

The Airbus A380 could help the airlines with a major problem, and that is a pilot shortage.

Airlines could operate the A380 on major international long-haul routes like London to Miami, Sydney to London, Dubai to New York, or Dubai to Paris with fewer overall flights, while still offering an adequate amount of seats in order to meet passenger demand.

Less overall flights mean the limited amount of pilots an airline does have can be spread out better across their network.

The A380 returns to the skies.

Just this month alone there are nearly 4,000 scheduled flights using the A380. That number will be even higher in January 2023 with an expected number of 6,000.

Airlines that are currently operating the A380:

It is clear that airlines are putting their faith back into a piece of aviation engineering that was thought to be extinct. 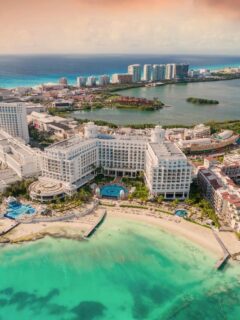 Previous
Cancun Is Bringing Back The Use Of Face Masks Indoors 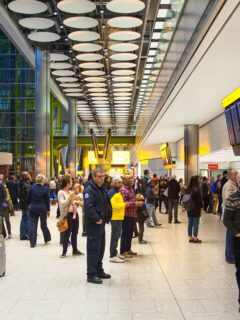