Norwegian Cruise Line is ramping up the pace of its cruising comeback by announcing a series of new cruises departing from Miami that will sail through the Caribbean. Even during the height of the pandemic, when cruises were forbidden to sail from the US, there was hardly a week that the cruise industry wasn’t in the news. Thankfully, as the cruise industry kicks through the gears and into normality, there are more and more positive stories about cruises adding to their itineraries that are making headlines for all the right reasons.

With cruises from Norwegian Cruise Line departing this month and throughout December, cruise enthusiasts are covered if they are in search of some winter sun. Here’s everything you need to know about the cruise line’s new options, and how they have been getting on with resuming their operations once more as a whole.

Almost two years into the pandemic, it’s fair to say that the cruise industry has had more than its fair share of ups and downs. The decision by the CDC to suspend all cruises in the US during the spring of 2020 was a hammer blow to cruise lines and cruise enthusiasts alike. After several long months without cruises, the industry staged a comeback this summer and, before long, test cruises turned into fully-fledged cruises for passengers to book and enjoy as normal.

Norwegian Cruise Line is amongst the growing list of cruise lines that have been steadily upping their cruise numbers in recent weeks, taking advantage of the growing appetite for cruises and travel in general. On November 20th, the cruise line saw its Breakaway-Plus class cruise ship Norwegian Joy leave Miami, headed for the Caribbean on a seven day trip. Norwegian Joy became the ninth Norwegian ship to depart since cruises restarted.

From Miami, Norwegian Joy will set sail for Roatán, Costa Maya, Cozumel and the cruise line’s private island in Belize, Harvest Caye. This particular route will be offered through to April 23rd. Speaking about his cruise line’s ninth route, Norwegian’s CEO and President Harry Sommer said:

“With the launch of our ninth ship, we now have more than two-thirds of our berths in operation, and we couldn’t be more excited.”

It doesn’t look like Norwegian plans at stopping there either. Once it wraps up its sailings in Alaska, Norwegian Encore too will begin sailing out of Miami from December 12th. The ship will be heading out on seven day tours of destinations including Puerto Plata in the Dominican Republic, St. Thomas in the US Virgin Islands, Tortola in the British Virgin Islands and Great Stirrup Cay in the Bahamas. These options will be available until April 10th.

Norwegian Getaway will also be providing tours from Miami from December 22nd, taking in the wonders of the Caribbean on a series of five and nine day sailings until February 11th, whilst Norwegian Pearl will make its post cruise-suspension debut from Miami, with an 11-day option starting from December 23rd. That will bring the number of Norwegian cruise ships in the cruise capital up to four.

Norwegian had previously announced a large sale – called The Greatest Deal – which offered a range of discounts, freebies and add-ons for customers, as well as their largest ever itinerary. The cruise line looks well placed to put the misery of the pandemic-induced suspension behind them as they head into the new year on a high.

All Carnival Cruise Ships Will Resume Service In 2022 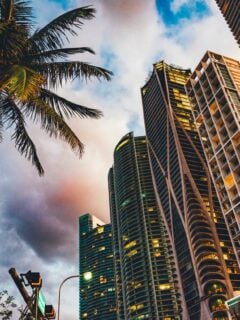 Next
Top 7 Hidden Gems in Palm Beach to Discover this Winter
Click here to cancel reply.