Time Out has just released the results of their fifth annual ranking of the world’s coolest neighborhoods after surveying over 20,000 people worldwide. These unique top spots are the best in the world for culture, food, fun, and community. The ranking includes buzzing communities from all over the world, with neighborhoods in Mexico, Europe, Southeast Asia, the U.S., and Canada taking the top five spots.

Part of the Plateau-Mont-Royal borough, Mile End is known for its culture and music and has produced many artists, including Arcade Fire. Mile End houses some of the snazziest joints to relax and chill and has a funky, artsy feel. The main thoroughfare, Rue Bernard, is a treasure trove of indie record shops and thrift stores dotted with hip cafés serving top-notch coffee. Several of the city’s best restaurants are in Mile End, and lively nightlife centers around the local brewpubs and music venues.

Ridgewood is found in the New York City borough of Queens and is a neighbor to ultra-hip Bushwick in Brooklyn. This diverse neighborhood has a laid-back, local vibe often described as “old-school meets trendy” and is constantly evolving. Ridgewood is home to small, independent stores, landmark restaurants and bars, and trendy new eateries. Ridgewood is often overlooked by visitors to NYC but is well worth the time.

Located on the Siem Riep River’s east bank, just 15 minutes from Angkor Wat, Wat Bo Village has recently transformed into one of Asia’s coolest destinations. Recent investments in the city have only improved its unique character and offerings. The neighborhood is popular with expats and is home to the area’s best food and nightlife. Alfresco cafés dot the shady tree-lined streets, and buzzing bars, relaxed noodle joints, and food trucks line Wat Bo Road.

Once the toughest district, Cais do Sodré has undergone a complete transformation and is now applauded as the fashionable heart of Lisbon’s vibrant nightlife. This district centers around the modish Pink Street, home to bars and discos that are finally bouncing back after a rough few years during the pandemic. The neighborhood is also a favorite of budding new chefs and unique small businesses, and is now home to some of Portugal’s most talked about new restaurants.

Guadalajara’s Colonial Americana neighborhood has officially been crowned the coolest neighborhood in the world. This edgy, underground neighborhood is less known to tourists, but with Guadalajara being known locally as Mexico’s capital of culture, it is not surprising that it would be home to the world’s top neighborhood.

Colonial Americana is a colorful mix of old and new – home to neoclassical mansions full of budding artists and dive bars serving up locally-made tequilas. Chapultepec Avenue (locally known as Chapu) is the beating heart of the action, with plenty of live musicians and local artists and fantastic street food. Colonia Americana has earned the top spot, effortlessly showcasing its unique and evolving culture and offering a diverse selection of sights for both locals and visitors. 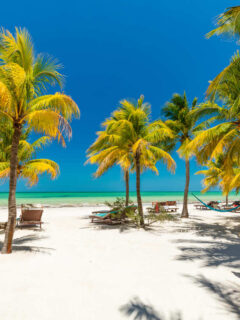 Fitzroy in Melbourne should be here also amazing neighbourhood