Kicking airplane seats, crying babies, bad odors, or not using headphones are just some of the pet peeves for passengers when traveling by air, but what about for flight attendants? Since most flight attendants need to respond with a smile, you might be unfamiliar with the things that actually have their teeth clenching.

In a recent survey poll from the Twitter account, “Two Guys On A Plane,” flight attendants asked their followers what their biggest pet peeves on airplanes were. Check out the top 7 most annoying things that flight attendants come across below.

Assuming Flight Attendants Know How You Take Your Coffee Or Tea

It seems one of the most popular grievances from flight attendants is asking for tea and coffee and not giving any further instructions until after they’ve finished serving you. A flight attendant broke down what a typical scenario would look like to Travel Off Path:

Flight attendant: How do you take it? Black?

Passenger: Could I have cream and sugar?

Some passengers take the cue that boarding and service time is the best moment to stretch their legs, but flight attendants plead this is not the time. Flight attendants find it most frustrating when they are trying to offer their food and beverage service and customers decide to use that time to go to the lavatory or stretch in the aisles. As a flight attendant wrote: “Those carts weigh 300 to 400 pounds fully loaded for us to maneuver them back and forth to let you in and out.”

Not Being Organized Before Boarding

“Getting organized during boarding (and not in the lounge beforehand), blocking the aisle, creating a traffic jam and slowing down the boarding,” a flight attendant told Travel Off Path. People holding up the aisle and repacking their bag in the aisle ultimately pushes the time for fight attendants to secure the plane before taking off, which enables the plane to leave the gate on time.

Taking Up Room In Overhead Bins

As one flight attendant commented on the post: “Putting backpacks in overhead bins when we specifically tell people it’s a shared space and intended for the big suitcases and to put them under the seat in front of them.” Flight attendants discussed how this takes up time to rearrange bags, especially for bags that won’t even fit, which ultimately impacts the time to get the plane off the ground.

“They stare at you while you struggle with their bag or just ignore you! I’ve had to pull the bag out, and ask, “ Who is the owner of this bag?” I will say this 4 times. I then say, “ Unfortunately, I have to check this bag,” commented a flight attendant.

As one flight attendant told Travel Off Path, “my biggest pet peeve would be when passengers bring their super heavy, bursting at the seams, carry-on luggage and ask us to lift it into the bins for them. If they can’t lift it, then there’s a high chance neither can I.”

Asking For Non-Urgent Things Before Takeoff

“Safety is our main concern, so when boarding is happening, we’re usually juggling 10 safety-related things at once without passengers realizing.” The attendant suggested to hold off asking for non-urgent items such as water or a pillow until after the flight has taken off, so they can focus on their safety protocols first.

“Having “savoir vivre,” a “please” and “thank you” would never go wrong. As a general rule, to be treated nicely, one needs to behave nicely,” said a flight attendant. Keeping headphones in and not taking them out when attendants are trying to communicate with you was also a big no-no.

It seems that flight attendants aren’t the only people bothered by this, because passengers also ranked others being rude to the airport staff as the number three most annoying pet peeve in a survey conducted by Upgraded Points. 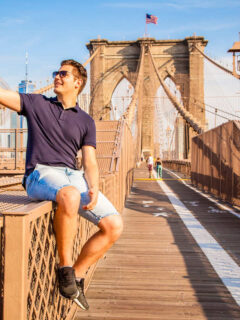 Next
These Are The Top 4 Trendiest Destinations In The U.S. For 2023
Click here to cancel reply.

Why do people keep kicking seats???? (and its not children which is understandable)