While it may not be the most popular airport serving New York City, the lesser-known hub of Stewart International still looks set to resume international flights to popular destinations in Europe this summer, waking up from a two-year long hibernation.

Although communities heavily reliant on Stewart will surely welcome the news, unexperienced travelers may want to be more careful booking flights from Europe to New York and vice-versa in the months to come. After all, this airport in particular is located roughly 60 miles outside the city itself.

Stewart International Back In The Game After Months Of Inactivity

When planning trips to and from New York City airports, most passengers immediately think of either John F. Kennedy International (JFK), Newark Liberty or LaGuardia. With all three of those being some of the busiest on the East Coast, and also boasting some of the best flight connections, it is no wonder they rarely ever consider other hubs to fly into.

However, those are only three out of seven major ones serving a wider New York, in a list that includes both airports that are centrally located, like JFK and Newark, and others lying outside the city’s boundaries. Unfortunately for those expecting to reach New York quicker, Stewart falls under the latter category.

While the airport does offer direct links to the Big Apple, including shuttles, its disadvantageous location in Orange County tends to spook passengers working with tighter schedules. And, with Covid still around and pre-departure testing windows getting shorter by the minute, “time” is a pressing concern for travelers.

Competition from more popular hubs does not seem to faze local operators, with the airport expected to re-launch international services for the first time since the pandemic started. Icelandic low-cost airline Play has been the first to jump on board, adding New York Stewart as its newest U.S. destination, following the inauguration of the Baltimore/Washington and Boston routes.

Now, New Yorkers flying from Stewart will benefit from direct flights to Iceland, further strengthening the close links between the Nordic nation and the U.S. The new service has been acknowledged for putting Stewart International on the map once again, as the airport practically came to a standstill over the course of the pandemic.

As stated by Alex Minton, manager of Air Service Development and Industry Relations at the Port Authority of New York & New Jersey, it is “really special” and “unique” that transatlantic flights will be re-starting from Stewart, which before 2020 was even deemed a “rising star” for Port Authority.

During its best period so far, Stewart was named an “anchor tenant” for Norwegian Airlines, with twice-daily flights to Dublin, as well as daily services to Shannon, two of the main entry points in Ireland. On top of that, Norwegian also linked Stewart and Edinburgh, Scotland, making the New York departure point a reliable bridge for Americans visiting the British Isles.

Stewart’s surprising rise was conversely followed by a drastic slump: Norwegian pulled out in late 2019 as losses became pronounced, and low demand resulting from Covid also led Delta and JetBlue to shut down operations. As a result, all international services were axed.

But those who believed Minton would give up that easily were mistaken: he has reportedly worked with major booking platforms such as Expedia and Orbitz to secure Stewart’s ranking as a NYC airport in search bars. Now, if travelers select Iceland as a destination, it will likely rank closer to the top and show the lowest fare.

This is obviously good news for those who were eagerly waiting to jet off from SWF (Stewart) again. Besides the direct daily service to Iceland, Play will also operate one-stop connections to seven cities in Europe, with Paris and Berlin among those listed.

On the other hand, travelers who are not aware Stewart International is located miles outside downtown New York, and who fail to do their research prior to booking, could be negatively affected by Minton’s move. Foreseeing mixed reactions, Play has cited more taxi availability, shorter processing times at border control, and smoother baggage claim as reasons why travelers should book tickets through Stewart.

According to Play, even though the airport is approximately a 75-minute drive away from Times Square. In other words, nearly the same time it takes for passengers to clear customs and retrieve luggage from either JFK or Newark, which are much busier.

As Stewart argues its way back into relevance, more airlines seem interested in competing in the area and boosting connectivity for both local and inbound international travelers, with Norse Atlantic Airways also expected to launch new flights from Oslo, Norway to Stewart.

When booking trips abroad, regardless of the destination or departure point, we would like to remind our readers to always purchase travel insurance that covers Covid-related costs in advance. Now more than ever, and especially with the spread of more transmissible variants, the risk of testing positive while abroad is higher, and no travel can be considered risk-free.

In summary, make sure you tick all the following boxes when flying abroad from, or transiting New York City airports: 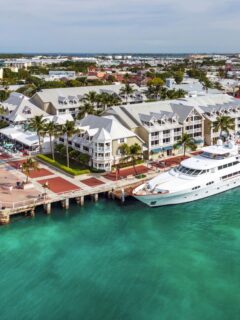