Travelers from all over the world usually research safety and Mexico is traditionally a destination people want to visit but feel unsure about local security. A recent survey from Mexican authorities revealed valuable information for tourists and expats interested in moving to this country.

The National Institute of Statistics and Geography (Inegi, by its Spanish acronym) recently performed the National Survey of Urban Public Insecurity on the perception of insecurity and mentioned the 10 most unsafe and the 10 safest popular destinations in Mexico. Later on we will also recap where people feel the safest.

During the past few months, the perception of danger among Mexicans has increased and the study showed that 67.4% of Mexicans over 18 years old feel unsafe where they live.

The recent results represent the second quarter of the year 2022, and compared to the first quarter —results published in March— the numbers have increased, Mexicans are feeling more insecure, especially in certain destinations, mentioned below.

The Mexican president, Andrés Manuel López Obrador, declared on Monday that despite the increase in insecurity perception revealed by the study, national safety has improved.

López Obrador said: “It is improving, reality is one thing and perception is another, what is true is that there is more confidence. We still have to continue working to further reduce the incidence of crime and make people more aware of it. There are states where there have not been good results and we are working on that”.

Here is the list of the cities and popular destinations in Mexico where people feel more unsafe and the cities where they feel safer:

Top 10 Most Unsafe Destinations In Mexico

The state of Zacatecas is ranked among the most dangerous states in Mexico and its city Fresnillo is the place where Mexicans feel more insecure, 97.2% of locals stated that they don’t feel safe there.

The second city is a touristic destination, Zacatecas, where over 90% of the population feels unsafe. Next, 89.7% of Mexicans declared feeling unsafe in Ciudad Obregón, in southern Sonora—the state for which the United States recently issued an alert.

Guadalajara—considered one of the best cities in Mexico according to Travel + Leisure— is among the cities where Mexicans feel insecure.

And the popular Cancún is also considered dangerous by locals. Also, the Mexican government recently deployed over 300 army soldiers to keep tourists safe.

These are the most popular destinations for travelers where people feel unsafe:

The least dangerous city in Mexico is San Pedro Garza García, where only 15.1% of Mexicans feel unsafe. For the study, experts considered 16 boroughs in Mexico City, and the Benito Juarez area was considered the safest in the capital, only 24.2% of residents declared feeling insecure.

Residents in Puerto Vallarta have been feeling more fearful during the past few months. In the first quarter, 26.4% of interviewees felt unsafe while in the most recent report that number increased to 41.0% but it is still among the popular cities where people feel safer in Mexico.

These are the most popular destinations for travelers where people feel the safest. Again this is based on the percentage of people who feel unsafe on in their cities.

U.S. Issues New Alert For Americans Traveling To These 2 States In Mexico 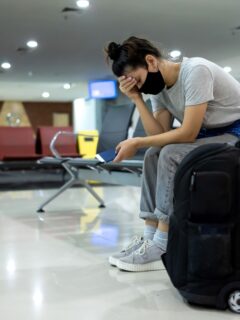 Previous
Air Travel Chaos Could Last At Least Another Year

Next
Travel Between 3 Iconic European Cities For Less Than $30 – Here's How To Do It
Click here to cancel reply.

Where were these percentages taken from? Who took these surveys? And when? Out of how many people? This article seems like clickbait bs. Telling me someone's "feelings" really doesn't help. I'm from Oakland, CA and I don't always "feel" safe there either 🙄

“ reality is one thing and perception is another” I totally agree with this statement. People who feel insecure walking on the streets or are wearing face masks because they are afraid to die from a virus, have put themselves in this situation because they watch too much TV. Instead of being brain washed they should start getting out, walk the streets, and socialize with normal people who aren’t wearing face masks. The problem here is more psychological than about crime.

@Christian, I've been to Mexico recently and the locals we met were wearing a face-mask by their own choice, not because the government said so. In the streets (of Mexico-city) everybody was wearing two or sometimes even three facemasks, and even though we didn't wear one outside it's a bit harsh to say Mexicans are not 'normal' people when they choose to wear one. Since when do we need to complain about what other people wear or don't wear?

Why, why, why would this article be published? Why not just say that Mexico is unsafe and leave it at that? There's nothing shocking there. The percentage of people feeling unsafe is really immaterial. It could be 1%, but if you're that person who gets robbed, burglarized, or attacked and injured, it really doesn't matter. Mexico has always been a dangerous country for residents and tourists, and that isn't going to change anytime soon.

What do feelings have to do with safety? Do criminals care about your feelings?