Top 3 International Destinations Where Travelers Are Headed For Thanksgiving

Thanksgiving is right around the corner, and now that travel restrictions have dropped, a record number of Americans are expected to fly abroad for a much-needed family break. Based on the current data available, Allianz Partners has unveiled the top three international destinations they are heading for the national holiday, and one thing is clear:

Mexican beaches are hot right now, and there’s no place vacationers would rather be.

For months now, we have been tracking the country’s rapid rise to the post of King of Tourism. While several Caribbean destinations limited tourism across most of 2020 and 2021, the Latin giant surreptitiously secured a foothold in the industry as a visitor-friendly beach getaway, and it has continued to lead booking trends in spite of the region’s wider reopening.

If there’s one thing the latest research conducted by Allianz Partners tells us is that no matter how many more countries abandon their strict policies, Mexico will remain America’s favorite.

Cancun Tops The Ranking For A Third Consecutive Year

In total, the group reviewed two million+ itineraries to be fulfilled over the Thanksgiving period, with the sole aim of finding out which cities are most popular among Americans planning on traveling this year, both domestically and internationally. Leaving competitors in the dust, Mexico’s best-rated sunny hotspots dominated the top three entirely.

To be specific, Allianz looked at data from round-trip flights booked between the peak departure period, namely November 19 and 24, with November 25 to 29 as returning dates, and for the third year in a row, they have concluded Cancun and the Mayan heartland are the number one international destination for Americans during Thanksgiving.

The top three are the following:

For five non-consecutive years out of six, when the research was first conducted, Cancun charted atop the list. The only exception was in 2019, when its strongest competitor, Punta Cana, overtook it briefly. This is hardly a surprise, taking into account the record number of fall arrivals being recorded, which have already exceeded pre-pandemic levels.

Will Cancun Ever Be Surpassed?

Placed at number two on the list, San Jose del Cabo is inching ever closer to snatching Cancun’s crown. For three years now, the Cape city has peaked at the runner-up slot, but it’s a fact it’s now leading luxury tourism in Latin America and even surpassing the Quintana Roo city in both occupancy and overall recovery rates.

This year, San Jose del Cabo and Cabo San Lucas, which form together a joint destination, have grown by a record 17.9 percent already, overshadowing Cancun’s 14.6 percent. Having ascended from a much lower number six in 2019, there is simply no denying the Capes are slowly but surely becoming the ‘new Cancun.’

However, as things stand, the Riviera Maya jewel remains untouchable. In total, 350,000 more tourists have visited Cancun during the shoulder season compared to 2019, and heading into Thanksgiving, and to an extent, the colder winter months, we expect Americans to descend upon the Mexican Caribbean in droves. So far, there are 9 million airline seats available, 38% more than there were three years ago.

Lastly, there’s Puerto Vallarta, peaking at number three for a third consecutive year. It is part of Mexico’s official triad of world-class destinations, alongside the aforementioned Cancun and Los Cabos, and despite posting much more moderate numbers, it’s still seen a hotel occupancy of 71.2% throughout the summer months.

On average, occupancy across Mexico was much lower at 57.8%, proving Vallarta is one of the most promising Pacific hubs. The gloomy travel advisories issued by U.S. authorities also don’t seem to be having an impact, with Mexico still poised to finish 2022 with 42.3 million guests, only 6% fewer than the reference year preceding the crisis.

In comparison, there are countries reporting dire 65% or 31% drops in arrival figures even after reopening.

Within the extended top ten, London features at number four, being the United Kingdom’s highest entry since 2019, largely due to the multitude of flights offered between the U.S. and Britain and the latter’s loosened entry requirements. At present, Americans no longer need to present a vaccine certificate or a negative test flying into the U.K.

Moreover, they are welcome to use E-Gates upon landing at specific entry points. Other destinations mentioned include Montego Bay, in Jamaica, set to host a series of nonstop flights from America this winter, and 2019’s former winner Punta Cana. The leading international destinations for Thanksgiving can be seen in full below:

Those planning on taking an extended break to travel abroad this year should plan well in advance before prices start to get prohibitive: fall travel has become 42.9% more expensive this year versus 2021, reflecting recent economic turmoils. If you still haven’t made up your mind and you’re in need of inspiration, perhaps you could use this list as inspiration to book those flights right away. 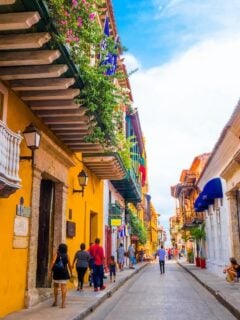 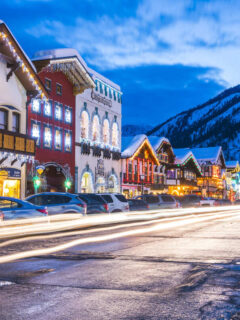 Next
This Is The Prettiest Small Town In America For Winter Getaways
Click here to cancel reply.

Spending the Thanksgiving break in Catania (Sicily). Somehow it didn't make the list.