Travelers Evacuated As New Wildfires Break Out On Greek Island

More than 2,000 people have been evacuated as wildfires rip through the Greek island of Evia, a large island to the north and east of Athens.

Greece has been battling destructive fires for over two weeks as the country suffers its worst heatwave in decades, with record-breaking temperatures exceeding 45C (113F).

Greece has been dealing with a heatwave for weeks, forcing the Acropolis of Athens to close earlier this month to protect visitors and employees. This heatwave has caused real devastation in the form of major wildfires across the country.

Since July, fires have caused destruction on the island of Rhodes, forests to the north and southeast of Athens, and parts of the Peloponnese peninsula.

As the heatwave continues, several new wildfires have struck the country in recent days.

Today, Euronews reported that Greek authorities are battling fresh fires near the capital city Athens and on the island of Evia that broke out this morning.

The Greek fire brigade said this afternoon that the fires have still not been contained and are approaching the holiday resort of Marmari, with boats ready to evacuate locals and tourists immediately. A Serbian tourist waiting on the beach for a ferry said it was like an apocalyptic movie.

A second fire is burning in the Vilia area northwest of Athens.

Fires in the Peloponnese region are said to be stable and fires in the northern Athens suburb have subsided, but the military are patrolling the area over concerns that the fire could re-start.

“The situation in Attica (which encompasses Athens) is better but we are afraid of the danger of flare-ups,” said Civil Protection Chief Nikos Hardalias.

Civil protection officials announced on Sunday that there was a “very high risk” of fire in many parts of Greece.

The U.S. Embassy in Greece issued a natural disaster alert on Friday, Aug. 6, warning travelers of the ongoing wildfire threat and advising them to avoid unnecessary travel.

“U.S. citizens should exercise extreme caution in the affected areas, including in Evia, the area of Ancient Olympia in Ilia, Eastern Mani, Fthiotida, and around Kapandriti and Polydendri in the northern suburbs of Athens.

With most of Greece under extreme or high risk for fire, be aware that new fires may break out anywhere in the country with little to no warning.”

The EU said it was mobilizing one of its biggest responses to tackle the wildfires affecting Greece and several other European nations.

On Sunday, Prime Minister Kyriakos Mitsotakis expressed his “heartfelt gratitude” to countries that had sent assistance, including France, Germany, and the UK.

“We thank you for standing by Greece during these trying times,” he wrote on Twitter.

Wildfires Are Affecting Other Parts Of Europe

It’s not just Greece; the heatwaves are fueling fires in other parts of Europe. Fires have also raged in the south of France, and Sicily Italy reported temperatures of 48.8C (119.8F), which some scientists believe could be the highest in European history. The fires have caused huge damage to the landscape on the Italian island of Sardinia.

Travelers with plans for affected countries should closely monitor the situation and watch the daily fire risk map from the General Secretariat for Civil Protection.

Greece ‘One Step Away’ From Stricter Measures On Travelers 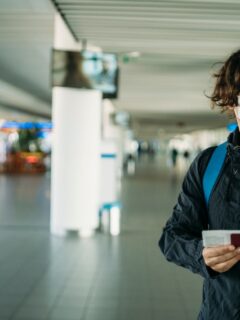 Next
Airlines That Have Banned Cloth Masks for Passengers
Click here to cancel reply.