New York City’s Times Square is famous around the world for its epic New Year’s Eve party attended by tens of thousands of people and broadcasted on television across the world. Scenes of the city in its holiday bliss packed with merrymakers and celebrities, performances from top acts, and the epic crystal ball drop at midnight certainly make it appear as an incredible place to ring in the new year, but is it really the best?

New Year’s In NYC Is Cold, Crowded, And Expensive

Behind the polished façade we have all seen on TV lurk some serious downfalls to celebrating New Year’s Eve in Times Square. The popularity of the event from visitors from around the globe means that finding a viewing spot for the ball drop or one of the performances can be extremely competitive.

Revelers often have to arrive many hours before the start of the festivities in order to get into a good viewing position. The increased crowds in the city at this time also means that prices for accommodation soar in an already expensive market, and the weather is often below freezing and can even include snow.

While there are plenty of other ways to celebrate the new year in New York, there are also many other cities around the world that host spectacular parties on December 31st. Here are our picks for cities that will throw better parties than what you will find in Times Square:

The famous Copacabana Beach in Rio is home to one of the most epic New Year’s Eve celebrations in the world. Far from the freezing temperatures of Times Square, Rio’s beach parties can attract upwards of 2 million people. Streets throughout the city close to traffic from 6 pm to 8 am allowing plenty of time for street parties, samba dancing, and of course, an impressive fireworks display.

What you need to know: It is tradition to dress in white clothing – a symbol of welcoming the new year with peace and prosperity. So if you don’t want to stick out, be sure to follow suit.

The Scottish capital of Edinburgh is a fantastic place to spend New Year’s. The city’s epic 3-day Hogmanay celebration runs from the 30th of December to the 1st of January and features a torchlight parade throughout the City, a massive street party, live music, and fireworks.

Celebrations conclude on January 1st with the Loony Dook, an event when around 1,000 locals and visitors march through the streets of nearby South Queensferry decked out in wacky costumes before ultimately plunging themselves into the frigid waters of the Firth of Forth Estuary, costumes and all.

What you need to know: Most events are ticketed, so be sure to visit the official website and book early. Unfortunately, officials have just announced that this year’s Loony Dook celebration is canceled, but hopefully, it will return in 2024.

It may come as no surprise that the Thai island famous for its full moon parties also throws an incredible New Year’s Eve party. Koh Phangan’s celebrations typically begin days before and take place along the bar and club-lined beaches in Haad Rin. Think bumping techno music, neon clothing, buckets of booze, and plenty of dancing. If you make it to midnight, you’ll surely be blown away by the fireworks display.

What you need to know: If you’ve visited before, know that prices for accommodation will be much higher during New Year’s as it is one of the most popular and most crowded times to visit.

If you are looking for an unforgettable New Year’s party in the U.S., look no further than Las Vegas. The strip is shut down to traffic, setting the perfect stage for an all-out celebration. At midnight, the casinos along the strip coordinate a massive fireworks show that will put other cities to shame. Vegas’s venues attract top acts, and the parties always spill into the next day, as bars in the city have no regulated closing time.

What you need to know: If you are planning to celebrate on the strip, make your hotel and dining reservations as early as possible to ensure availability. If you want to be on the strip at midnight, make sure to plan extra time to get there, as the road closures and crowds can make getting there slower than normal.

New Year’s Eve in Reykjavik is a truly unique experience. The night begins with massive bonfires throughout the city. Each year, the Icelandic Search and Rescue Team sells fireworks as a way to raise funds for their operations. The locals turn out in a big way to support them, meaning that the city is FILLED with fireworks at midnight.

After all the pyrotechnics are used up, the party moves to the bars and house parties throughout the city, where they last until the early hours of the morning. Conveniently, the sun does not rise until 11:19 am, so you’ll have plenty of time to sleep off your hangover the next day.

What you need to know: On New Year’s Eve, anyone is permitted to shoot off fireworks, and accidents are not uncommon. So be alert, and bring eye protection if you are concerned. For tourists hoping to get a glimpse of the Northern Lights, be advised that you’ll have to wait until the smoke from the fireworks clears to have a chance to see them. 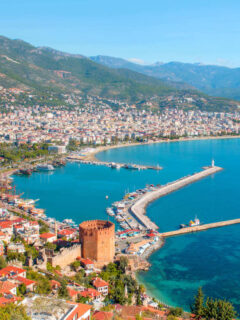