After months of being placed on hold following its introduction, Costa Rica’s Digital Nomad visa is finally being enshrined into law this week. Surprisingly, the visa process turned out to be much simpler than initially proposed, without all the bureaucratic hurdles that would have kept nomads from applying.

Costa Rica is one of the trendiest destinations in the world right now. Located in Central America, arguably the best destination for digital nomads and solo adventurers, it is a country replete with natural wonders, with a quarter of its territory made up of tropical jungles and other incredible natural scenery.

Now, it is also one of a limited number of nations in the vast American continent offering remote workers the stay to linger a while longer:

Costa Rica’s New Digital Nomad Visa Has Made Its Debut

Nearly a year following the announcement, President Rodrigo Chaves, Costa Rica’s commander in chief, signed the regulation on June 4 at the Casa Presidencial, paving the path for millions of digital nomads to move to the country. Besides the official launch, the final document includes some important changes applicants must know.

Now that it’s been published, we can safely say that Costa Rica’s Digital Nomad Visa is one of the easiest to apply for among the 45 countries with similar laws in place. The text President Chaves has signed does not include any of the bureaucratic obstacles previous versions presented, which were seen as an impenetrable barrier for young nomads.

When the visa was first presented, Costa Rica had set out a number of rules travelers would have to follow in order to apply. While some of them have naturally remained, such as the financial threshold, others were fully scrapped. Essentially, prior to this week’s update, applying for a visa to live and work remotely in Costa Rica was a lot more cumbersome.

Besides criminal checks, it even included attending a Consulate interview, something that would discourage millions of foreigners from considering making the Central American country their new temporary base. Fortunately, unlike other nations that have remained strict, Costa Rica no longer expects digital nomads to undergo any of the following:

One of Central America’s big advantages over North America, or the rigorous European nations, is the region’s more relaxed approach to immigration. At first, it looked as if Costa Rica was willing to challenge that status, but internal pressure has reportedly led the government to backpedal and keep things easy.

As stated in a joint report published by Cinde, the Costa Rican Coalition of Development Initiatives, and Procomer – Promoter of Foreign Trade, these rules were ‘unnecessary’ and ‘disproportionate’. Thus, the revised regulation can be then credited to them and other individuals, including former legislator Carlos Ricardo Benevides, who suggested the Law.

There have been other major updates set to benefit digital nomads and increase the number of eligible travelers. Now, the country will no longer require the authentication of signatures, a step that would involve having a Costa Rican Consulate legalize all signed documents included in the visa application.

Additionally, the government has removed the need for legalizing signatures for those who are already present in Costa Rican territory. Celebrating the advancements, the President acknowledged this is a ‘visionary law’ ahead of its time, and congratulated the ‘chamber’ for pushing his Administration to sign it.

What Requirements Remain In Place?

Currently, in order to be eligible, digital nomads must have a stable income of no less than US$3,000 per month when traveling alone, or US$4,000 if they plan on bringing any family along with them. In addition, their whole income must originate from outside the country, and they will not be subject to taxing like other habitual residents of Costa Rica.

In sum, Costa Rica expects you to comply with three simple requirements:

Applications can already be submitted via this link. Nomads are reminded that, once the visa is granted and they are authorized to travel to Costa Rica under this category, they will have three months to obtain a so-called ‘migratory accreditation document’. This may involve attending a face-to-face appointment in Costa Rica with an immigration officer.

Previous
These are The Top 3 Destinations In Mexico This Summer 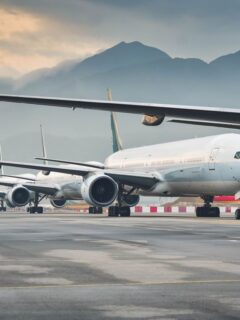 Next
These Are The 3 U.S. Airlines With The Most Delays Amid Travel Chaos
Click here to cancel reply.

I wonder if a driver's license from one's home country will remain valid or a border run will be needed to keep driving privileges in Costa rica.