Even though we’re still some months away from the highly anticipated border reforms of Europe, authorities are already predicting a ‘massive increase’ in wait times at entry points from 2023. Next year, newcomers who do not need a visa will need to apply for a new travel permit, as well as be fingerprinted when crossing the outer Schengen border.

Schengen is a passport-free zone of Europe which includes, at present, 26 different countries, whether they are members of the European Union (EU) or the European Economic Area (EEA). Moving within it is as easy as crossing from one U.S. state to the other: there are no identity checks, and people are allowed to country-hop freely as if they were traveling domestically.

It is one of Europe’s greatest achievements, as well as one of its greatest weaknesses, at least when the bloc is faced with cross-national crises:

Sharp Increase In Wait Times At European Borders Are Predicted

In hopes of protecting Schengen and tightening checks on third-country nationals after a traumatic 2015, Europe has been preparing for years to introduce a new Entry-Exit System, or EES, which will see all foreigners seeking entry into the territory undergo registration upon arrival. This involves providing fingerprints and other sensitive information.

The EES will help ensure unchecked migrants in Europe are identified and processed, and ‘overstayers’ are promptly punished. As per Schengen rules, non-EU, EEA, or Swiss citizens can only remain in the border-free area for up to 90 days out of any 180-day period. A non-European national staying longer than 90 days at a time is in breach of immigration law.

This means those who break the rules will get caught the second they enter or exit Schengen, as their biometric data will be stored by Frontex, the agency responsible for Europe’s border security, for this exact same purpose. On the downside, the Entry-Exit System will lead to longer border delays, at least during the initial period of registrations.

One of the first to trial the system, the Czech Republic reported an average processing time of only 89 seconds, but other recent reports issued by other EU members have been far more troubling. In a revised ‘compilation of comments’ concerning the implementation of EES, different countries expressed a unanimous opinion that longer delays are inevitable.

Germany, for instance, conceded ‘control times’ for passengers will ‘increase significantly’ during the roll-out of EES. This has been corroborated by their neighbor Austria, whose response reads, ‘we expect process times to double compared to the current situation‘. Over in the Balkans, Schengen candidate Croatia shared its pessimism:

They have tested ‘on multiple occasions’ both stationary and mobile equipment at borders in preparation for EES and have established ‘the waiting time for border checks will certainly be significantly longer‘. The 45-page long document also includes commentary from Portugal, France, Italy, and other European tourist hotspots favored by Americans.

This is the first time EU members have spoken this candidly about their expectations for EES, and while we appreciate their honesty, it is unlikely to help reassure tourists that Europe’s tourism sector is indeed prepared for any such drastic changes following the chaotic year it’s had. Based on these findings, we can expect a new summer of travel disruption in 2023.

Why Is The Entry-Exit System Being Implemented?

The Schengen Agreement has come under scrutiny in recent years for its role in the undermining of European security. After all, nations participating in the pact have agreed to abolish passport control between themselves, and while this is great for trade and the promotion of freedom of movement, it is certainly not a perfect, infallible system.

During the 2015 migration crisis, the fact that border checks have been abolished throughout most of the EU contributed to the uncontrolled movement of undocumented migrants around the continent, seeing that once they cross any Schengen border, they can, in theory, travel onward to other countries in the zone hassle-free.

As a result, several countries within Schengen have since established temporary checks with their neighbors, citing irregular migration flows as a major concern, in an attempt to regain some of their sovereignty when it comes to national borders.

It is clear Schengen needs to be strengthened and border policies revised to fit the current political climate.

Fingerprinting Is Not The Only Thing Americans Should Prepare For

Besides installing EES registration kiosks, set to be operational from May 2023, the continent is racing to launch its new European Travel Information And Authorization System, shortened to ETIAS, in November 2023. A year from now, Americans traveling to Europe will be required to complete an online form and pay a €7.00 fee ahead of departure.

ETIAS will be valid for up to three years, and the fee is only collected upon the first application or renovation of the permit. The requirement applies not only to Americans but all tourists who enjoy a visa-free agreement with the EU, such as Canada, the United Kingdom, and Mexico. Needless to say, those who do not hold a valid ETIAS will be denied boarding. 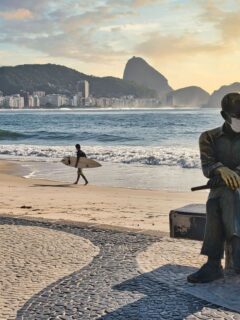 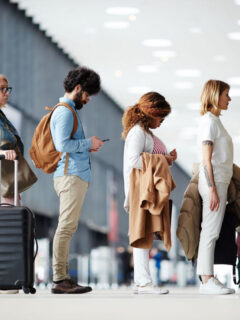 Next
This Airport Has The Worst Immigration And Customs Wait Times
Click here to cancel reply.

100% agree with DJ. This is that perfect excuse to go to that area that you kept avoiding. Anyone who cherishes freedom, knows anything about international business/offshore activity, international taxation and foreign affairs should realize that the EU is nothing but a global menace. It is the modern day Soviet Union, amazingly similar. Except they have technology like this supporting it.

Let the market decide. Balkans are a better go (plus, they're not working on a central bank digital slave coin).

No. Resist. Do not comply. Paper passports can be cancelled and replaced if lost or stolen. You cannot cancel or replace your iris or fingerprints if hacked and stolen. Travel to places that don’t require this. If this means the break-up of Schengen, then so be it.