Hong Kong Bans All Flights From The U.S.

With the rise in the Omicron variant, Hong Kong announced last week that there will be a two week long ban on all flights departing from the United States, as well as from SEVEN other countries around the world. This ban was set to begin this past Sunday January 9th and is expected to continue at least until January 21st.

Cathay Pacific, the flag carrier for Hong Kong, typically runs seven direct routes from the U.S. throughout the year  – from cities such as San Francisco, Dallas, Chicago, Newark, Los Angeles, New York, and Boston. These routes are typically frequented by pleasure seekers, as well as being popular for business travelers due to the city’s reputation for economic and financial dealings. With the recent suspension of these flights, many passengers who were hoping to transit or even locals returning home to this cosmopolitan city, may find themselves stuck – at least for the coming weeks.

This two week ban on passenger flights is not just exclusively for the United States, it also includes Australia, Canada, France, India, Pakistan, the Philippines, and the United Kingdom. In announcing these new measures, Hong Kong Chief Executive Carrie Lam described the new restrictions as “decisive and comprehensive” — more than any other restrictions the city as seen over the past two years. Lam noted that the decision to cancel these flights was in response to the “drastic” increase in imported coronavirus cases. Currently, the routes from these eight countries are some of the most heavily trafficked flights going in and out of the city of Hong Kong.

These measures come as new Omicron clusters have emerged over the past week within the city. This outbreak is linked to several Cathay Pacific crew members who broke isolation rules — dining in restaurants and bars, before testing positive.

As of now, there are only a handful of community infections within Hong Kong due to community spread, but the severe new restrictions are also a direct result of the low vaccination rates, particularly among the elderly — who are only 20% vaccinated.

Hong Kong also announced yesterday that they will ban air passengers from ALL Group A countries —  (those designated as “high-risk”) from TRANSITING through Hong Kong International Airport. A similar passenger transit ban occurred in March 2020 early in the pandemic, but gradually resumed in the subsequent months (apart from mainland China).

This transit suspension will begin on January 15th and run at least until February 14th, although the dates are subject to review. There are 150 different countries that are currently being categorized as “high-risk”, leaving  many passengers scrambling to rebook their flights and change their plans.

Such popular tourist destinations as Vietnam, Cambodia or Thailand which are currently open to tourists, may see a drop in travelers due to these new transit restrictions.  This comes just as Thailand announced more additions to their Sandbox program this past week, to destinations Krabi, Phang Nga, and Koh Samui. Hong Kong International Airport serves five cities in Thailand, with dozens of flights a day to places such as Phuket, Bangkok, and Ko Sumai. Now, if a traveler is coming from one of these 150 “high-risk” countries, Hong Kong will no longer be an option.

Another Option For Travelers

Not all is lost for Asian travel. Singapore Changi Airport may be the best option for travel throughout the region. Singapore is currently the 18th busiest airport in the world, flying to various and exotic destinations. As of now, Singapore is allowing any passenger to transit through the popular airport, as long as they test negative 48 hours before their flight. 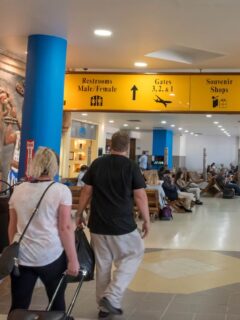