One of the most popular air carriers between Europe and North America, KLM and a number of other Dutch airlines have announced masks will no longer be a mandatory requirement on any of their flights, as The Netherlands plans to lift all remaining Covid regulations on March 23, 2022.

Even though the news has surely been welcomed by Covid-fatigued passengers, it does not mean KLM and its competitors are following official guidance, as the government has not yet agreed that face masks should cease being compulsory on flights.

Earlier this week, the Netherlands announced it will be abolishing most of its Covid rules on March 23, including mandates concerning the use of face coverings both indoors and outdoors. While these will come into effect across the entire country, air travel has been left out.

On March 15, the Cabinet justified its decision of continuing to enforce mask usage in planes as that is part of an ‘international agreement’. As expected, airline officials were not pleased, with not only KLM, but also Transavia, Corendon, and TUI Nederland rebelling and scrapping face masks on their own account.

From March 23, these airlines will not oblige customers to cover their faces while traveling, despite statements made by the Dutch Government. Transavia and TUI representatives went as far as calling the government’s decision ‘irresponsible’, claiming it would increase aggressiveness among passengers.

Flag-carrier KLM, however, was more cautious in its wording, with their spokespeople calling the government’s ruling ‘disappointing’, considering that mask usage will be scrapped in every other closed environment. As pointed out by KLM, the industry as a whole considers this approach ‘inappropriate’, taking into account the current stage of the pandemic.

In backing its own decision to break ranks with the government, KLM stated the decision is ‘at odds with European and international developments that we follow closely’. Indeed, Europe has recently started moving away from its hardline tactics, which aimed to keep Covid out as much as possible during the crisis.

A number of European nations have recently scrapped all health protocols at their borders, including Montenegro, Ireland, Hungary, Romania, and several others. As The Netherlands itself prepares to open up further on March 23, with mandatory mask usage due to end, airlines seem to be feeling targeted.

KLM Holding Talks With The Government Regarding Mandatory Mask Usage

In an official statement, KLM confirmed they are in consultation with the government, as they believe ‘wearing face masks is no longer explainable‘ to passengers. Transavia is also strongly opposing the measure, with a spokesperson telling NH Nieuws that the airline was ‘displeased’ and ‘dismayed’ at the scrapping of face masks on public transport, but not planes.

In a statement, Transavia claimed ‘it is not true that this is due to international agreements’, and again raises the issue of flight safety, as the unpopular measure ‘leads to non-compliance and more aggression.’ Lastly, TUI Nederland is reportedly even ‘angry’ at the mandate, as cited by a regional broadcaster.

For TUI, ‘passengers are less and less willing to comply with this obligation, especially while it is not enforced in the rest of society. According to the airline, enforcement of mask usage has recently led to ‘an increase in aggression on board‘ towards both crew and passengers, further urging the government to reconsider.

In TUI’s own words, they will ‘no longer monitor compliance with the mask obligation on board’ and the Cabinet – the task force overseeing Covid regulations in the country – is again asked to ‘convert this obligation to wear a face mask into an urgent recommendation’. This would mean mask usage would cease being regular unless there is an emergency.

Responsible for sending the travel industry into a tailspin at the end of last year, when it had already been severely impacted, the Omicron variant is finally showing signs of receding, as booster campaigns across Europe ramp up and more nations relax entry curbs. In March only, 11 removed all Covid entry conditions.

Echoing industry demands for a return to normal, the International Air Transport Association (IATA) has also recently called for the lifting of all remaining travel restrictions in Europe. Throughout the pandemic, travelers have faced enormous challenges relating to the patchwork of cross-border measures within the continent.

With a pandemic-wary public, and a battered travel industry pushing for the reinstatement of pre-pandemic normality, we expect more airlines to announce a change in their mask guidelines soon. As of now, Dutch authorities have yet to respond to the airline boycott.

When flying with either KLM, Transavia, or TUI Nederland from March 23, either within the European space, or transcontinentally, passengers may no longer be expected to carry face masks and cover their mouths and noses at all times. Still, travelers should keep up to date with the latest developments and make sure they comply with all existing regulations. 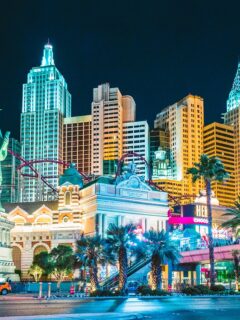 Previous
10 Adventurous Things To Do Near Las Vegas 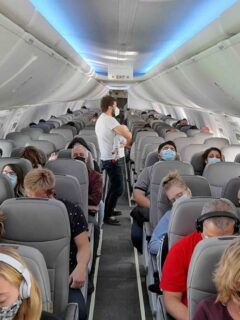 Next
Will The New Covid Variant BA.2 Cause A Resurgence In Travel Restrictions?
Click here to cancel reply.

The reason they don’t want to fully remove the use of muzzles is to keep the Covid theater on life support, so that they could easily reboot it in the next winter time. I am glad Europe is finally waking up to it, which makes it a more attractive place to travel. But I am still holding off for my next trip until they completely get rid of all the Covid rules and entry requirements.

I hope there's a country that bans the use of facemask. So tired of these face diapers. Completely useless and they haven't done anything at all. Look at Hong Kong 99% wear mask and they still have a huge spike in covid

It has NOTHING to do with "catching" anything. It's just ACTIVATION / weak system.

Finally some common sense from our Dutch friends

It is for sure not useless and does prevent infections - not only with Covid but other viruses like colds, flu etc....on the other hand wearing a mask for hours is very unconvenient and makes many people, including me, feel uncomfortable.

So it will be a good decision to put it a everyone's own discretion - those who feel more comfortable and protected if wearing a mask as well as the others who don't want to do so. This should be the future, and it is good to hear that first airlines start scrapping their mask mandates on board.