Just when you thought Mexico would finally catch a break after its well-documented battle to keep sargassum seaweed away, the country is set to enter a new hurricane season, lasting from now until November. Hurricanes can be highly disruptive phenomena, and this has left many tourists wondering: what can they expect if they’re visiting this fall?

Lately, Mexico has doubled efforts to lure in more tourists amid a string of natural occurrences, ranging from the aforementioned smelly algae littering its pristine Caribbean coast, to unbalanced bacteria levels in popular cenotes around Tulum. Interestingly, travel demand has remained high and the country has continued to smash records regardless.

Of course, the prospect of intermittent rain, and even tropical cyclones, could be a deterrent to tourism and slow Mexico’s upward course. But just how often do these occur?

Every year, different areas of Mexico are issued weather alerts, specifically throughout the months of September, October and November, when precipitation tends to be heavier and tropical storms happen regularly. Associated with these events, hurricanes are ‘more likely’ to hit over the fall season, including coastal areas.

What are the risks, then, involved with visiting Cancun during this season? After all, nearly half of all tourists arriving in Mexico are drawn to the Riviera Maya and its crystal clear waters, and judging by these other recent estimates, we doubt the Caribbean pearl will see a relatively quieter ‘low’ season this year (as it used to in the pre-Covid years).

We’re glad to inform you the chance of being caught in the midst of a natural catastrophe may not be zero, but it’s extremely low. Yes, Cancun can, and has got struck by hurricanes in the past, but this is why you shouldn’t be particularly worried your hard-earned beach break will turn into a doomsday movie:

When Was Cancun Last Hit By A Deadly Hurricane?

The last big hurricane recorded in the area was 2005’s Wilma, which battered the Caribbean coast on October 21 that year, affecting not only Cancun, but also parts of the U.S. and Cuba. It was a major hurricane, claiming 52 lives, though roughly 57.7% of victims were on the U.S. side of the border.

In Mexico, a total of 8 lives were lost, proving that, albeit a danger to life, casualties remained low. Additionally, no hurricane of Wilma’s magnitude has been recorded near Cancun or other Riviera Maya hotspots since then. In other words, it’s been nearly two decades since this catastrophe – prior to that, the last one took place seventeen years earlier.

1988’s Gilbert was much deadlier, claiming 202 lives in Mexico alone, though it’s seen as a once-in-a-lifetime event. In fact, it remains one of the most intense cyclones in Mexico’s recorded history, with later storms being much more mild, such as 2005’s Wilma. The main takeaway from this? In 34 years, Cancun was hit by hurricanes only twice.

These two catastrophes are exactly seventeen years apart, and 2022 is the 17th year since Wilma. Still, this shouldn’t be a particular concern as nature is highly inconsistent, and precise time intervals do not apply. In reality, the chances of experiencing a hurricane in Cancun, even this year, remain incredibly small.

The Risk Of A Major Storm Hitting Tourist Zones Is Low

As the Cancun Sun puts it, the risk of a hurricane making landfall is increased this time of year, but ‘it’s more likely you’ll just be dealing with a little more rain‘. That being said, a hurricane baptized Danielle is currently making its way across the Atlantic, though it remains at the lowest possible category 1.

At the time this article was written, Mexico’s National Meteorologic Service (SMN) informed hurricane Danielle was located 4400 km northeast of Cabo Catoche, in Quintana Roo, and as it is moving west, it does not pose a danger to Mexico’s tourist zone. So far, no hurricane alerts apply to Cancun specifically.

On the other hand, American sunseekers may want to avoid the seaside states of Baja California Sur, Jalisco and Nayarit in the next few weeks due to the risk of ‘torrential raining’ resulting from the tropical storms Javier and Kay. More information can be found on the SMN official website clicking here.

How To Prepare For Mexico’s Hurricane Season

Once again, the risk is low and there are no advisories against travel to Mexico relating specifically to storms. As previously stated, we don’t believe Cancun will have an off-season this year based on booking trends alone, but the fall usually sees less crowds, lower hotel fares and even better flight deals.

If you’re still concerned about a potential hurricane hitting Cancun, or any other Mexican destination, you can always follow the steps below:

Canadian Cities With Direct Flights To Cancun This Winter 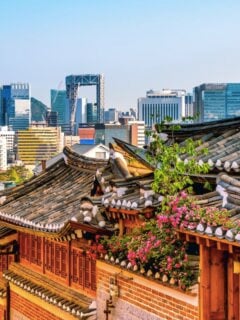 Previous
Nonstop Flights From The U.S. To Top Asian Destinations This Fall

Next
Here's Why Jamaica Is The Best Caribbean Vacation This Fall
Click here to cancel reply.