Newark Liberty International Airport (EWR) officially opened its new Terminal A late last week. The 1 million square foot terminal has 33 gates and is expected to welcome over 13 million passengers each year. It is estimated the project has cost a jaw-dropping $2.7 billion.

The opening marks the end of the project’s first phase, with 21 of the 33 new gates coming into service. Air Canada, American Airlines, JetBlue, and United will all utilize the newly opened gates. The remaining 12 gates will be operational later in 2023 and, once open, will welcome passengers flying on Delta.

Newark Airport has 3 terminals. The new Terminal A will fully replace the old one, which will soon be demolished. The long-awaited new terminal will modernize operations, provide more capacity, and prominently feature New Jersey art, food, businesses, and people.

In 2019 over 46 million passengers made use of the airport, setting a record for the facility. EWR facilitates over 1,000 flights each day via 30 different airlines. Flights to and from Newark connect travelers with 89 domestic and 79 international destinations.

Despite its status as one of the busiest in the country, Newark International Airport has long had a reputation for being dark, outdated, and run down. The new Terminal A hopes to leave that image behind as it replaces the original terminal that was built in 1973.

At 1 million square feet, the new terminal is 20% larger than the old one, allowing it to serve an additional 4 million passengers each year. They have added 14 additional security screening lanes and 60 self-serve check-in kiosks.

The new Terminal A is equipped with state-of-the-art technology intended to improve the customer experience by reducing wait times. By using 3D sensors and software, the airport will streamline operations. Check-in counters and security areas are equipped with the technology, as are the terminal’s smart restrooms, departure gates, and waypoints. Additionally, controversial facial recognition software will be utilized at ticketing counters and e-gates to confirm passenger identity.

Additionally, the new terminal has incorporated features to help reach its environmental goals of reducing greenhouse gas emissions by 80% by 2050. These features include solar panels, new electric shuttle buses, and energy-efficient lighting.

A Space That Embodies New Jersey

Perhaps the most notable aspect of the new Terminal A is its intentional design that incorporates the best of what New Jersey has to offer. Not only is the terminal decked out with local art, food, and retail options, the developers have prioritized awarding contracts to local, minority, and women-owned firms.

During the Terminal’s official opening, New Jersey Governor Phil Murphy explained the importance of showcasing New Jersey. “From uniquely New Jersey concessions to innovative public art installations and world-class facilities, Terminal A is revolutionizing travel in a state that has always been – and always will be – a model for the rest of the nation to follow.”

Several of New Jersey’s favorite eateries have set up shop in the terminal. Bang Cookies, Carlitos Barbeque Taqueria, and Jersey & Co. Gelato have all expanded their local operations to include outlets at the airport.

At the forefront of Terminal A’s New Jersey-centric design is an extensive public art program designed to reflect the diversity and creativity of the state. 27 local artists were commissioned to transform the space with their creative talents. The goal is to create a civic amenity that portrays the unique New Jersey sense of place to everyone who visits.

There are also immersive digital installations throughout the terminal. Through a partnership with multimedia studio Moment Factory, the “Forest of Firsts” comes to life. The exhibit is a digital interpretation of significant “firsts” in New Jersey’s history. 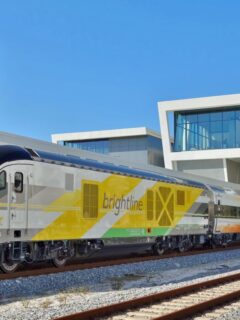 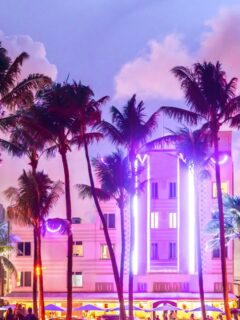 Next
Top 8 Things To Do In Miami, Florida In 2023
Click here to cancel reply.

The only good thing that I can say is that the new interiors look a bit better than most new airports nowadays. However, I like all the old styles of architecture, and really have fond memories of this place - hate this new ´copy and paste´ trend we are seeing now, especially for airports. Glad that I got to see it before they tore it down. Really hate what they did with the other two NYC airports - all white with floor to ceilings windows, so that you need sunglasses inside. And also all the seating gone, so that they can kick out the homeless and make everyone else absolutely miserable, along with limited food options. But back to EWR, it is still the only airport that I would use to go into NYC by far, love Jersey. At least it looks in keeping with the old one to some degree, and it does look like they did a decent job.

Very good news....just transfered through EWR 2 weeks ago using Terminals B and C and was surprised, how old fashioned everything was. Hope the new Terminal A will set upgraded standards now.