The construction of the soon-to-be world’s largest cruise liner began last week – with the ship set to sail in 2024.

And to mark the milestone, a steel-cutting ceremony – for what will be Royal Caribbean’s sixth ‘Oasis Class’ vessel –  took place in France on April 5, at the Chantiers de l’Atlantique shipyard.

Along with the first piece of vessel’s steel being cut, the ceremony also saw the official unveiling of the cruise liner’s name – with the latest addition to Royal Caribbean’s fleet being called Utopia of the Seas.

Having outlined the company’s “excitement” for reaching the opening stages of the ship’s construction work, Royal Caribbean International’s President and CEO – Michael Bayley – also made the following statement at last week’s ceremony:

“On the sixth Oasis Class ship, vacationers can look forward to the signature combination of Royal Caribbean experiences and many brand-new adventures that has and will continue to make the Oasis class of ships the ultimate vacation for guests of all ages.”

You can watch a short video from the steel-cutting ceremony by clicking here.

Utopia Of The Seas – What We Know So Far

Although Royal Caribbean has not announced the full details of what to expect from their upcoming cruise liner – we do know that it is set to become the first of its class to be powered by liquefied natural gas (LNG).

LNG is currently the cleanest fuel available to power passenger cruise liners – and so Utopia of the Seas is certainly a step in the right direction when it comes to a cleaner, and greener, future in the cruise world.

This will not be the company’s first LNG-powered ship, however, with Royal Caribbean’s next addition – Icon of the Seas – also to be fitted with an LNG fuel tank.

Utopia of the Seas is set to also feature other applications – that are due to be powered in a more environmentally friendly way – which should hopefully lead to the ship being more energy efficient and therefore less harmful to the environment.

Further details on Utopia of the Seas are due to be released at a later date.

When Will ‘Utopia Of The Seas’ Be Ready To Welcome Passengers?

The new addition to Royal Caribbean’s fleet of ‘Oasis Class’ passenger cruise ships – which has aptly been named Utopia of the Seas – is due to make its first passenger-filled voyage in the spring of 2024.

With the ship’s construction only just beginning last week (5 April) – it is expected to take around 30 months to complete.

Although Utopia of the Seas is set to claim the crown of being the world’s biggest cruise liner, it will not be the first time that Royal Caribbean has seen one of its ships crowned with this title.

That is because just last month its latest addition to its fleet of ‘Oasis Class’ vessels, Wonder of the Seas, set sail for the very first time – with the ship currently being the world’s largest.

The cruise liner took the title from yet another Royal Caribbean ship – Symphony of the Seas – with Wonder of the Seas measuring at an eye-watering 236,857 gross tonnage (grt) in weight and 1,118 feet in length.

However, it will not be long before there is a new ‘number one’ when it comes to the biggest cruise ships on the planet – with Utopia of the Seas set to measure at a whopping 231,000 grt.

In other news, Royal Caribbean has recently welcomed back the self-service option to its onboard buffets – which follows the recent removal of all travel advisories for cruise cruises by the Centers for Disease Control and Prevention. 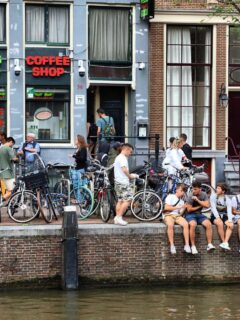 Previous
Amsterdam To Ban Travelers From Its Famous Coffee Shops 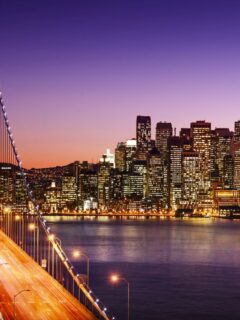 Next
10 Off The Beaten Path Things To Do In San Francisco In 2022
Click here to cancel reply.

A cleaner, and greener, future in the cruise world...? Whahahaha. I think these monsters are even worse than planes. If they want to be more environmental friendly they should not set sail at all.

@Elisa, that's the problem, they are not sailing at all, they're simply motoring - big difference.