Popular online travel company Tripadvisor has released the latest Travelers’ Choice awards for the top trending destinations in the world, and the results may surprise you. As the world threw off the shackles of the pandemic this year and started traveling again, many travelers decided to take those bucket-list trips they had been dreaming about for years.

As a result, many destinations that may not necessarily come to mind have grown significantly in popularity. Further, travelers have acknowledged their love of these destinations by leaving many glowing reviews for each.

Below are the top 10 most loved destinations in the world this year.

One of the most iconic destinations out there. Even if you’ve never heard of Santorini, chances are you’ve seen pictures. Harboring some of the most Insta-worthy views in the Cyclades, Santorini is a gorgeous island with picturesque villages overlooking the stunning Aegean Sea. Visitors enjoy exploring ruins like Ancient Thera and watching the sunset in Oia, the most visited village in Santorini.

Nearly all travelers visiting Santorini from outside Europe will find themselves flying into Santorini National Airport via a connecting flight out of another European hub. In fact, if traveling from the U.S., it’s most likely that you will have at least 2 connecting flights, as there are only a few U.S. airports that offer routes with only 1 stop (JFK, BDL, and BOS)

Another popular way to see the area is via cruise ship. Many European cruises will stop near the Old Port of Fira, where passengers can transfer from their ship to Skala Pier. Once on land, travelers can reach the top of the cliff to get into the town via cable car, mule ride, or hiking up the 580 steps to the top.

Goreme is a Turkish town in the Cappadocia region of Turkey and is another Instagram-perfect location that has grown in popularity this year. Without a doubt, one of the most popular things to do in the area is to take a hot air balloon ride to admire the rock formations known as fairy chimneys from above. Another favorite of locals and travelers alike is the Goreme Open-Air Museum, which houses remnants of churches carved out of stone.

The closest airport to Goreme is Kayseri Airport, about an hour from Goreme. There aren’t many direct connections in Europe, and most travelers will find themselves taking connecting flights. Americans have no direct routes, but there are several routes that only require 1 stop (IAD, BWI, PHL, JFK, EWR, and BOS)

The easiest way to get to Goreme from the airport would be a direct connection via taxi or prearranged pickup. However, bus routes are available as well.

Arusha itself is typically not the intended final stop for travelers heading to this Tanzanian city, many have other destinations in mind. In fact, most travelers headed to Arusha are doing so to participate in a Safari since Arusha is a common starting point for the Northern Safari Circuit in Tanzania. Elephants, buffalo, leopards, and lions await eager adventure-seekers on a safari in this beautiful region of Africa.

Most travelers will fly into Kilimanjaro International Airport and taxi into Arusha, which is about a 45-minute drive away. There are a few direct connections out of Europe, but Americans must make at least one connection. U.S. airports with only one connection include ORD, DTW, IAD, PHL, EWR, JFK, and BOS.

Natal is the capital city of Rio Grande do Norte, and is home to incredible beaches, museums, shopping centers, and sand dunes. Natal is among the best destinations for those who love the sun, sand, and outdoors. Travelers enjoy taking dune buggy rides at Dunas de Genipabu and snorkeling in Parrachos de Maracajau.

Natal does have its own airport, but there aren’t many direct connections to it. Those flying out of Lisbon can enjoy the only direct connection out of Europe. Those coming from the states will have to make at least one connection from one of the following airports; BOS, EWR, JFK, IAD, ORD, ATL, MCO, FLL, MIA, DFW, or IAH.

Ibiza is one of those destinations that is known as a party island but is also home to gorgeous beaches for a relaxing day in the sun. The capital, Ibiza Town, is home to a UNESCO world heritage site listed fortress, and its Old Town dates back over 2,500 years. If you want to party, make sure to visit in the summer when DJs like David Guetta show up for performances you won’t forget.

Londoners can enjoy a direct flight to Ibiza that will only take about 2.5 hours, and there are many other European cities with direct connections. Americans will have to make at least one connection and can do so from BOS, BDL, JFK, EWR, PHL, and IAD with just one stop.

Dubrovnik rests in southern Croatia on the Adriatic Sea. It is known for its awe-inspiring Old Town and impressive sea walls from the 16th century. Nicknamed the Pearl of the Adriatic, Dubrovnik is listed as a UNESCO World Heritage Site and is one of the most picturesque areas in the Mediterranean. Everyone visiting Dubrovnik must walk the city walls at least once for breathtaking views of the city and sea.

Tulum is a favorite destination for many Americans and is a wonderful city to visit in the Mexican Caribbean. Home to ancient Mayan ruins, gorgeous beaches, and other-worldly cenotes, Tulum is an excellent destination for those looking for a taste of everything while enjoying the perks of an all-inclusive resort.

Until the Tulum Airport or the Maya Train is finally completed, travelers must fly to a nearby airport and drive to Tulum. This most likely means flying into Cancun International Airport and booking a transport service to Tulum for a drive of about 1.5 to 2 hours. Cancun airport is exceptionally well-connected to the U.S., with dozens of direct flight options. Europe also has a fair amount of direct connections, proving the Mexican Caribbean is popular worldwide.

Rhodes itself is a world heritage site and was declared a World Heritage City by UNESCO in 1988. It is home to the Colossus of Rhodes, one of the seven wonders of the ancient world. The version you see today is a modern remake, but the site remains the same. Travelers enjoy visiting the Old Town, which is an extensive and well-preserved medieval town. You’ll feel like you’ve time-traveled walking through these ancient streets.

European travelers have many options for direct flights to Rhodes. Once again, however, Americans aren’t so lucky. Americans hoping for only one connection will have to fly out of JFK, BDL, or BOS. It is also possible to catch a ferry from other areas in Greece or Turkey.

Without a doubt, one of the most popular things to do for tourists in Cairo is to take a day trip to see The Great Pyramid of Giza, the oldest of the seven wonders of the ancient world. Cairo is a fantastic destination full of far-reaching historical significance, and there is no other place quite like it.

Europe is well-connected to Cairo, with most major cities offering direct connections. If traveling from the U.S., the only direct flights are from IAD and JFK.

Mallorca is an island off the coast of Spain, home to incredible beaches with beautiful turquoise waters. Visitors enjoy spending days in the sand, exploring famous caves like Cova del Drach, and visiting small towns like Soller, which can be reached by taking a wooden train through the scenic Sierra Alfabia mountain range.

Once again, Europeans have many options for direct connections to Mallorca. Multiple cities in nearly every European country have direct flights to the island, a testament to its popularity. Americans will have to catch connecting flights from all but one U.S. airport. EWR is the only U.S. airport with a direct flight to Mallorca. 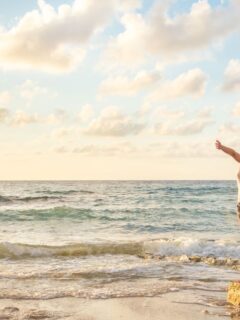 Previous
Top 6 Wellness Destinations In The U.S. To Visit In 2023