An incredible off path destination in Mexico has seen the number of vacation rentals double in a single year, as foreign visitors seek better alternatives to the over-developed, overpriced Tulum. Here, a majority of the residents still hail from Mexico, and the cost of everyday expenses has not yet surged dramatically.

Quintana Roo may be best known for its pristine Caribbean coast, filled to the brim with sunbathers all-year round, but reducing it to a beach destination-only would be a crude mistake. Home to several UNESCO-protected monuments and Magical Towns, the state’s tourism offer is, in reality, much more vast than its resort-packed seafront.

As American vacationers grow wary of Tulum’s mass tourism and consumerism culture, attention is shifting instead to this lesser-known inland location:

A Short Introduction To Bacalar

Bacalar is a small town in southern Quintana Roo, Mexico, about 25 miles north of Chetumal, the state capital, and a region of both historical relevance and outstanding natural beauty. Considered one of Mexico’s Pueblos Magicos, it precedes the Spanish colonization of the Yucatan Peninsula as one of the most important trading hubs for the Mayan civilization.

As such, the area surrounding Bacalar is home to an extensive list of historical sites, including the Archaeological Zones of Limones, Kohunlich, Oxtankah, and Dzibanche, which all feature unexplored Mayan remnants that are being slowly reclaimed by the jungle, the Spanish-era San Felipe de Bacalar Fortress, a well-preserved colonial center, and so much more.

When it comes to nature, Bacalar may not have open access to the sea, but it serves as the main gateway to Lake Bacalar, aptly nicknamed ‘Lake of the Seven Colors’ due to the various shades of crystalline blue and turquoise-green found along its extension. The lagoon itself is popular for swimming and other aquatic attractions.

Is Bacalar The Next Tulum?

Having seen a small fraction of the investment other smaller coastal hubs in the same league enjoyed, Lake Bacalar still has an emerging but promising resort scene. You will certainly not find an equivalent to Northern Quintana Roo’s ultra-luxurious tourism segment here, but this does not mean the local boutique hotels are not state-of-the-art.

In fact, Bacalar saw the number of vacation rentals double in a single year, as word got out it is a hidden gem of the Mayan World. Mr. Paul Romero, the Municipal Treasurer, confirmed himself the offer of rooms on digital platforms such as AirBnB and Booking.com increased from 300 to about 600 ‘in the last year’.

At this rate, we suspect Bacalar’s relative anonymity will not last long, given the dramatic increase in demand and its online popularity. Besides its record growth in 2022, the town has been listed by our editors as one of the Top Destinations for 2023, proving it has the potential to become an international tourism powerhouse.

The Mexican Capital Of Wellness

One of the most popular retreats in the area, Casa Hormiga is a five-star hotel with a unique jungle aesthetic, paying homage to Bacalar’s tropical nature, where guests can escape the madness of the outside world – alternatively, the growing crowds in Tulum – and find some true relaxation and ‘spiritual relief’.

Bacalar’s wellness culture and laid-back vibes are a huge part of the reason why it has been touted as the next Tulum. While the latter went from a sleepy fishing village in the 20th century to Quintana Roo’s party capital, with a sizable population of Instagrammers and American expats, Bacalar has retained its original bucolic small-town appeal.

It does not have the sea, but the stunning lake it borders is just as clear and refreshing, not to mention a fiercely protected cultural heritage. The internationalization of Tulum has, arguably, stripped the area of its Mayan character, as local businesses were pushed out of the central district to make way for hotel chains and American-style diners.

In Bacalar, Mexicans still form a majority of the wider population, and many of the restaurants and guesthouses lining the lakeside are Mexican-owned. As taxi scams and price fluctuations affect tourism in the Cancun-Tulum coastal strip, it’s no wonder tourists have started to favor this far more authentic, quintessentially Mayan settlement.

Is Bacalar Indeed The Next Tulum?

Predicting a further rise in the number of guests, Bacalar officials are already moving to regulate short-term rentals and guarantee that tourism development does not occur to the detriment of the populace, as evidenced in a number of European cities. The Secretary of Tourism of Quintana Roo, Mexico stated himself the aim is not to transform Bacalar into a new Tulum:

He immediately ruled out selling the overly commercial ‘all-inclusive’ packages that made the Mayan Riviera so popular among Americans looking to splurge for the sake of it. The plan here is to promote Bacalar as an ‘exclusive destination’ for tourists with a high-purchasing power who are invested in sustainable travel and, of course, wellness. 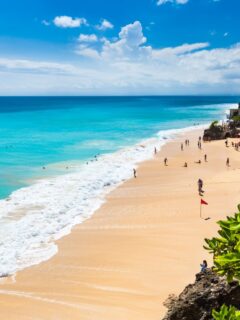 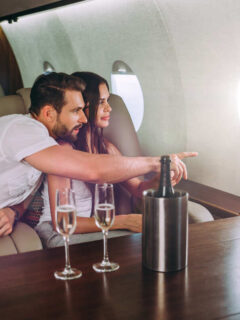 Next
Here's How You Can Fly To Cabo On A Semi-Private Jet For Less Than 600 Dollars This Winter
Click here to cancel reply.

Yes. It will be the next Tulum if you keep writing articles like this. I began visiting Tulum in the 90s. The Tulum of today is disgusting. Isolated, clear cenotes we used to swim in have been destroyed by building in sensitive areas. The beach road is a crowded, unending exploitation of a place that used to be beautiful. Please don’t compare them.

NO, for the love of nature please stop calling it the next tulum or comparing it to what that place has become. It’s articles like this that destroy hidden gems. This lagoon is hundreds of thousands of years old with living organisms in it that will die and turn it brown as fast as they put up boutique hotels.