One of the least-visited destinations in North Africa, Algeria is finally relaxing some of its visa requirements in an attempt to boost tourism in the Sahara. From 2023, Americans and other foreign visitors will no longer need to submit an application for an entry permit at the Consulate traveling to the country’s most fascinating region.

The U.S. passport ranks among the most powerful out there. With it, Americans can travel visa-free or obtain a visa on arrival in 186 countries. However, contrary to Europe and most of the Americas, where they enjoy unrestricted entry, they may find it more challenging to visit Algeria, where entry fees and visa restrictions are imposed.

Luckily, that’s all about to change – at least partially:

Why Is Algeria Hard To Enter?

Americans hardly ever have to think about visas when traveling. Normally, a valid passport and an outward ticket suffice for flying to Canada, Mexico, Europe, or South America, but not Algeria: authorities expect U.S. citizens to apply for a visa prior to departure, a bureaucracy-ridden process that often acts as a deterrent.

Algeria may be the largest country in the African continent by landmass with a vast cultural offer, but that does not necessarily mean it is accessible. In fact, it is the hardest state for Americans to enter North of the Sahara and one of only a handful in the world where they are not allowed to travel without obtaining a visa in advance.

In general, 2 fully completed application forms must be filled (typed). According to VisaHQ, handwritten forms will not be accepted by Algerian authorities. Additionally, applicants must ensure their passport is valid for at least 6 months following the intended date of return to the States, with at least two blank visa pages.

The following documents must be submitted:

The visa costs $160, and processing time can vary, though they usually aim to deliver it within 10 working days. In the meantime, applicants must surrender their passports so the visa can be affixed. Unsurprisingly, bureaucracy-wary Americans are unwilling to undergo application, opting instead for the ‘more open’ Morocco or Tunisia.

Fortunately for them, Algeria is easing its visa regime, at least partially:

According to MENAFN, a reliable source for news on the Arab world, Algeria will allow foreigners traveling to its Southern province of Djanet, comprising part of the Sahara Desert, the most sought-after tourist destination in all of Africa, to obtain a visa on arrival, as long as they fulfill two simple requirements:

As the largest African country, Algeria owns a big chunk of the desert, where numerous reserves and historic sites are located. The easing of visa rules will help diversify the local economy. It relies almost exclusively on oil and gas revenues, in stark contrast with Morocco, which borders it to the West and where the travel industry is highly developed.

The prime focus of the campaign is the Tassili reserve, dominated by sand dunes and desert fauna: due to limited tourism, the Algerian Sahara retains much of its pristine nature. Last December, a direct flight from Paris carrying 64 passengers landed in Djanet Inedbirene (DJG) for the first time in 12 years.

We have not been able to confirm the Visa On Arrival (VOA) fee nor other requirements that may enable Americans to access the zone without applying for permission in advance. We also can’t tell you whether traveling to other Algerian provinces via land or flying within Algeria is permitted under the VOA regime.

Algeria Is A Gem Waiting To Be Discovered

Despite being overshadowed by its neighbors, Algeria is just as incredible: it is stacked with UNESCO World Heritage Sites, with the Roman colonies of Timgad and Tipaza and the 11th-century fortified citadel of Beni Hammad, to name a few. As for the Sahara, it covers 90% of the territory — more otherworldly desert landscapes than all the others.

The vibrant capital city of Algiers, sitting on the shores of the Mediterranean, features an enclosed maze-like medina full of winding streets, towering minarets, and whitewashed houses. For now, in order to travel directly to Algiers, Algeria’s main point of entry, Americans will still need to request a visa in advance.

We advise our readers to obtain up-to-date information through the Algerian Embassy in the U.S. ahead of booking flights, as the visa liberalization may not have taken place yet. At this point, Paris-Charles de Gaulle (CDG) is the only international hub offering nonstop flights to Southern Algeria.

No Covid-related travel requirements have been enforced since October 30, 2022. 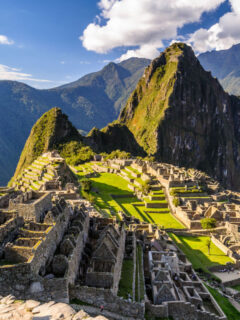 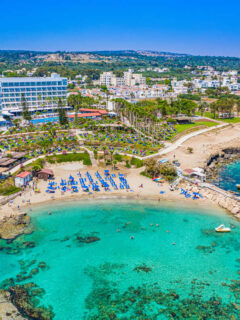 Next
This Is One Of The Top Destinations In Europe For Sun, Sand, And Culture In 2023
Click here to cancel reply.

i could visit the coast if it was easier...but the SE desert...doesn't sound interesting. pass.

@covidvaxinfo, I advise you to think about it again. The desert of Algeria is not like any other desert. It contains parts of a Hollywood movie Because it looks like the surface of the moon. And where the largest rocky city in the world are caves with strange rock paintings belonging to humans or jinn who lived in the time of the lost Atlantis. Very strange fees. Type on Google the Sifar Caves in Algeria.