Americans Can Travel To These Destinations Without A Passport

With Covid and travel restrictions starting to feel more like yesterday’s news, travel is finally picking up after two years of being placed on an indefinite hold. Whether it’s domestic or international tourism, demand is back to pre-pandemic levels, and millions of Americans are eager to jet off to nearest paradise destination.

Even as the world reopens, travelling internationally still comes with its own set of non-Covid related rules tourists must observe. Those can range from holding a passport that will not expire within the next six months, to presenting proof of having enough financial resources and insurance covering the whole duration of the trip.

These are some of the most common requirements imposed on travelers by foreign countries, with the aim of strengthening their external borders and ensuring that those applying for an entry permit are genuine visitors. Naturally, U.S. citizens remain subject to these same entry rules, which can vary quite a lot depending on the destination.

Luckily, there are a handful of places where U.S. citizens enjoy (far) greater privileges, including being allowed to travel without a passport – and no, we are not about to remind you that Hawaii and Alaska, albeit remote, are still states within the Federation. Surprisingly, holding an ID card other than a passport can still get you much farther away.

More specifically, there are currently 7 destinations Americans can access just as smoothly as entering their own country, with no excessive bureaucracy! Ready to find out how far your status as a U.S. citizen can take you? Here’s the complete list of countries and territories accepting Americans, regardless of being passport holders:

A little known-fact among travelers, Mexico in fact allows U.S. citizens to enter the country without holding a passport, as long as they travel via land. In order to be eligible, Americans must hold either a passport card, a Trusted Traveler ID (NEXUS, SENTRI or FAST cards), or a state-issued Enhanced Driver’s License (EDL).

Similarly to a passport, a U.S. passport card includes its holder’s name, photo, birthplace and date of birth, a unique identification number for the purpose of verification, and an issue and expiry dates. The big difference is they are much more affordable than regular passports, costing only $30 to apply instead of $130.

Trusted Traveler Cards, on the other hand, are documents issued to ‘low-risk travelers’ for expedited clearance when traveling between the United States and Mexico. Alternatively, those residing in Michigan, Vermont, Minnesota, New York and Washington can apply for an EDL in the unlikely event they are driving all the way South to Mexico.

For those in the Southern U.S. hitting the road this summer, there are innumerable destinations in Mexico in close proximity to the border. One of our favorites include the seaside retreat of Puerto Peñasco, a city located in the state of Sonora, on the Pacific Coast of Mexico, and only a short three and a half hour drive away from Phoenix, Arizona.

Other border cities include the vibrant Tijuana, 20 miles south of San Diego, and Ciudad Juárez, part of a trans-border agglomeration with the Texan city of El Paso, though no U.S. state bordering Mexico issues EDLs as of now. Although Mexico allows Americans to enter with other forms of ID via land, passports are still the only valid document for air arrivals.

Sharing the longest international border in the world, the United States and Canada have multiple bilateral agreements that allow facilitated travel for each others’ citizens. Unlike all other foreigners, who either need a tourist visa or a Travel Authorization to enter Canada, Americans can visit the country simply by presenting a valid ID card.

This includes a passport, a passport card, or a NEXUS card: these can all be used on any transportation mode, such as flights, cars, ferries, trains, and buses. Conversely, Enhanced Driver’s Licenses or FAST cards are only accepted at land and sea borders. Americans are reminded they can stay in Canada for up to 180 days, per entry, regardless of the ID they use.

Countless destinations in Canada are located close to the U.S. border, or a stone’s throw away from a number U.S. cities, making cross-border trips incredibly easy. A prime example of that is the Niagara Falls, a world wonder shared by both countries and sandwiched between Buffalo, in the state of New York, and Niagara Falls (the city), in Ontario.

Spending a long weekend in the metropolitan Vancouver, or any of the quaint, historical towns that are part of Canada’s British Columbia province, is also quite feasible for residents of the U.S. state of Washington, while New England, especially the states of Vermont, New Hampshire and Maine enjoy direct road links to the French-English bilingual Quebec.

Beyond the mainland, the U.S. has a collection of unincorporated territories with their own distinct culture and national identities. Despite not being considered U.S. states, these overseas areas are an integral part of the country, meaning all Americans traveling from the continent are welcome – with or without passports.

When traveling from the U.S. to any of these territories, Americans are only required to present a valid ID. Starting May 3, 2023, all air travelers 18 years of age and older will be required to present REAL ID for flying within the U.S., such as a verifiable, REAL ID-compliant driver’s license, a state-issued EDL, or ordinary U.S. passports.

The U.S. territories accepting national ID cards for travel are:

One of America’s favorite Caribbean destinations, Puerto Rico has recently dropped all Covid vaccination and testing requirements for mainland arrivals, allowing domestic visitors to enter restriction-free. Additionally, as it is an unincorporated U.S. territory, the island does not expect mainland Americans to carry a passport for identification.

Several nonstop flights to Puerto Rico are available from every major U.S. city, including Austin, Charlotte, Chicago, Dallas/Forth Worth, Miami, New York and Philadelphia, just to name a few. Some of the most famous landmarks include the colorful Old Town In San Juan and Spanish colonial fortresses.

Like Puerto Rico, the triad of Caribbean islands that make up the U.S. Virgin Islands archipelago are open with no health requirements. Luckily, there are direct flights to St. John, St. Croix, and St. Thomas from cities like New York, Miami, Washington, Chicago, Orlando, Atlanta, Philadelphia, Houston, Dallas, Baltimore (and many more).

Right now, all that Americans need when traveling to U.S. Virgin Islands is a driver’s license, or other state photo identity cards issued by the Department of Motor Vehicles, when not in possession of other travel documents. From May 2023, REAL ID requirements will start applying to air passengers visiting the archipelago.

Ever heard of the small, picturesque Micronesian island that is Guam? It may be more challenging, and somewhat more expensive to visit than other destinations on this list, but it is yet another tropical hotspot allowing U.S. citizens to visit completely visa-free, and without requesting new passports in advance: national IDs are more than enough.

A U.S. overseas territory, it is home to some of the nation’s most beautiful beaches, incredibly well-preserved Spanish-era monuments and other sites of historical relevance, such as Asan Beach, where crucial World War II (WWII) events took place. Direct flights are only available from Honolulu with United Airlines.

A group of 14 islands in total, out of which only 3 are developed tourist destinations (Saipan, Tinian and Rota), the U.S. Northern Mariana territory boasts sandy beaches, clear waters that are perfect for swimming, numerous dive sites and wildlife sanctuaries – a beautiful setting that hosted the Battle of Saipan, one of the bloodiest in WWII.

The only way for Americans to reach the Northern Marianas traveling on a verifiable driver’s license or other equivalent ID is taking a flight from the mainland U.S. to Honolulu, then onward to Guam, and finally to Saipan International Airport, serving the island of Saipan. All other flights leave from mainland China, Hong Kong, or South Korea.

The American Samoa is a collective of seven South Pacific Islands graced with volcano views, tropical moist forests, and immaculate beaches where overtourism does not seem to be a concern. Pago Pago, the regional capital, provides the American Samoa’s only access to the outside world, with direct flights to and from Honolulu with Hawaiian Airlines.

As a U.S. unincorporated territory, these islands rely heavily on domestic tourism, with a majority of attractions centered in the capital and surrounding villages. From Pago Pago International Airport, visitors can fly to Fiti’uta, in the island of Taʻū, and Ofu, where secluded beaches and impressive nature can be found.

As Guam only has domestic connections to other mainland U.S. cities via Hawaii, and domestic flights to the Northern Mariana Islands, in turn, only depart via Guam, U.S. citizens flying without their passports must book tickets that do not include airside transit, or stopovers, in any territories that are not within the United States.

For more information on travel documentation, please visit the Transportation Security Administration (TSA) website, where official guidance is available. When going abroad, Americans are advised to carry valid passports, even when other agreements are in place, as it is the most widely recognized document for international travel. 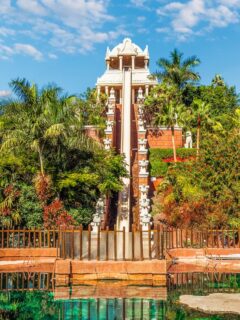 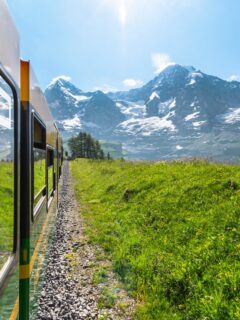 Next
These 5 Sleeper Train Routes Are Your Best Bet For Exploring Europe This Summer
Click here to cancel reply.

of course, still need the vax for Canada.

From your article you would think you can go to Cancun without a passport but you can't. There are limitations on how far you can enter beyond the border, which is either 60/90km if i remember correctly.