A volcano has erupted in St. Vincent and the Grenadines Friday morning, spewing clouds of ash and smoke for miles and forcing thousands to evacuate.

Three major cruise lines have sent ships to help evacuate residents impacted by the eruption to nearby island nations.

The volcano, known as La Soufrière, is on the northern tip of St. Vincent, the country’s main island. St. Vincent and the Grenadines comprises 30-plus islands and is home to more than 100,000 residents.

La Soufrière is one of 19 active volcanoes in the eastern Caribbean.

After being dormant for years, the volcano started showing signs of activity in late December, according to the New York Times. Scientists have been monitoring the volcano for seismic activity since then.

The Prime Minister of St. Vincent and the Grenadines, Ralph Gonsalves, declared a red alert on Thursday after seismologists warned that the volcano showed signs of an imminent eruption. He issued an evacuation order for thousands of residents in the northern area of the island.

The National Emergency Management Organization (NEMO) of St. Vincent and the Grenadines warned of a “substantial prospect of disaster” on their Twitter feed, advising residents to “be ready, get your things in order.”

The organization confirmed that the volcano moved into an explosive state on Friday morning on Twitter, just 4 days shy of the anniversary of its previous eruption on April 13th, 1979.

The country’s prime minister ordered a full evacuation after officials raised the alert level on Thursday.

A representative for Carnival Cruise Line said in a statement to Cruise Radio:

The company “has agreed to send two ships to St. Vincents to support humanitarian efforts to evacuate residents who are under threat from the volcanic eruption of La Soufriere. Carnival Paradise should arrive to St. Vincent by 11 a.m. local time on Friday, and Carnival Legend should arrive by approximately 2 p.m. on Friday. Each ship will accommodate up to 1,500 residents who will be transported to neighboring islands which have agreed to offer refuge out of harm’s way.”

The spokesperson went on to say that “all precautions will be taken to protect the health and safety of Carnival crew and the passengers who board the ships.”

According to the statement from Royal Caribbean Group, both Royal Caribbean International and Celebrity Cruises are working closely with St. Vincent authorities to assist residents impacted by the eruption.

Royal Caribbean International’s Serenade of the Seas and Celebrity Cruises’ Celebrity Reflection arrived on the island Thursday evening to help transport some of the 16,000 people who were forced to evacuate.

Prime Minister Gonsalves said that in order to board the cruise ships, evacuees must be vaccinated and that the nearby island nations planning to accept refugees will also require vaccinations. Those include St. Lucia, Grenada, Barbados, and Antigua.

According to officials, close to 20,000 people had been evacuated from the area surrounding the volcano as of Friday morning.

The timing works well for the cruise lines, who have largely remained out of service since the start of the coronavirus pandemic. Royal Caribbean has announced it will sail from multiple destinations outside of the United States by summer due to the CDC’s strict guidelines which have made it impossible for cruise lines to restart operations. Carnival has also threatened to pull out of the U.S. entirely if things don’t change. 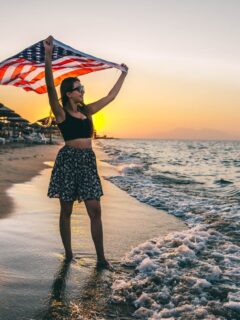 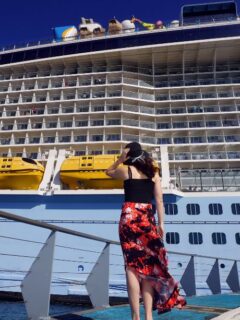 Next
Royal Caribbean Suspends Most Of Its Cruises Until July
Click here to cancel reply.

Omg did I read that correctly? They will only be rescued if they are vaccinated?? The world has officially gone completely mad.

@Gemma, This is how the world will be divided going forward. People don't want to draw these parallels but as a society we've seemingly agreed that segregation was wrong whether it was racially segregated seating or ghettos to house certain people and yet here we are again.

@Gemma, I double checked if that is true with the latest news, because my previous post has been removed, and it is indeed confirmed by prime minister Ralph Gonsalves that only vaccinated people would be evacuated. Considering that this island has a low vaccine rate, this also means that unvaccinated children wouldn’t be allowed to be evacuated on those ships. I wonder if this case would go to the international courts of human rights.