Royal Caribbean Cruises have brought back the self-service option to its buffets on board its ships – with passengers now able to once again serve food themselves.

Just as the entire tourism industry has been affected greatly by the ongoing Covid-19 pandemic, the cruise world is certainly no different – with cruise ships in the U.S. having been subject to suspensions and restrictions for the last two years.

With the operations of all cruise lines having originally been suspended at the start of the Covid-19 pandemic – back in March 2020 – all U.S. cruise companies were forced to cancel their cruises for the remainder of that year.

And, it was not until June – last year (2021) – that cruises began to operate, with Royal Caribbean actually becoming the first to get approval to restart ‘test’ cruises from the Centers for Disease Control and Prevention (CDC).

However, once cruises were once again allowed to set sail, things were far from ‘normal’ – with cruises having to adhere to new guidelines issued by the CDC.

Although cruise companies have had to adhere to somewhat strict guidelines – including vaccine requirements of its staff and passengers, as well as social distancing measures – Royal Caribbean Cruises never actually removed buffets from their catering options.

The Chairman and CEO of Royal Caribbean Cruises Limited, Richard Fain, had previously announced that his cruise company’s buffets would instead “evolve”.

And, indeed they did – with passengers no longer serving themselves, but instead being served food from the buffet by cruise ship staff.

This measure was taken to prevent the same food utensils being handled by many people – which would increase the risk of transmitting Covid-19.

Self-Service Buffets Are Now Back On Board

Having reported at the end of last month (31 March) that the CDC had removed all of its travel advisories for cruise ships – Royal Caribbean Cruise line has now brought back the self-service option for its onboard buffets.

Since last week (2 April), passengers have once again been able to serve themselves at buffet on board Royal Caribbean cruises – with the company providing a statement to RoyalCaribbeanBlog.com confirming the news:

“On cruises departing on or after April 2, 2022, Royal Caribbean International will bring back self-service dining in guest-favorite venues on board, including the Windjammer Marketplace, Solarium Bistro, and at private destinations.”

“Grab-and-go dishes and single serving portions will continue as a permanent offering – they have become popular options, and keeping them is among the top requests from our guests.”

What Are Other Cruise Lines Doing With Their Self-Service Buffets?

Other major cruise companies – such as the likes of Carnival and Norwegian Cruise Line – have been offering the self-service option at the buffets on board their ships since last year.

Disney cruises also announced last week that they were bringing back self-service buffets on their ships, as well as removing the requirement to wear a face mask when in any indoor areas onboard.

To celebrate the construction of its new mega cruise ship – Icon of the Seas – a keel-laying ceremony was held in Finland, at the Meyer Turku Oy shipyard last week.

Set to be powered by liquefied natural gas (LNG), Icon of the Seas is expected to set sail in 2023.

And, this follows the launch of Royal Caribbean’s Wonder of the Seas – which took place last month (March) – with the vessel currently holding the title of being the world’s largest cruise ship. 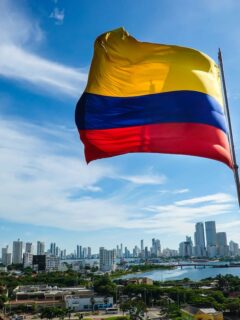 Previous
Colombia Continues To Grow In Popularity With American Travelers 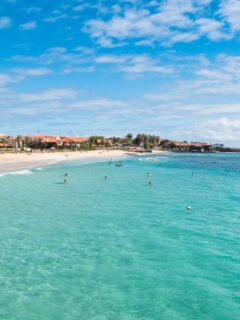 Next
5 Off The Beaten Path Destinations In Africa Open For Tourism
Click here to cancel reply.

Why does royal Caribbean cruise line still require a negative Covid test if the CDC guidelines have been removed?