Air travelers at Toronto Pearson International Airport are being advised to arrive for their flight three hours prior to departure for all flights scheduled before 9 in the morning. But, according to some recent experiences, this timeline may not be enough.

TikToker @mirandelz recently traveled through Toronto Pearson and barely made her flight even though she arrived over three hours early; at 3 a.m. for her 6:30 a.m. flight departure.

She documented her experience from last week on TikTok and it’s already at over 400,000 views so far, revealing to viewers the reality of travel delays at Canada’s largest airport.

Her video is captioned detailing her experience on Thursday, May 19th at Terminal 1 of Toronto Pearson Airport, for a flight to the United States with Air Canada.

made our 6:30am flight with 20 mins to spare after arriving 3.5 hours early @ Pearson Airport

The TikToker’s first stage of her long wait was at baggage drop-off. With no available airport staff and no counters open, travelers were stuck just waiting at the airport in the early hours of the morning.

“We waited in the baggage line until 4:30, just sitting there on the floor, and lines were just piling up because there’s no workers and nothing was open.”

After finally being able to drop off their bags, @mirandelz and her travel companion headed to the security line only to be welcomed with even longer lines and crowds.

In her video, she claims that the security lines that she witnessed at the airport were “absolutely absurd.” She showed in her video that “people were literally running to make sure that they claimed their spot in line.”

Because of her stressful experience, she made the recommendation in her video to split up if you’re traveling in a group and have someone claim a spot in the security line while the other waits at baggage, just to save time.

After seeing the massive lines at security and with less than two hours until their flight, they went to the front of the line because she had NEXUS status. For those who don’t know, NEXUS is a program that allows pre-screened travelers to expedite the border clearance process when entering the US and Canada.

While she had NEXUS but her friend didn’t, they asked if they could both clear security in the NEXUS line and were able to avoid the long wait in the security line, which the TikToker stated in her video that “we probably would have had to wait in this line for two to three hours and we just didn’t have time for that at that point.”

They eventually arrived at the gate for their flight only 20 minutes before departure time. So despite arriving three and a half hours early and using the NEXUS line, they still barely made their flight to the US.

And the TikToker accounts her NEXUS status as the main reason for making their flight. At the end of her video, she comments that “I don’t know how everyone else is doing it.”

She also notes in the comments section of her now viral video that the long wait times should only affect travelers before 9 a.m. and that the lines at the airport aren’t necessarily that long throughout the day.

A few users commented on her video stating that they’ve had similar experiences; others claiming that they were able to pass through security in less than 30 minutes.

Airport Delays Are Due To Security Staff Shortages, Amongst Other Things

Whether or not the delays are only happening in the early morning hours, officials at Toronto Pearson as well as local transportation agencies have been warning at air travelers to arrive very early for their flights out of the airport, citing staff shortages.

The Canadian Air Transport Security Authority (CATSA) along with the Greater Toronto Airport Authority (GTAA) have issued advisories this month for travelers to arrive at the airport “well in advance” before their flight.

The warning currently issued on the CATSA’s website advises travelers to arrive at least two hours ahead of time to catch domestic flights, and three hours for any US and international flights.

While travelers are struggling with long wait times at departure, many are also dealing with some of the longest flight delays seen since before the pandemic.

According to a report yesterday in Global News Canada, international flight delays at the airport jumped by a factor of 275 this past April compared to three years ago in April 2019. Local officials are calling on the federal government to assist them with the massive delays.

As the busy summer travel season approaches and more people are eager to take a vacation, the number of travelers arriving at the airport on any given day won’t be going down any time soon.

If you will be traveling to Toronto Pearson soon and want to see the status at the airport before heading out, you can check the CATSA/ACSTA website for the current wait times.

CDC Issues Travel Advisory To These Countries Due To Monkeypox 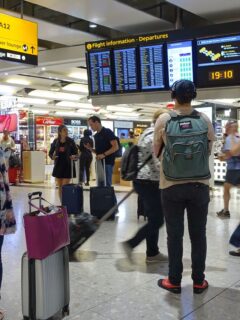 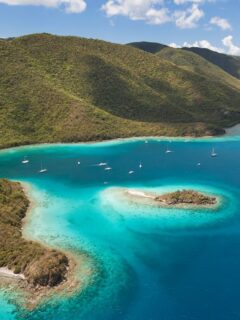 Next
These 4 Destinations Have Have Recently Eased Entry Requirements
Click here to cancel reply.