Top 10 Destinations From Movies That Inspire You To Travel

It’s safe to say that most of us have been watching a little more TV than we normally would. When travel is more difficult, movies can give us that sense of adventure and escapism that we miss from getting to go somewhere new.

Movies centered around travel can have this effect even more than other films. Many movies over the years have been filmed in beautiful vacation spots. If you’re looking for some inspiration for your next trip, look no further than these remarkable filming locations.

Here are our Top 10 Vacation Spots from all over the world from movies that inspire wanderlust.

1. Under the Tuscan Sun

Filmed at Villa Laura, a stunningly restored 17th century estate in Cortona Tuscany, this movie will make you want to walk through a vineyard at sunset. Cortona Tuscany, which sits in the southern region of Italy, is full of sunshine and culture. The city is surrounded by stone walls that have their origins in the Roman Empire, and it looks down into a beautiful valley below.

2. The Secret Life of Walter Mitty

This movie frequents people’s top ten favorite travel movie lists for one simple reason – Iceland. The movie was shot in a dozen different locations across the country of Iceland. Small fishing villages, like Garður, which hosts one of the oldest lighthouses in Iceland, and glacial lagoons and volcanoes set the stage for this movie about a man who finds himself through adventure.

Is there a movie that’s considered to be more of a classic than Casablanca? This black and white drama from 1942 has some of the most iconic actors, lines, and settings in cinematic history. Even though the whole movie was filmed on a sound stage in California, it still inspires a sense of awe for Morocco. Casablanca is the largest city in Morocco. The architecture of this seaside city is enough to impress any visitor. Spend time walking through the markets and take in the mosaics on the walls of the buildings. Or go to the shore!

Paris ranks highly on almost everyone’s list of travel destinations. And movies like Midnight in Paris are part of what brings it its status as the most romantic city in the world. Paris has long been a haunt for artists of all kinds. Midnight in Paris brings its audience back to the days of the great artistic clubs of Paris in the 1920s. This movie will make you want to walk up the rue de la Montagne Sainte Geneviève in the moonlight.

This classic Audrey Hepburn movie takes its viewers all over the city of Rome on a Vespa. After watching this movie, you’ll want to walk down the longest and widest staircase in Europe, the Piazza di Spagna. Visit the Colosseum or see the frescos at the Palazzo Colonna Gallery. Or, if you’re feeling brave, place your hand into the Mouth of Truth, a sculpture on the side of the Santa Maria church in Rome known for its ability to spot the truth-tellers from the liars.

Being animated doesn’t stop this beloved Pixar movie from making viewers wish for the waterfalls of South America. The fictional Paradise Falls in the movie is based off of Angel Falls in Venezuela. Angel Falls is known for being one of the four most beautiful waterfalls in the world.

Showing off many stunning locations, from grand cities to the beautiful countryside, Crazy Rich Asians will make you want to tour Southeast Asia in style. Stop at the Supertree Grove in Singapore, where you can tour the vertical gardens for free from ground level or for a small fee from a skywalk. Or visit the beaches of Langkawi, a more remote filming location about an hour-long flight from Kuala Lumpur.

Filmed in iconic spots all over LA, La La Land’s old-Hollywood glamor showcases some of California’s most well-known locations. Dine at the Smoke House restaurant, where the characters in the film spend time playing the piano. Or visit the Griffith Observatory, the scene of the famous dream sequence of this film.

This movie showcases many parts of the world. But some of the most stunning imagery in the movie comes from locations in Bali. Settled in long stretches of rice paddies and lush ravines, Ubud, Bali is featured heavily in this film. Take a trip to the Ubud Monkey Forest, a nature reserve located in an ancient sanctuary, or walk along the vibrant green rice terraces.

This movie shows off city and countryside locations all over Ireland. Some of the most well-loved scenes in the movie take place on the gorgeous cliffs of Inishmore, the largest of the Aran Islands, and in the town of Kilmurvey, which is filled to the brim with picturesque stone buildings.

Mexico Travel Restrictions: What Travelers Need To Know In 2021 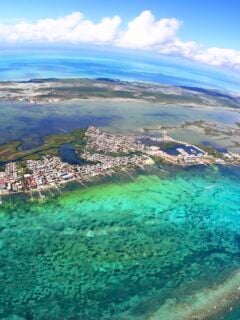