Out of concern they will not be able to cope with a rising travel demand, and in order to protect other important routes, American Airlines has made the painful decision to suspend four of its most popular international flights. While two of them will be unavailable during winter only, the others were either paused indefinitely – or worse, axed forever.

As if that weren’t enough, the airline is pulling out of three U.S. cities amid a major network shake-up, unceremoniously severing vital links between smaller domestic hubs and larger airports. The first post-Covid summer may be completely restriction-free, as promised, but cancellations and travel disruption continue widespread across the industry.

American’s latest scale back is yet another proof of that:

American Drops 3 U.S. Cities From Map While Suspending A Number Of International Routes

Citing staffing constraints and, more importantly, pilot shortages, American Airlines is dropping three routes and ‘temporarily’ halting service on five others, both domestic and international. Three of those are paused indefinitely, while two are unavailable through winter 2022. Below, you will find a list of all affected destinations and their current status:

Judging by the airline’s recent announcements, which include new flights to Cozumel, in Mexico, and two destinations in Jamaica, the Dominican Republic no longer ranks high on their list of priority destinations right now, with a majority of American travelers set to fly to Mexico instead this summer.

Dealing another heavy blow to regional airports, which are among some of the most affected by cuts and trimmed schedules during the worsening aviation crisis, American Airlines is also dropping a further three U.S. cities from their route map altogether. Effective September 7, the airline will cease serving the following hubs:

According to an American Airlines spokesperson, the company made the ‘difficult decision’ to withdraw from the three cities as it struggles with staff shortages, affecting not only them but every major airline in the U.S. at present. They have reassured customers they will ‘proactively reach out’ to them after September 7 to offer ‘alternate arrangements’.

Passengers from both Islip and Ithaca relied on the availability of intra-U.S. flights to access major networks, within the U.S. and abroad, while Toledo residents are left with no choice but to drive two hours to Cleveland when vital links are cut. Now that one of the largest airlines in America has given up on them, logistics could become a lot more complex.

Envoy Air, American’s regional affiliate, had historically connected Toledo’s Express Airport to Chicago O’Hare (ORD), one of the busiest in the States. Sadly, even after having established a strong presence in this market over many years, and offering Toledo’s only gateway into the world, American Airlines saw no other choice but to shut down all operations.

Similarly to Envoy, Piedmont Airlines provided easy links to Philadelphia (PHL) from both Tompkins International Airport, in Ithaca, and the Long Island MacArthur Airport in Islip. Those will no longer be available come September 7, when the changes will be enacted and American Airlines is due to end the aforementioned service.

Toledo Is Now Effectively Cut Off From All Major Flight Networks

It’s not all bad for the New York cities, as they will remain connected to the networks of at least 4 big U.S. carriers. Southwest Airlines will continue operating in Islip, alongside Frontier and Breeze, and Ithaca still has Delta Connection and United Express as backup now that American is leaving for good. Conversely, connectivity has been seriously reduced in Toledo.

Once American Airlines halts operations in the city, ultra low-cost airline Allegiant Air will be the only airline present in the city. Flights are only available to a handful of other small U.S. hubs, such as Orlando/Sanford, Phoenix/Mesa, Punta Gorda in Florida and St Petersburg/Clearwater – we’re afraid the two-hour drive to Cleveland is the least stressful option here.

The presence of strategic route maps that benefit smaller airports is paramount for regional connectivity, something that has come under threat again as the industry seeks to readjust overambitious schedules following an unprecedented surge in passenger numbers. Unfortunately, local hubs should brace for far greater future challenges yet to come. 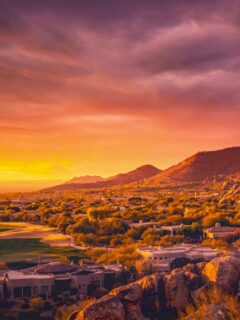 Previous
Top 7 Off The Beaten Path Things To Do Indoors While Visiting Phoenix, AZ

Next
These European Hotspots Are Limiting Tourists Due to Overtourism
Click here to cancel reply.