In a new effort to speed up security ahead of what’s shaping up to be a record winter for tourism, Cancun Airport is opening E-Gate lanes to allow Americans to travel seamlessly to Mexico. Soon enough, they will no longer be subject to thorough checks transiting the hub, and wait times should be reduced drastically.

For months now, Cancun International has been investing heavily in infrastructure, claiming the title of smoothest entry point into Mexico due to four very simple reasons: it probably has more immigration staff than any other airport in the country right now, transit times have improved, the dreaded FMM form was removed, and of course:

Screening is being automated and made more efficient as a matter of urgency, especially now that it is predicted to sell out for the season.

Cancun International is the busiest airport in Mexico currently, so it’s no wonder Mexico’s National Migration Institute (INM) has chosen Cancun International to participate in its new Electronic Gate Program. As part of the program, travelers could soon be allowed to cross the Mexican border without being interviewed by an immigration officer.

Electronic gates or E-Gates are self-service border checkpoints available in international crossings, such as airports or train stations, that look set to replace guards in the near future. When safely implemented, E-Gates can minimize disruption caused by bottlenecks at arrivals, as passengers are able to easily scan their way into countries.

Some of the world’s most popular tourist destinations have already installed E-Gate systems, including France and Italy, which allow Americans to use automated passport control lanes traveling via select airports, the United Kingdom, and many more. It’s only natural that Cancun, America’s favorite vacation hotspot, should be next.

Cancun Airport Is A Trendsetter

According to Roberto Gonzales Lopez, responsible for the INM Office in the state of Quintana Roo, home to Cancun, only two airports have been deemed worthy of the trial, the other one being Mexico City International. Nevertheless, all eyes are on Cancun as it prepares to host nine million guests in the peak season alone – namely, January through April.

Earlier this year, Cancun became the first international hub in Mexico to eliminate Mexico’s bureaucratic immigration form, which visitors had to fill out upon landing before proceeding to passport control. The applauded move would later influence other Mexican destinations, such as Puerto Vallarta, to get rid of their own forms.

This is proof that Cancun is a regional trendsetter when it comes to airport management, and the fact it is now preparing to transition from the customary manual checks to a digital border could have positive repercussions across the entire country. Mr. Lopez confirmed the process has begun and that it will ‘further reduce immigration times‘.

As much as we love Cancun, there’s no denying arriving at this airport can be stressful, particularly over the winter period when a majority of families seeking a sunny escape flock into the Riviera Maya. Things usually get so chaotic we had to write our own ‘survival guide‘ to Cancun Airport, but we’re hoping to revise it soon once these new E-Gates are up and running.

Mr. Lopez has stated travelers should be allowed to enter Mexico ‘within half a minute on average‘ by the time implementation is completed. Based on other E-Gate screening processes available to Americans worldwide, they will be required to carry a valid biometric passport, as well as proceed with the following steps:

As long as there are no issues flagged by the system, the border gates will open, and you’ll be free to cross into Cancun. In the unlikely event an American is selected for inspection, they will be required to speak to an immigration officer, who will then assess whether they are a genuine visitor or not.

Overall, the total processing time will be around 30 seconds. 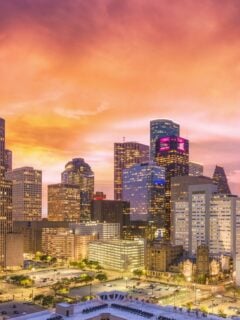 Next
Top 7 Off The Beaten Path Things To Do In Houston This Fall
Click here to cancel reply.

..And what is the plan for those of us who still want to get entry and exit stamps after getting “scanned”? The whole point of traveling is to get your passport stamped!!! Will they provide self-stamping kiosks after immigration, for those interested (since we were already granted official entry)? Or will there be optional payment for those who are even willing to do so (thereby increasing incentive to continue a valued service while also increasing revenue for the airport)? Or how about further acceptance of souvenir-type passport stamps? ...so that we don’t return home with (LITERALLY!) nothing to show for it, as we bring back a passport full of empty-a$$ pages! IDIOTS !!!

I AM NOT THRILLED. Scanning your face and finger print put them in database and voila! It feels like technology encroaching more and more into our live i.e., living in the Matrix or the biosecurity grid. I wonder everyone want to give away their privacy for convenience. I bet you are. I don't.

@James, well line up for 2 hours in an immigration queue then!