Although observing a 100 ml rule for liquids and removing electronics from bags ahead of security screening at airports have become almost instinctive for travelers, new technology being trialed at some airports could soon allow these rules to be scrapped for good.

While younger travelers may not be aware there was a time they were not originally in place, those who have been collecting passport stamps since before 2006 might remember the terrorist plot that led to their introduction that same year. Since then, air travel has never been the same.

New Technology Has Already Been Introduced In Some European Airports

16 years following its roll out, select airports around the globe have already begun to lift their flight liquid rules, as new ‘state-of-the-art computer tomography‘, or CT, starts being used. In fact, one of the first hubs to have officially adopted CT is Shannon Airport in Western Ireland.

Even though CT has been around a while, being first trialed at larger international hubs like London Heathrow and New York’s JFK, Shannon managed to outpaced these major airports in their gradual rollouts and fully implement the technology.

While the world struggled to cope with a sharp rise in Covid cases led by the Omicron variant, and the greatest concern for many was the increased health risk related to air travel, this Irish hub quietly installed the new scanner at a cost of $2.6 million, and has been quick in mastering its use.

Since then, it has allowed passengers flying out of Ireland to keep both their liquids and electronics in their own bags when passing through security, without having to remove them and/or place them in plastic bags or separate trays. Needless to say, Shannon customers are now whisking through security.

Although it is only the third most important airport in Ireland, Shannon is an unsung pioneer, having opened the world’s first Duty-Free shop all the way back in 1947, while in 2009 it also started providing customers full U.S. pre-clearance. Now, it is again inspiring change among its counterparts.

Shannon Airport Could Be Leading A Silent Revolution

According to Nandi O’Sullivan, Shannon Group’s Head of Communications, the lifting of the liquid rule ‘is one of the projects Shannon Group took on during the period of severe travel restrictions on aviation’. At the time, when Europe still faced lock downs and applied strict entry rules, this barely made the news.

Now that air travel has resumed, however, and most of Europe has dropped all travel rules, Shannon’s initiative is finally gaining traction. As reported by the CNN, Donegal Airport, yet another transportation hub in Ireland, has now followed Shannon in installing the same technology and lifting the liquid rule.

In comparison, London Heathrow has targeted 2022 as the year it will fully transition to CT, with investment in needed infrastructure totaling $62 million. Heathrow’s move comes much later than Shannon’s or even Amsterdam Schiphol, one of its strongest competitors in mainland Europe.

Schiphol has been using CT technology since 2020, which means passengers are no longer subject to liquid restrictions when flying out of Amsterdam. Still, airport officials continue to urge them to follow old rules ‘to avoid problems when flying to other jurisdictions’, an advice likely to change once more airports lift their own liquid bans.

As Kevin Riordan, a global leader in CT technology states, these changes ‘will not come fast or universally’, and will feel more like a ‘changing landscape’. The UK, for instance, is only planning on fully implementing this technology by 2024, even though its busiest airport – Heathrow – will already scrap liquid bans in as early as 2022.

One of the reasons behind the gradual rollout most airports opted for is the cost of implementation. Transitioning into CT is not cheap and some airports, mainly smaller ones that have suffered heavy losses during Covid, may not have sufficient funds to invest in innovation right now.

Riordan reiterates the process will be ‘different in different global regions’ and happen at ‘different speeds‘. Simultaneously, with both Shannon and Schiphol paving the way forward and proving themselves successful business cases, more airport managers could feel empowered to join the trend. In Riordan’s opinion, ‘it’ll likely be sooner rather than later’.

So How Does The New More Advanced Technology Work?

The more advanced technology works similarly to CT scans found in hospitals, replacing the conventional 2D X-ray at airports with a more accurate 3D image. As specialist Riordan says, ‘you can get a lot of information from a 2D image but if you’ve got a 3D object in your hand you get a lot more information’.

The CT used in both Shannon and Schiphol now allows security staff at airports to make more precise assessments on the nature of the materials in any particular bag, and whether present liquids are a potential threat or not. For Riordan, this means better security and staff making more well-informed decisions.

As the Head of Checkpoint Solutions at Smiths Detection, the company behind Shannon Airport’s security equipment, he concedes that are still some practical challenges to be overcome, especially now that travel demand is at an all-time high following two years of Covid restrictions.

Ireland is one of those European countries with no entry requirements in place, and like many popular destinations, it has been dealing with an unprecedented surge in bookings. With that in mind, Riordan predicts a chaotic summer ahead, as passenger numbers are recovering much quicker than expected, while staffing shortages have also become more common.

It is due to affect not only airlines, but also security suppliers like Smiths Detection, as they work to perfect their own technology amid a higher demand at airports. In Riordan’s own words, staffing constraints ‘puts pressure on us to design operations that are much more efficient’.

At Shannon Airport, it has been noted screening time could be halved with CT, as security lines will move much faster without all the unpacking and packing again. Nevertheless, staff is still needed to manage security and operate the technology, and that has proven to be a challenge as airports in general struggle with staffing constraints.

Offering a solution, Riordan suggests putting a stream of bags through a machine while images are sent to three or four different operators, as opposed to just one operator per machine, as ‘one way of trying to compensate for this lag in staff and increase in passengers’.

One way or another, it is looking ever more likely the era of strict liquid limits on flights and laborious airport screening will come to an end. Maybe not this year or the next, but gradually over the next decade. For now, lucky passengers can already get a taste of what flying pre-2006 felt like when transiting Shannon or Schiphol.

U.S. Travelers Will Need REAL ID Cards To Board All Flights Starting Next Year

Airlines Can Legally Deny You Boarding For These Reasons 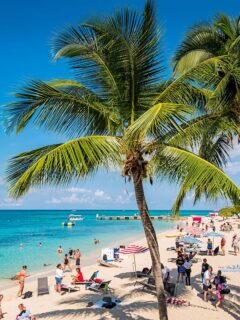 Previous
Montego Bay, Jamaica Named As One Of The Top Destinations For Americans 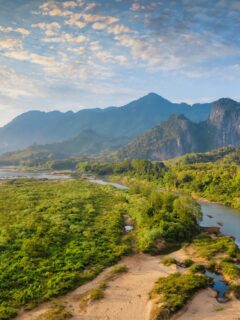 I'm a TSO in the USA, CT X-ray can't determine the contents of a container, just the size. The 100ml limit was established for many reasons, mainly to limit the amount of possible explosive or incendiary substance that could get on a plane. Almost any quantity can be in checked bags, with certain limitations. Additional screening would be needed beyond CT scans. Literally millions of water bottles would have to be screened by a separate process to allow that to happen, adding additional time to each passenger screening. With CT, liquids within the limit would not be required to be removed from carry-on, same for large electronics. Over limit containers (soft drinks, water, shampoo, alcoholic beverages over 100 ml etc) are not allowed past the checkpoint with very few exceptions. ASKTSA on Twitter and Facebook as well as www.tsa.gov are the definitive sources for information.

@Larry, guess what? Israel, the target of more terrorism than any other country in the world, has never banned liquid at all. That’s right… I can walk right through security with a full 2 liter bottle if I want. However , their airport security is the tightest in the world. They interrogate every single passenger individually, as meaningful questions, and use the most advanced technology. I’m thinking if liquid were such an imminent danger, a country like Israel, who literally advises the rest of the globe on counterterrorism, would have noticed, ya know? The liquid limit is BS and always has been.

@Larry, yes ask the same geniuses who have been throwing all these supposedly dangerous liquids into the same trash can next to security. Great plan.

What is to stop someone from going through security 10 times? Nothing.

This policy has never been grounded in any reality.