UK Reopening Travel From May 17

With those from the European Union and travelers from regions such as the US soon to be able to travel more widely, those from the UK – confined to their island by strict no-travel laws – can only look on in envy. However, their wait for a holiday might not be for much longer.

Speaking yesterday, the UK’s Prime Minister Boris Johnson revealed that some foreign travel options will be open from May 17th – although the government is taking a very cautious approach to restarting travel.

Here’s what we know so about the situation so far, including a breakdown of the travel rules for each colour category.

The UK And Travel – A Re-Cap For Travelers

A country of people proficient in the art of traveling, the past few months have seen British travelers forced to stay home, instead of heading for their usual haunts such as Spain and France. However, the decision to stay home is through choice, but by law. Coronavirus-related laws imposed by the British government have made it illegal to travel abroad for holidays, punishable by fines for those who try to break the rules.

With lockdown in the UK having recently been eased, travelers in the country have been counting down the days until May 17th, the date when British travelers may finally be able to travel abroad once more. And, whilst nothing has been confirmed yet, Boris Johnson gave the biggest hint so far that the possibility of travel from that date will be going ahead as planned.

“Some” Travel In May – What Travelers Should Know

Speaking on the political campaign trail in the city of Hartlepool yesterday, Boris Johnson gave a clear signal that British travelers would be able to take to the skies and the beaches once more from May 17th, but also spelled caution about the reality of the situation.

When pressed about the matter, he said:

“We do want to do some opening up on May 17 but I don’t think that the people of this country want to see an influx of disease from anywhere else.”

The UK is set to move towards a traffic light system in the coming weeks, which will determine the entry restrictions travelers face according to the threat Covid-19 poses in the country they are traveling from. Johnson’s quotes suggest that whilst travel will be opening up as expected, the options may be limited to just a handful of “safe” countries.

Government epidemiologist Neil Ferguson stated “If the two places are at comparable levels, then there is no particular risk associated with travel,” adding more optimism for somewhat ‘normal’ travel to resume between Green Light countries.

According to government sources, the number of countries placed on the UK’s “green list” – which would ensure quarantine-free travel between the two countries – could be in single digits, despite political pressure to include the whole of the continent. The approach the government is set to take has been labelled as “cautious”, but also one that can quickly change depending on how situations in overseas countries develop.

Which Countries Are Likely To Be Green-Listed?

The official Green List is set to be published on May 5 or 6 and will likely be larger than 20+ countries to start. However, as rates continue to plunge across Europe, most of the EU may turn green by the end of June.

It is thought that Portugal, Malta, and Gibraltar will be amongst the first countries to be placed on the UK’s green list, whilst Spain and France will initially be placed on the amber list. Those coming from amber-listed countries do not need to stay in mandatory quarantine but do need to self-isolate for 10 days upon their return.

It is not yet known which list the US will find itself on initially, but a coalition of both Europe and US-based travel groups have called for the reopening of the US-UK air travel market “as soon as safely possible.” The US recently issued a Level 4 travel warning for those thinking of heading to the UK.

Countries will be categorized as Green, Amber and Red, based on their level of risk and current case numbers. Once a country is given a traffic light color, travelers will have up to three weeks to return home under the current rules between any potential color changes. Color changes are done every 2 weeks, with an extra week in between to get home.

Travel from all countries will still require the passenger locator form.

Travelers coming from countries marked as green will not have to quarantine but will have to take a pre-departure test and a test on arrival.

Those traveling from Amber nations will have a 10-day quarantine, with the option of ‘testing to release’ at day 5. They will also have a pre-departure test, test on arrival, and either their test to release on day 5, or test on day 8 if they prefer to stay in isolation the entire 10-days.

Coming from a red country is still very prohibitive. A 10-day hotel-managed quarantine is required, with no ‘test to release’ options available, with a 2nd test upon arrival, and the 3rd test on Day 8 in order to end the hotel quarantine program on Day 10. 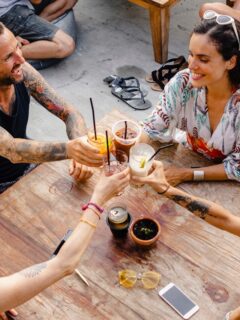 Previous
Top 10 US Foodie Destinations for 2021 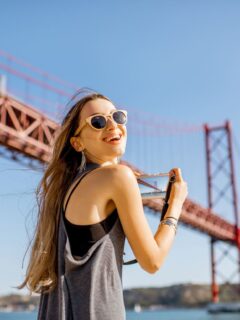 Next
Fully Vaccinated Travelers Do Not Need To Wear A Mask Outdoors In The U.S.
Click here to cancel reply.

Re: British Travelers, it is said above ... "However, the decision to stay home is through choice, but by law". By choice?

I wonder if this also means that anyone who lives in a green country would be able to travel to the UK without restrictions.

Very good point. I wonder if they will backtrack and release some vaccination exceptions because you're right, vaccinated travelers will absolutely choose the rest of Europe for simple ease.