Americans Can Travel To These 186 Countries Visa-Free In 2022

Several countries now seem ready to move on from Covid after being stuck in a two-year loop of restrictions and social curbs. Consequently, U.S. citizens who had been confined to their own country due to entry bans and complex travel rules are finally regaining their travel privileges – at an incredibly fast pace.

While the U.S. passport had lost a considerable amount of power during the pandemic, as foreign countries targeted Americans as risky travelers due to the spread of Covid, it has seen a strong rebound, and it is now an even more powerful travel document than it was in 2019. Currently, 186 countries welcome Americans visa-free, or with visas on arrival.

This does not equal restriction-free entry, but it does mean U.S. passport holders are not subject to a lengthy application process, Consulate interviews, and high visa processing fees. When traveling to these destinations, all Americans generally need is a valid passport, and other health documentation that may still apply:

How Is Passport Power Measured?

A majority of people may not be aware of this interesting fact, but all passport holders are not granted the same freedom to travel. Different groups of countries have bilateral agreements in place, allowing each others’ citizens to visit their territories more freely. On the other hand, certain nationalities not covered by these agreements face restrictions.

According to the Henley & Partners Index, the U.S. passport is currently the sixth most powerful in the world, up one slot from 2019. In practical terms, Americans can travel to 186 countries without requesting a visa in advance from a Consulate, out of a total country count of 195 countries. Effectively, they can roam the world effortlessly.

The most powerful passports comprising the top 20 include Japan (number 1 with 192 visa-free destinations), all European Union citizens (Germany ranks the highest at number 2), the United Kingdom, Canada, Australia, New Zealand, and other global leaders enjoying diplomatic prestige, like the UAE (15th) and Brazil (20th).

In comparison, Iran passport holders can only travel visa-free to 42 destinations, placing them as 102nd on the list. Iraqi nationals also have their movement severely restricted in the world, ranking at an even lower 111. In 2022, those holding Iraqi citizenship can only visit 28 other countries simply by presenting their passport.

Where Can Americans Go Visa-Free?

With a few exceptions – most notably the unfriendly Russia and Belarus – Americans can travel to Europe with very few limitations. In fact, some European countries like France and the U.K. even offer Americans fast-track entry and the possibility to scan their way in, without being interviewed by a border agent when landing.

The European continent comprises 50 or 52 nations, depending on the classification of certain autonomous territories, and Americans do not need visas to travel to 48 of them. Namely, U.S. citizens can easily hop on a plane bound for the Swiss Alps, stroll the magical streets of Paris, or go on a month-long Italy foodie tour only with their passports.

Turkey requires Americans to apply for an e-visa in advance.

A nationwide favorite, The Caribbean grants visa-free entry to U.S. citizens, and unlike Europe, there are no exceptions on the list. From the crystal clear beaches of Barbados, to the historical forts and colorful colonial towns of the Dominican Republic, this vibrant region loves Americans as much as Americans love them, and desperately wants them back.

Henley & Partners has included 24 nations and territories in the Caribbean, exclusively islands, and unincorporated U.S. territories where Americans can enter without passports. For that reason, the list below does not include other popular Caribbean destinations like Mexico, Belize or Colombia, that are part of the mainland.

Visa-Free Countries Americans Can Visit In The Caribbean

It is worth noting Barbados still has Covid requirements in place. Other Caribbean islands may enforce other travel rules as well.

From North to South, the Americas is a vast continent that for centuries has received an influx of migration from other territories. While North America’s History was shaped by the Anglo-Saxon, Germanic, Asian and African peoples, the continent’s South was envisioned as an extension of Southern Europe – mainly Spain and Portugal – in the New World.

It is possibly the most culturally unique continent in the world, due to its diverse demographics and amalgamation of influences. Luckily, U.S. citizens can visit 21 out of 22 American countries visa-free. The only country still requiring some type of visa is Bolivia, though it is generally issued upon arrival for a fee.

Visa-Free Countries Americans Can Visit In The Americas

Some major destinations in the Americas like Brazil have not yet fully reopened for tourism with no restrictions.

Although it has gained a reputation in recent years for being excessively strict with its Covid policies, Asia arguably remains the tourism playground of the world. Here, visitors are met with colossal temples, sprawling metropolises where anything could happen, some of the world’s most exquisite cuisine and surprisingly friendly locals.

Unfortunately, due to their hard stance on the pandemic, most Asian countries still have complex travel rules. Some like Japan even went as far as suspending visa-free entry for Americans, and all other visa-exempt foreign nationals. At present, the following Asian countries do not require U.S. passport holders to apply for an entry permit at a Consulate:

Cambodia, Laos, Nepal, Pakistan and Sri Lanka are some examples of Asian countries requiring visas on arrival only.

The Westernmost protrusion of the Asian continent, the geopolitical group called the Middle East has pretty lax, non-Covid entry requirements in place for American citizens. Out of 12 countries, U.S. citizens are granted unrestricted entry into seven, while the other five still allows Americans to obtain visas on arrival.

Much like Asia, the Middle East has retained some of its strictest pandemic-era policies. Nevertheless, the fact that Americans do not need entry visas to visit seven Middle Eastern destinations makes it much easier for them to extensively explore the region, provided that other Covid mandates are not in place.

Visa-Free Countries Americans Can Visit In The Middle East

It may not be one the easiest places to fly to, with some of its archipelagos being some of the most remote in the world, but a trip to the Oceania is definitely something all travelers, especially beach lovers, must experience at least once. Additionally, popular destinations in Oceania, such as Australia and New Zealand, are again open for American visitors.

In n Australia and New Zealand’s case, Americans must apply for a Travel Authorization in advance. This is not a visa, and applies to all nationalities that do not require visas to enter these countries, including Canadians, Brits and most Europeans. Applications are made online and the Authorization is usually issued in a matter of hours.

The continent of Africa may not be a massively popular vacation hotspot for Americans, but as we have detailed in our 5 Off The Beaten Path African Destinations article, it has a lot to offer and so much unacknowledged potential. North or South of the Sahara, visitors can take part in a number of activities, ranging from wildlife sightings to beach hopping.

African countries are also home to some of the world’s most important heritage sites, such as the El Jam Amphitheater in Tunisia, one of the largest and best preserved from Ancient Roman times, and the several millennia-old Moroccan cities of Fez and Marrakech – not to mention the History-packed nations of Egypt, Kenya and South Africa.

*These countries offer visas on arrival

As you might have noticed, Africa is the continent Americans have the less freedom to travel, with complete visa-free entry allowed in only 14 out of 54 nations.

When traveling abroad, Americans are advised to check all visa and entry requirements for their destination and ensure their passport expiry date complies with validity rules established by foreign countries. More information can be found on the U.S. Department of State, its Travel Advisories, or U.S. Embassies and representations in other nations.

Americans Can Travel To These Destinations Without A Passport

Previous
These Are Some Of The Most Unbelievable AirBnBs In Its New ‘OMG!’ Category 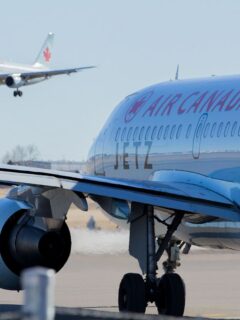 Next
Air Canada Announces They Are Cancelling Over 9000 Flights This Summer
Click here to cancel reply.

Suriname in South America also requires a visa in advance